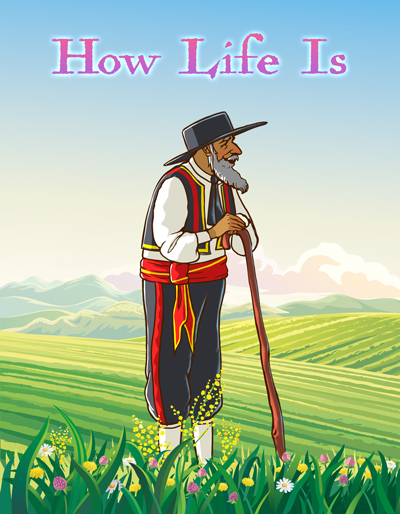 Once, a poor old man lived in a small town. Everyone was jealous of him. Even the kings from miles around were jealous because he owned the most beautiful white horse people had ever seen.

The kings all offered him riches for the horse, but the old man wouldn’t sell.

The poor man stuck by his word and never sold his horse.

One morning, he discovered that the horse wasn’t in the stable. The whole town gathered and laughed at the poor old man.

“Silly old man. We knew this would happen sooner or later. We knew someone would steal that horse. You should have sold it while you had the chance. What a tragedy!” cried the townspeople.

“Don’t take things so far,” the old man said “you can’t know any of that for sure. The horse isn’t in the stable. That is the fact. Everything else is your judgement. I cannot tell if what has happened is fortunate or unfortunate because this is barely a fragment. Who knows what is going to happen tomorrow?”

The townspeople laughed at him. They all thought he was crazy. However, after two weeks of waiting, the horse came back to him. It hadn’t been stolen, it had run away. When the white horse came home, it brought a dozen wild horses with it.

“You were right, old man. It wasn’t a misfortune. It was an excellent thing to happen.”

“Again, you are going too far,” the old man said. “The horse came back, but who knows if that is good or not? It's just a fragment. If you read a few words in a sentence, how can you judge the whole book?”

The townspeople couldn’t say much more, but they thought he was wrong.

The old man had a son who started training the wild horses. One week later, the boy fell from one of the horses and broke his leg. His accident left him with a limp.

“You were right,” they said. “That was a misfortune. Your only son has damaged his leg because of those horses. Now you are poorer than ever.”

“You’re obsessed with judging,” sighed the old man. “My son broke one of his legs. No one knows if it will be a disaster or a blessing. Life comes in pieces, and it does us no good to think more about it than that.”

As it happened, a few weeks later the whole country went to war. All the young people from the town were forced to join the army. The only one who didn’t need to leave was the poor man’s son; he couldn’t fight because of his limp.

The whole town cried out and complained that the war was a lost cause. They knew that most of the young people would never come back.

“You were right, old man,” they said. “It was a blessing. Your son stays with you. Our children have gone away forever.”

“You still keep judging,” said the weary old man. “No one knows what will happen. Your children have been forced to join the army, and my son has not. No one knows if it will be a fortune or misfortune.”

Do not judge, or you shall never be one with the whole. You will become obsessed with the small pieces and jump to conclusions. When you start judging, you have stopped growing.