Keloglan and the Magic Seal Meltem Basel and Anonymous 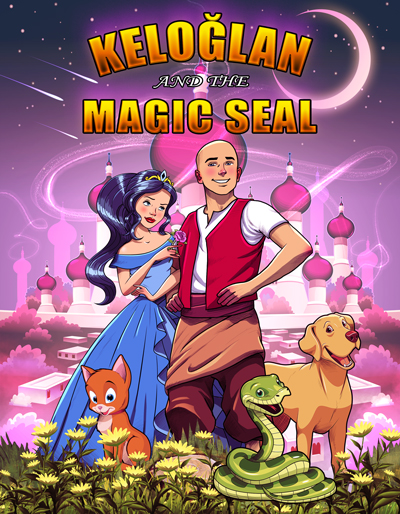 Keloglan and the Magic Seal 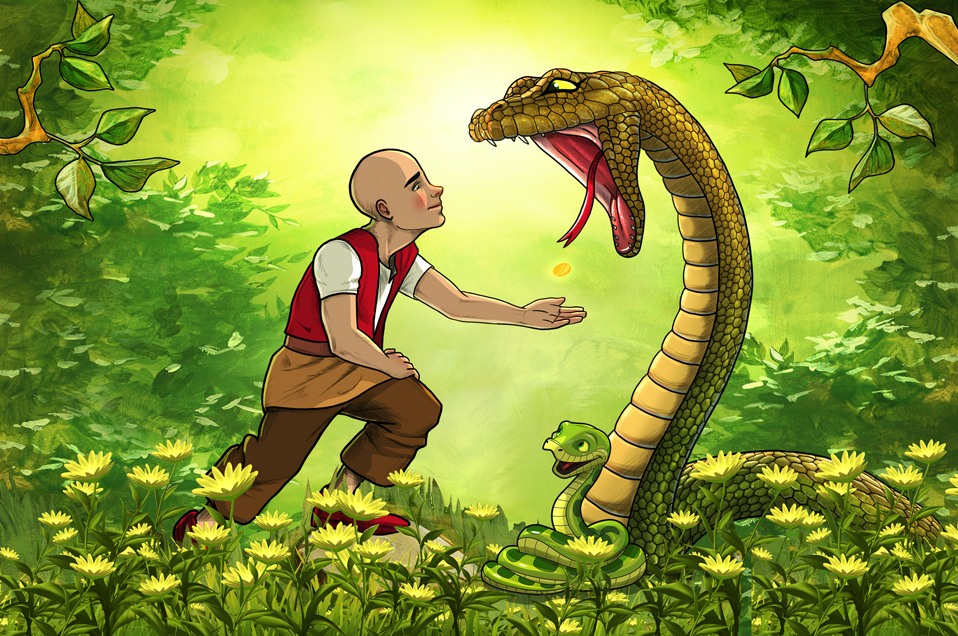 Keloğlan and the Magic Seal

One day, Keloğlan was walking back from the marketplace after selling his crops to the people of the neighbouring village. He had earned three gold coins that day and was pleased with himself because now his mother would be able to buy food and clothing to last through the long winter.

Suddenly, Keloğlan came across a group of men who were teasing a cat with a long stick. The cat looked very scared and was unable to escape.

Keloğlan walked up to the men and said in a kind voice: ‘Please stop teasing that poor cat. If you stop, I will give you a gold coin.’

The men agreed to put down the stick, and Keloğlan handed over a shiny gold coin. The cat was very grateful to the boy and walked by his side. He promised that if ever he was able to repay the boy’s kindness, he would jump at the chance. Keloğlan could not imagine how a cat might help him, but he agreed that the cat could join him. The two friends continued on their journey back to the boy’s home in the neighbouring village.

The boy and the cat walked for a few miles. Suddenly, they came across an old man and woman who were beating a dog because it had been barking too loudly. Keloğlan approached the couple and said in a kind voice: ‘Please stop beating that poor dog. If you stop, I will give you a gold coin.’

The old couple stopped beating the dog and took the gold coin from the boy. The dog was grateful to the boy for saving him, and he asked to join the boy on his journey. He promised that he would always be faithful and help whenever he could. Keloğlan could not imagine how a dog might help him, but he agreed that the dog could join them. The three friends continued on their journey home.

Not long after this, Keloğlan and his new companions stumbled upon two woodcutters in the forest. They were trying to kill a snake with a sharp axe. Keloğlan walked up to the angry woodcutters and said in a kind voice:
‘Please do not kill that snake. If you leave the snake in peace, I will give you a gold coin.’

The woodcutters thought about Keloğlan’s proposition for a moment and then agreed to put down the axe. The boy handed over his last gold coin without thinking. He was happy to have saved the snake from certain death.

The snake was grateful and slithered up to whisper in the boy’s ear.

‘Thank you for saving my life. I am the son of the Snake Emperor, and you must come home with me so that my father might thank you in person for your kindness.’

Even though Keloğlan had no more gold coins to buy food, he was happy to have saved his three friends and agreed to go and see the Snake Emperor before returning home to his mother.

When they arrived in the forest, the Snake Emperor was very grateful to Keloğlan for saving his son’s life.

‘I will give you anything that you ask of me,’ said the Snake Emperor to the boy.

It was then that the young snake whispered in the boy’s ear once more.

‘Ask my father for his magic seal, which he keeps under his tongue. With this seal, all of your wishes will come true. All you have to do is ask for something and it will be given to you.’

The Snake Emperor relinquished his magic seal. Keloğlan stuffed the seal into his pocket and returned home with his faithful cat and dog by his side.

When Keloğlan’s mother learned that her son had given away all of their gold coins she was angry. However, the boy promised that he would make up for this loss by marrying the Emperor’s daughter and making a new life for his mother.

‘And how will you do that, my son? This cat and this dog will not help you do such a thing.’

It was then that Keloğlan told his mother all about the magic seal that would grant his every wish.

The very next day, Keloğlan set off with his faithful cat and dog to the palace to ask for the hand of the Emperor’s daughter.

‘I cannot allow my daughter to marry such a poor boy,’ said the Emperor, when Keloğlan asked to marry the beautiful princess. ‘If you wish to marry my daughter, you must first build a palace next to mine so that I know she will be well looked after. But I know that you will not build such a palace with the help of a cat and a dog.’

That night, Keloğlan held the seal under his tongue and wished that he had a palace of his own. Suddenly there was a blinding light in the night sky. When the light faded, there, at the edge of the forest, stood a magnificent palace gleaming beneath the light of the moon! It was the most magnificent palace the boy had ever seen. And it was his!

When the Emperor saw that the young boy had built a beautiful palace, he agreed to the marriage at once. So it was that Keloğlan and the princess married that very same day.

The mother moved in with her son and daughter and lived like a queen in her new home. The cat and the dog were also happy in their new life.

The months passed and Keloğlan wished for nothing else as he was so happy with his new wife, whom he loved very much. He placed the magic seal in a room all of its own and never told the princess of its magical powers.

Then one day, when Keloğlan was out at the marketplace, a crafty old bead seller knocked on the door of the palace and enticed the beautiful princess to buy some of his beads.

‘They are wonderful beads, my princess, and you would do well to buy them from me.’

‘But I have no coins with which to buy them,’ the princess replied.

The crafty old bead seller said that he would be willing to trade his wares for something within the palace: ‘I hear that you have a dusty old seal which you keep in a room in the palace. Surely that is of no use to you. I will take the seal in exchange for all of my beads.’

Not knowing any better, the princess handed over the magic seal to the crafty old bead seller. He quickly disappeared, heading across the lake towards his home in the dark forest somewhere on the other side.
As soon as the seal had gone, the palace disappeared into thin air. The princess and the mother were left standing in the cold.

When the Emperor saw that the palace had disappeared, he reclaimed his daughter and promised that she would not be with her new husband if he could not look after her.

When Keloğlan returned home that day, he was upset to find his mother alone, his palace vanished and his beautiful wife returned to her father. He did not know how to find the magic seal and was sure that his new life was over forever.

The cat stepped up to the boy and said to him: ‘I can find the seal but I cannot swim across the lake.’

Then the dog stepped forward and said to the cat: ‘I can swim across the lake with you on my back. Together, we will find the magic seal.’

So the faithful cat and dog set off on their journey to recapture the magic seal from the crafty bead seller.

When they reached the river, the cat climbed up onto the dog’s back. The dog swam across to the opposite bank. Once they were across, the cat began sniffing at the air and followed the scent of the bead seller through the forest, with the dog close behind.

It did not take long to find the cottage where the bead seller lived, and they could see through the window that the old man was fast asleep in his chair before the fire.

‘I will catch us a mouse,’ said the cat, ‘while you find us some peppercorns and grind them up with your strong paws.’

When the mouse wiggled its tail, the peppercorn dust went straight up the old man’s nose and made him sneeze. It was then that the magic seal flew out into the air and the mouse caught it in his tiny paws!

The little mouse ran from the cottage and returned the magic seal to the cat and the dog who quickly made their way back through the forest towards the river.

Once again, the cat climbed up onto the dog’s back and the brave dog swam across the great river.

The faithful cat and dog returned the seal to their master and the palace reappeared in a blinding flash of light.

Keloğlan decided to throw a huge party to celebrate the return of his beautiful wife. The whole village was invited and so began a feast that lasted for forty days and forty nights.

The mother and the Emperor agreed that a cat and a dog could accomplish a great deal if they were faithful to their master.

Keloğlan smiled because he had learned that friends always help each other when they can, and there is magic in such friendship. Perhaps even more so than in the magic seal.