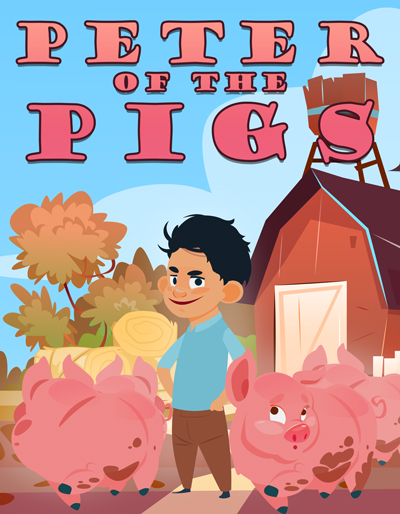 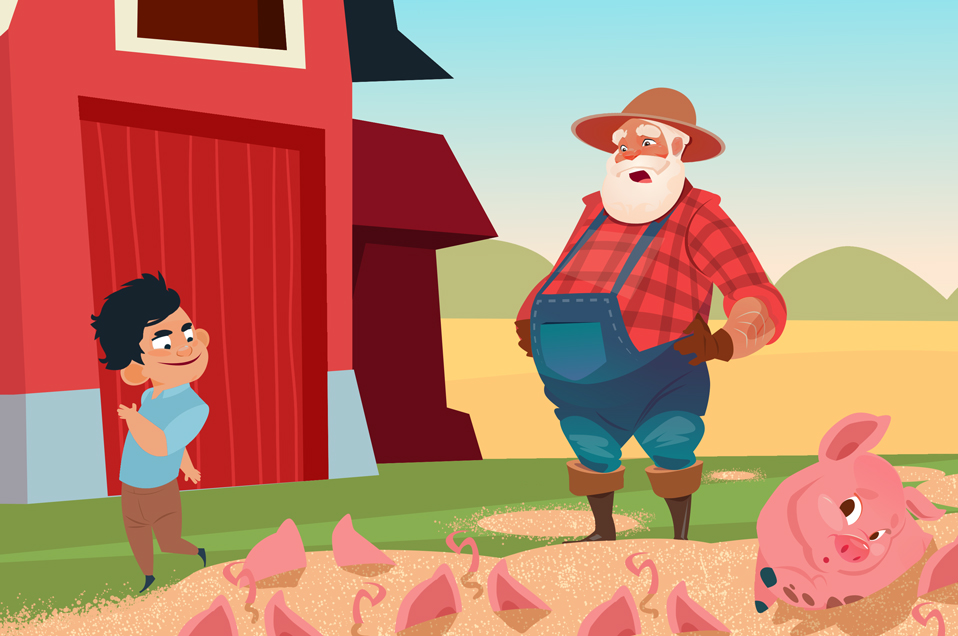 Long ago, there was a boy called Peter. It was his job to look after some pigs. The boy was called Peter of the Pigs by everyone in the countryside.

One day, a man approached Peter.

“Hey, Peter, will you sell all seven of those pigs to me?” he asked.

“I can only sell you six, and you must leave their ears and tails with me,” replied Peter.

So that’s what the man did.

Peter buried the remaining pig halfway in the sand. He placed the ears and tails of the other six pigs in the ground too. After that, he ran and told the farmer that all of his pigs were stuck in the sand.

Alarmed, the farmer followed Peter to the sandpit and found one pig halfway out of the sand. He rescued this pig and tried to pull the others out too. When he pulled, he only got ears and tails.

“They are completely under the sand! Peter, run back and ask my wife to give you both of my shovels. Let’s dig them out!”

So Peter ran back. When he got to the house, he asked the farmer’s wife to give him two bags of gold.

The lady was suspicious. “Are you sure you’ve to have two bags?”

She ran to her husband and asked, “Did you mean to ask for two?”

“Of course, give them to him, quickly!” shouted her husband.

So the farmer’s wife gave Peter the two bags of gold, and he ran off with them.

Unfortunately, not long after he had deceived the farmer’s wife, a thief stole Peter’s gold.

Peter was furious, and he chased after the thief.

The thief, however, had an idea. He took a deer’s kidney out of his pocket and threw it on the ground.

“I am much lighter now!” he called to Peter. “You will never be able to catch me unless you throw out your kidney like I have done.”

On hearing this, Peter used a knife to take out his kidney and, of course, he dropped dead at once.

The farmer discovered Peter’s body not far from his field.

“Oh poor Peter!” he said. “You were a sharp one, but you met one even sharper than yourself.”