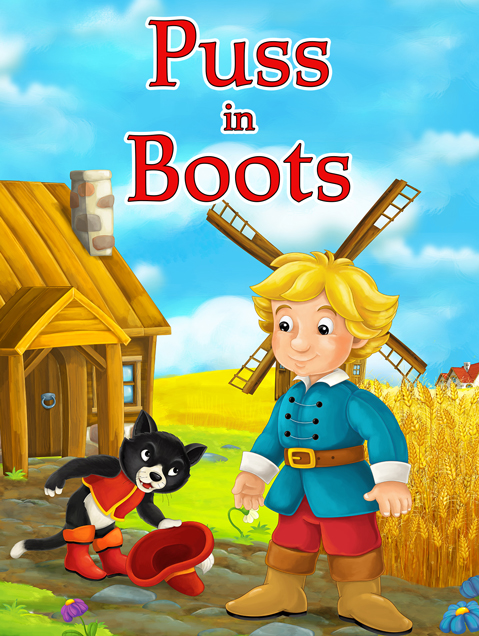 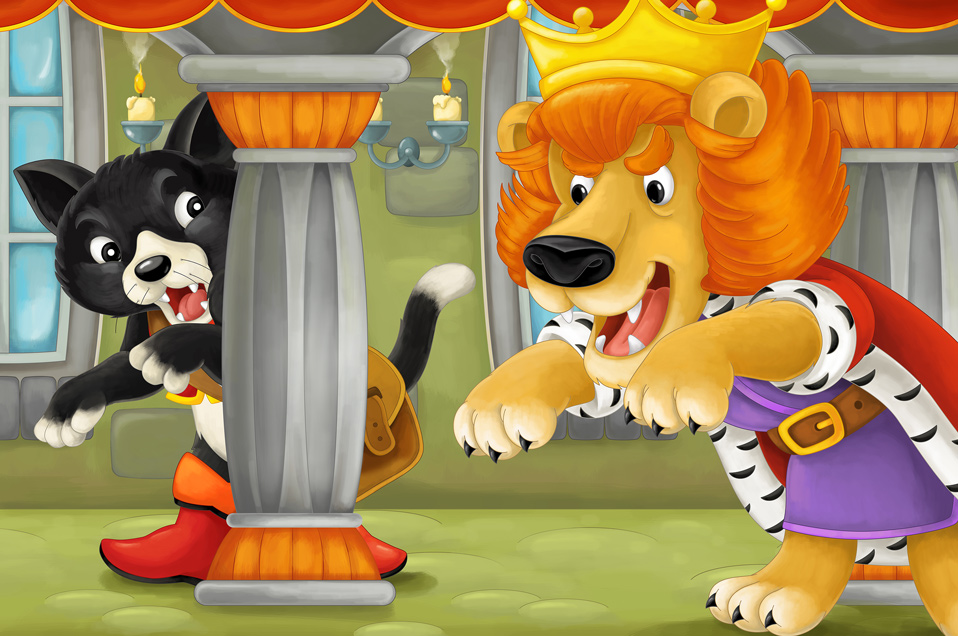 Once upon a time, there lived a miller who had three sons. When he died, he left the mill to his oldest son. He left the donkey to his middle son. His youngest son got the cat.

The youngest son was not happy. “My brothers can have a good life with what they have,” he said. “With just a cat, I shall be poor and die of hunger.”

When the cat heard this, he jumped up and said, “Do not worry, Master. I can make you rich. Give me a bag and some boots made just for me so that I can go running through the fields and forests.”

His master was not hopeful, but he thought it was amazing to have a talking cat. He bought him a big bag and some black boots. He named the cat ‘Puss in Boots’.

Puss in Boots went running through the fields and forests. He found a place where there were lots of rabbits. He filled his bag with carrots and lettuce. The greedy rabbits scampered into the bag to eat them. He caught the rabbits and took them to the palace.

Puss in Boots told the King that the rabbits were a present from his master, the Marquis of Carabas.

The King said, “Thank your master for this gift. I am pleased.”

Another time, Puss in Boots hid among some corn growing in a field. He held his bag open. When two partridges ran into it, he trapped them both. He gave the birds to the King as a present. The King was pleased and sent his thanks to the Marquis of Carabas.

For two months, Puss took presents to the King. He met the Princess, and she liked him very much. She always asked the servants to bring a bowl of cream for Puss. He lapped it up; it was the best cream he had ever tasted!

One day when Puss took a present to the castle, he learned that the King and the Princess were going for a drive along the riverside.

Puss in Boots ran home and told his master to go and swim in the river. While his master was swimming, Puss took away his clothes and hid them under a big rock. It was all part of his plan.

Puss heard the King’s carriage coming up the road. He saw the Princess sitting next to the King.

Puss ran up to the carriage and cried, “Help, help! My master is swimming, and someone has stolen his clothes.”

The King recognised Puss and stopped the carriage for him. He asked one of his servants to return to his castle and get one of his own suits for the boy to wear. When he was dressed in fine clothes, the miller’s son looked like a gentleman. The King offered to drive him back to his home.

Puss was happy to see his plan going well. He jumped up into the carriage and directed it to his master’s home. Then he ran on ahead until he met some people who were mowing a meadow.

“Please tell the King that the meadow you mow belongs to the Marquis of Carabas, or you shall be chopped into tiny bits,” he said.

Puss ran on ahead again and met some people who were reaping a field.

“Please tell the King that the field you reap belongs to the Marquis of Carabas, or you shall be chopped into tiny bits,” he said.

The people did as Puss said. The King was surprised to find that the Marquis of Carabas owned so much.

Now, not far away, there lived a mean old ogre. He owned all of the lands that Puss had claimed for his master. Everyone was afraid of the ogre. Puss in Boots ran to the ogre’s castle and asked to see him.

“Yes, I can!” roared the ogre. To show off, he changed himself into a lion and roared at the top of his lungs. Puss was scared and jumped out of the way. Then the ogre changed himself back again, and Puss told him how very clever he was.

“Are you clever enough to change yourself into a tiny mouse?” asked Puss in Boots.

“Of course!” said the ogre. In the twitch of a whisker, he changed again.

On seeing the mouse, Puss sprang on it and gobbled it up.

There was a clatter outside as the carriage arrived at the castle and drove across the drawbridge. Puss in Boots ran out to meet it.

“Your Majesty, welcome to the Marquis of Carabas’ castle!” he said. “Please come inside and join us for a feast.”

Puss in Boots soon set out a feast. The King was impressed by the beautiful castle. The Princess was charmed by the handsome Marquis of Carabas. They invited the boy to visit their palace.

In the end, the miller’s youngest son and the Princess fell in love and were married. Puss in Boots lived in the palace with them and was given the best cream in the land every day. He never had to worry about chasing mice again, except for fun.