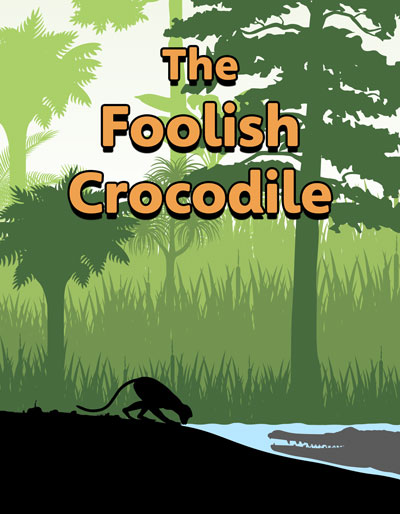 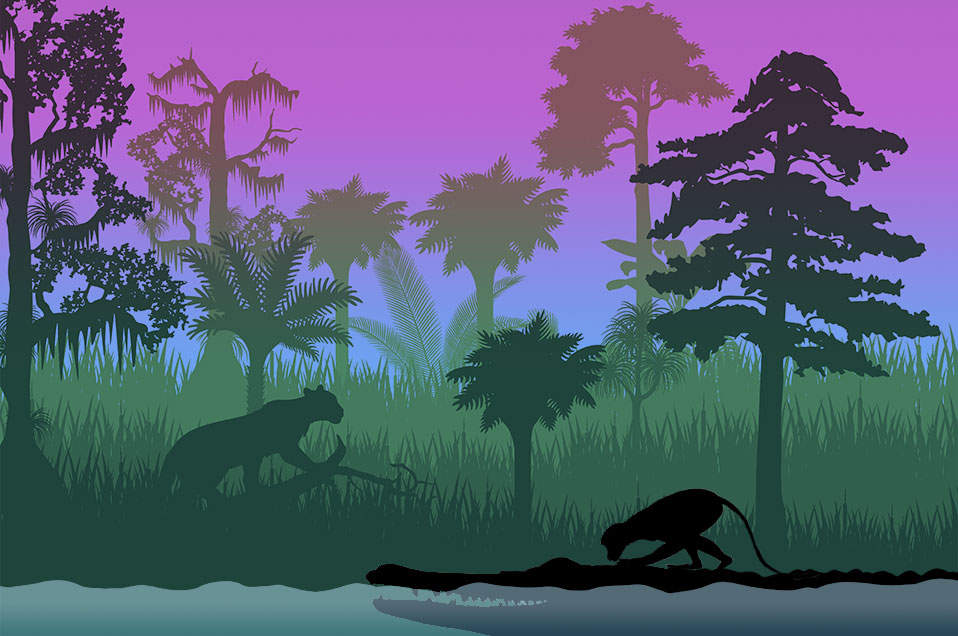 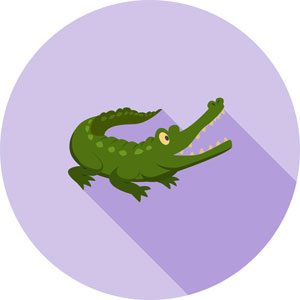 Once upon a time, there was a beautiful jamun tree that grew by the side of a river. A monkey lived in this tree; a happy and generous monkey who loved to eat the sweet jamun fruit that grew in abundance on the branches of the tree.

One day, a hungry crocodile approached the monkey and asked, ‘May I try some of the fruit from your tree?’

The crocodile returned to the tree each day for many weeks and soon the two animals became very good friends.

One day, the crocodile asked the monkey, ‘Might I have some of the fruit from your tree to take home to my wife?’

Because they were such good friends the monkey agreed to give the crocodile some fruit to take home. The crocodile thanked the monkey and took the sweet fruit home to his wife. But the wife was not a nice crocodile, she was a witch crocodile and she was forever scheming and plotting against the other animals of the forest.

‘Where did you get this lovely fruit?’ the wife asked her husband.

‘I have a dear friend,’ replied the crocodile, ‘a monkey who lives in the jamun tree on the other side of the river. He gives me the fruit each day.’

The wife – being a witch, and an evil witch at that – thought for a moment and then said to her husband, ‘If the monkey lives in the jamun tree and eats the sweet fruit all day long, then imagine how sweet his heart must taste! I want this monkey’s heart to eat and you will get it for me.’

‘I cannot imagine such a terrible thing!’ replied the husband crocodile. ‘The monkey is my friend and I do not want you to eat his heart!’

The cunning wife thought again and then replied, ‘I do not believe that you are getting this lovely fruit from a monkey. I think that you are seeing another crocodile behind my back, a pretty crocodile. You are cheating on me, I know it!’

The husband protested his innocence and grew very sad at his wife’s accusations. He decided that it was best to stay away from the monkey and the jamun tree in the hopes that his life would return to normal and his wife would forget all about her evil plan.

But the weeks passed slowly and the crocodile’s wife continued to accuse him of cheating on her even though she knew this not to be the truth.

‘I know that if there really was a monkey who lived in the jamun tree then you would help me catch him and eat his heart,’ she would say to her husband. ‘That is what you would do if you loved me.’

Eventually the poor crocodile was convinced to go and see the monkey and try to catch him so that his wife might eat his heart.

When he arrived at the tree the following evening he felt very guilty. The monkey looked down and asked, ‘Where have you been all these weeks, dear friend? I have missed you very much.’

The crocodile replied as his wife had instructed. ‘I have been arguing with my poor wife. She very much wants you to come to dinner so that she can thank you for the jamun fruit, but we live on the other side of the river. You cannot swim. If you try to cross the river, then you will surely drown and I certainly do not want that.’

‘But you can carry me on your back across the river,’ said the monkey. ‘That way I will be able to come to dinner and finally meet you wife.’

The crocodile agreed but he was very sad that he was tricking his friend. The monkey, not knowing his fate, jumped down from the jamun tree and climbed onto the crocodile’s back. Then the two friends slipped into the water and began to cross the river towards the crocodile’s home.

As he was swimming across the river, the crocodile realised that he was unable to trick the monkey.

‘I am not telling you the truth,’ said the crocodile. ‘My wife is an evil witch and she wants to eat your heart. I am very, very sorry.’

The monkey grew scared, but he was a clever monkey and so he replied very calmly, ‘Oh, why did you not tell me that before, dear friend? I have left my heart in the jamun tree. We must swim back and I will get my heart for your wife.’

The crocodile was quite surprised that the monkey was so willing to give up his heart, but he quickly turned around and swam back towards the riverbank.

As soon as they reached the jamun tree, the monkey jumped from the crocodile’s back and clambered up the tree as fast as he could until he reached the highest branch. When he was sure that he was safe, he looked down at the crocodile.

‘You are a silly crocodile. My heart is beating in my chest where it has always been beating and your evil wife will never have a chance to eat it! And we will never speak again because you betrayed me! Now go away!’

The crocodile had a great deal of time to reflect upon his actions as he swam home to his wife. He felt guilty and sad for betraying his friend and he regretted his actions very much.

As soon as he arrived home his wife asked, ‘Where is the monkey?’

‘I am afraid that the monkey tricked me and now he will never come down from his tree,’ replied the crocodile.

But the wife was not convinced by her husband’s story and she kicked him out of their home and told him never to return for as long as he lived.

The crocodile turned his back on his wife and began to swim down river, away from everything he had ever known. He was sad and lonely and he did not know where he was going, but he also knew that he had sealed his own fate the moment he betrayed his good friend the monkey.

‘This is what I deserve,’ thought the sad crocodile as he swam down river into a dark and gloomy night.