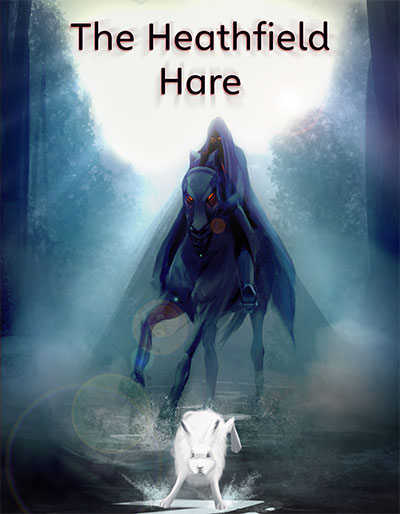 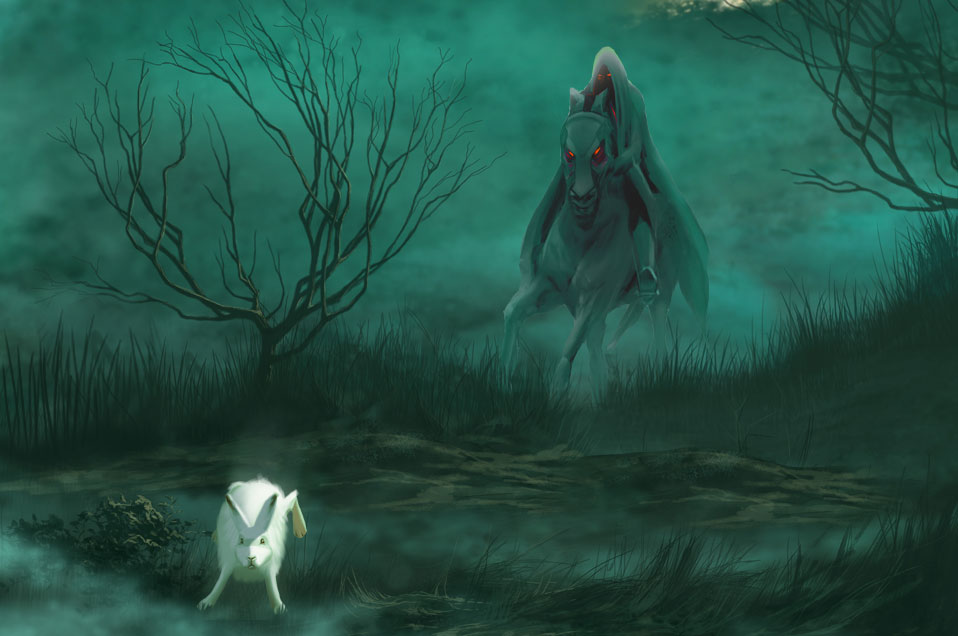 Once, there was a farmer’s wife. And one night she woke up and dreamt that it was day. And she took her basket on her arm and walked away from the farm, high, high, high onto the moor.

And there the moon shone full and round. And silhouetted against the moon she saw a creature running towards her – long-eared, fast: a hare. And quickly it ran. And behind the hare there came a black hound. And behind the hound, a horse with a rider tall in the saddle and a black hat upon his head. And the hunter came closer.

And she saw as he came closer that there were horns, one on each side of his head.

And she saw as he came closer that the rider had no boots upon his feet; instead, cloven hooves.

And now the hare leapt over the hedgerow in front of her. And the woman seized the hare and put it inside her basket and closed the lid.

And now the hound, baying, leapt over the hedgerow, and the horse behind it. And the rider pulled up and looked down at her: ‘Old woman. I have been giving chase to a hare upon these moors. Tell me which way did it go?’

And the woman looked up at the rider, and his eyes blazed and she knew this was the devil. And without hesitation she pointed away along the lane.

And the rider looked down at her, raised his hat from his head and leant down close so she could smell his foul breath...

And the devil rose up once more in his saddle and placed the hat back on his head, ‘I thank you,’ and rode away along the lane with the hound baying in front.

And when they had gone, the woman lifted the lid of the basket and from it came no hare but a beautiful spirit shimmering in the moonlight.

‘I thank you kind woman, you are gentle and brave
As a hare I was hunted but now I am saved
For the devil that chased me is now gone ahead
I may pass as a spirit to the world of the dead.’

And the spirit disappeared, vanishing into the night.

The old woman walked with her basket down to the farm. And for it was still night, she went back to bed. And when she woke up in the morning she told the farmer all that had happened.

‘Nonsense, wife. It cannot be.’

But when she went down to fetch the eggs from under the hens, she found twice as many eggs as she had ever found before. And when she cracked one, its yolk was golden.

And when she went to milk the cows, they yielded double the milk they had ever yielded before, and the milk was rich and creamy.

And she took that milk and those eggs to market and sold them for good profit and her husband was best pleased.

The next day: more eggs and more milk. And the day after.

For the weeks and months and years of the rest of their lives, that farmer and his wife lived in plenty.

And all, they say on Dartmoor, because she saved that spirit from the devil.