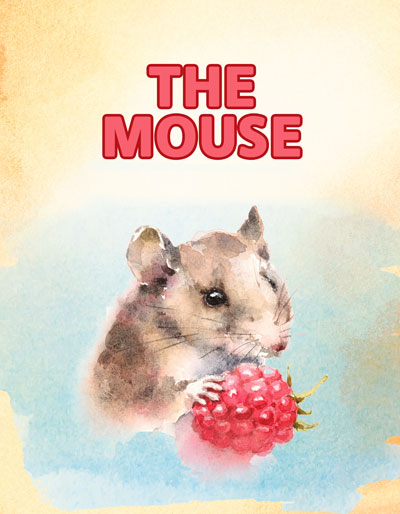 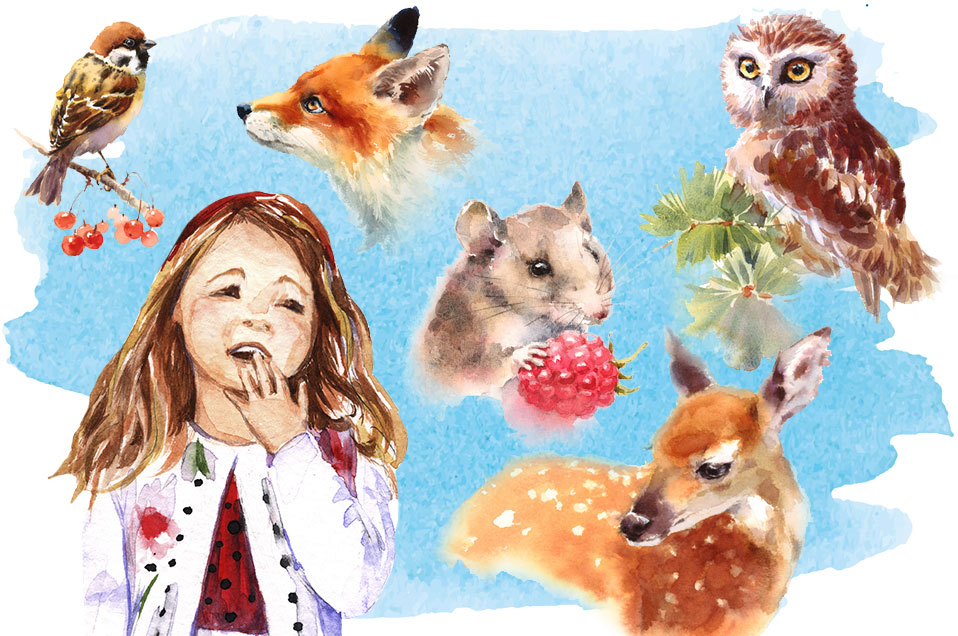 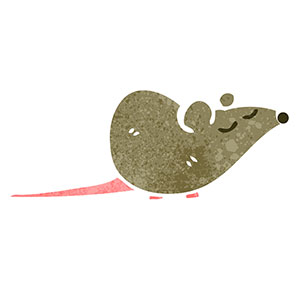 This is the story of a little girl who was not scared of anything … well, at least until she grew a bit older.

The little girl lived with her mother and father and her older brother whom she loved very much. The family lived in a pretty town; not too small and not too big. Not too posh and yet quite chic. This little town was situated in the North‐West of Poland.

Most towns are much too inviting to be inhabited only by humans. And this town was no exception. In fact, almost anywhere you go, if you are very quiet and look very closely, you will soon see numerous creatures with which we share our towns and cities.

All about you are foxes, squirrels, mice, rats, blackbirds, pigeons, sparrows, and sometimes even tortoises and parrots who have escaped from their homes to roam the streets and rooftops.

The little girl and her brother loved all animals – those they could see in the little town, and those that lived very far away in jungles and deserts across the globe.

The children found it fascinating to learn about animals and they would often play games, testing each other to see who knew the most animal facts. The brother often won these games but the little girl, eager to be as clever as her older brother, was definitely catching up.

‘How quickly can the hare run?’ The brother would ask.

‘I’ll tell you how quickly a hare can run, if you can tell me what is the most poisonous snake on the whole planet?’ The little girl would reply.

Although the little girl looked up to her older brother, it was perhaps not such a good idea to idolise him so. Even though the brother loved almost all animals, he had always been scared of mice. Because of this, the little girl noticed that she too was scared of mice without ever really knowing why. She did not understand it at the time, but it is quite possible to learn how to be scared of things by watching others.

One year, when summer arrived in the little town, the brother was finally old enough to be allowed to go camping with his friends. And so the little girl was sent to visit her grandma and her grandpa who lived in the countryside.

The little girl loved walking across the fields with her grandma and naming all of the different plants. She also loved swimming in the lake with her grandpa while trying to catch the small fish in her hands. But what she liked the most was going on long walks in the forest with both of them.

During these walks they looked for the first tiny mushrooms that would sprout from the earth after the rains. The little girl also picked raspberries and rose berries so her grandma could make jams for the winter.

When they returned home, the little girl would thread slices of cut mushrooms on a thin piece of string, turning them into splendid garlands which she would then hang around her neck.

While Grandpa prepared fish for dinner, the little girl and her grandma would laugh and play. They imagined how funny it would be to decorate a Christmas tree with row upon row of mushroom garlands.

Occasionally, as they walked through the forest, the grandparents and the little girl would catch sight of a deer, or even an owl, sleepy after a long night of hunting. This did not happen very often because you have to be very quiet to spot such creatures and the little girl spent much of her time singing with her grandma, or swapping stories in a secret language which they had learned over the years.

It is very difficult to be so quiet when you are having so much fun with your grandma!

Now you might better be able to imagine what a surprise the grandma got when the little girl screamed out in fear from the kitchen one day.

The old woman hurried after the little girl, thinking that there must have been an accident. But when she got to the kitchen, the little girl was not injured at all. Instead, she was standing on top of the dining table looking quite scared and pointing towards a broom in the corner.

‘What is it?’ Asked the grandma.

‘I saw a mouse!’ Cried the little girl.

The grandma chuckled and asked: ‘Does the mouse have big teeth and flaming red eyes and huge, razor-sharp claws with which to attack you?’

The grandma continued chuckling to herself and soon the little girl could not help joining in. As the old lady helped her granddaughter down from the table, she asked: ‘What happened to my fearless little girl who loves all animals and is curious about everything? That little girl would never be scared of a mouse.’

The little girl thought about the question for a while and then replied: ‘Each time my brother sees a mouse or a rat he is really scared. If he is scared of mice, then they must be really horrible because he is very brave. Because he is scared, I am scared.’

‘But are you actually scared,’ asked the grandma, ‘or is it just that you have gotten used to acting scared when you see a mouse? After all,’ she continued, ‘a mouse is no bigger than your hand.’

The little girl thought some more, then she said: ‘Not actually scared, I suppose. I don't really know.’

The grandma took a seat at the table and the little girl climbed up onto her lap.

‘A lot of people are scared of silly little things without having a reason for it,’ said the old woman.

‘I don't want you to be one of those people. These quirky habits of being scared can become a real nuisance when you get older. If you are not careful, you will be scared of getting wine from your own cellar just because there might be a little mouse down there. Or you might become scared of your own garden just because a few rats may have crossed it during the night. Or you might even become scared of a person because they look different from you or come from another country. It makes no sense to be scared of such things without a very good reason.

‘Also,’ the grandma continued in her soft voice, ‘don’t you think it's funny that you are not scared of the forest or the lake, but you are scared of a little mouse?’

‘I know,’ said the little girl with just a touch of hesitation in her voice, ‘but I just can't help it. Each time I see a mouse I want to scream. I don't like the way they look or the way they move.’

The grandma smiled and said: ‘Oh, that's not very nice. It’s not their fault that they move in such a way. And they cannot change the way they look, can they?

‘I know that once you have your mind set against something it is difficult to change it, but you might try to focus on what it is that you like about mice, and what it is you admire about them. If you do that then the scary things will become smaller and smaller and soon will disappear altogether.’

The little girl was not completely convinced, so she asked: ‘Grandma, please tell me why you like mice so much? What is that you see in them?’

The grandma reached across the table for her teapot and poured herself a cup of tea. ‘Well now,’ she said, ‘I think I have just the story for you.

'Remember I told you that when I was just a little older than you are now, there was a war in our country?’

The little girl nodded but remained silent so as best to concentrate on the story.

The grandma continued: ‘It was very dangerous for children to play out on the streets back then because the soldiers of the occupying army could be extremely short-tempered and would hit us children if we irritated them or made too much noise. There was never enough food to share between me and my parents and my siblings, and times were very hard.

‘Watching mice was fun and helped me to forget about my troubles. And it turned out that mice were excellent teachers. They showed me how to walk quietly and remain unnoticed. Thanks to that little trick, I was able to visit my friends who lived across the street and gossip with them about boys.’

The little girl looked up and noticed a cheeky smile appear on her grandma’s lips. When she saw the little girl looking up at her, the grandma reached for her tea and took a sip and pretended that she was not smiling at all.

‘Something else they taught me to do,’ said the grandma, ‘was to respond quickly to any changes. You see how rapidly a mouse can react to any movement and hide in its hole or disappear in the tall grass? By watching mice, I learned how to quickly hide from soldiers and avoid problems. They also showed me how to outwit the soldiers and sneak under their noses to get more food.

‘If we followed the mice we would always find some extra grains from which we could bake bread. Who knows,’ beamed the old lady, ‘maybe it is thanks to mice that I survived the war!’

The little girl was mesmerised, all the time trying to imagine her grandma as a young girl gossiping about boys, or sneaking about under the noses of the soldiers to find food. And all this she had learned from watching mice!

‘Perhaps,’ pondered the little girl, ‘mice are not truly so bad after all.’

Just then, as if sensing the little girl’s change of heart, the mouse that had scared her only moments before popped its head out from behind the broom in the corner of the kitchen.

The little girl watched it sniffing the air, its whiskers twitching all the time, its little tail curled up behind it like a question mark.

‘There must be some truth in my grandma’s way of dealing with scary things,’ thought the little girl. ‘After all, my grandma isn’t scared of anything!’

Suddenly the mouse scampered across the floor and disappeared through the kitchen door and out into the garden. As she watched the mouse disappear, the little girl promised herself that she would think about mice more kindly. And when she got home she would share the story with her brother so that he too would see that mice were really very clever creatures and not scary at all once you got to know them.