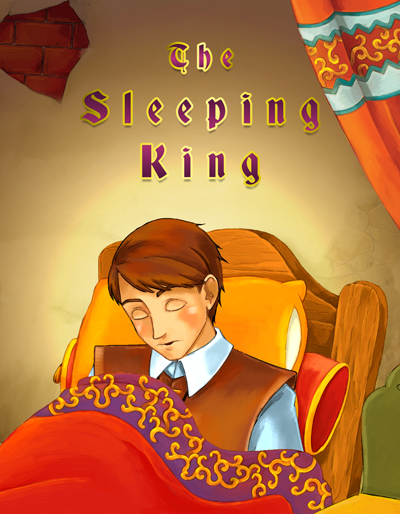 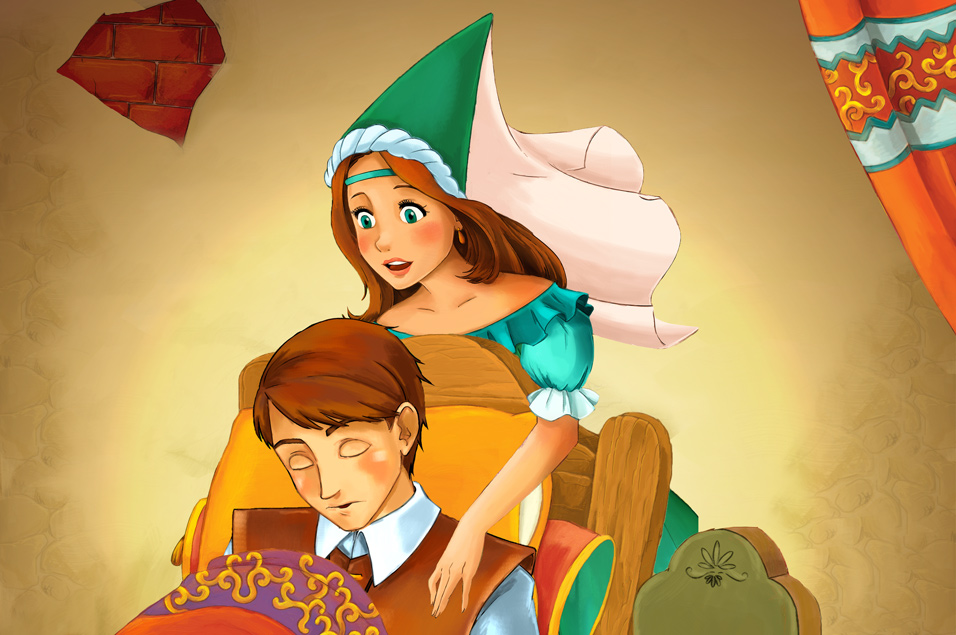 Once upon a time, there was a beautiful princess who was bored with life at court.

As she was the king’s daughter, she couldn’t go and play with other children her age. She would watch them from the balcony outside her room.

As she played by herself on the balcony, she would dream of going on thousands of adventures beyond the castle walls.

One day, when she had grown up, the princess heard a song that the children were singing on the street outside the castle gardens.

‘The king will sleep and will not wake until the early morning of San Juan.’

This song surprised the princess so much that she called over to one of the little girls.

‘What are you singing?’ the princess asked.

‘It’s a story our mother tells us before we go to sleep,’ the little girl replied.

‘Please tell it to me,’ said the princess.

The little girl told her the story:

‘My mother says that there’s a king in a castle far away from here. He has been placed under a spell and spends the whole year sleeping. He only wakes up in the early morning of San Juan’s day. If no one waits beside his bed, he goes back to sleep until the next year. He will remain under the spell until he meets a princess and marries her.’

The princess was fascinated by this story. She asked how far away the mysterious castle was.

The little girl replied, ‘I don’t know, but my mother says that to get there, you have to wear out a pair of iron shoes.’

So the princess ordered that a pair of iron shoes would be made for her. She insisted that they be beautiful yet tough.

When she received the shoes, she put them on and walked to a magical forest that no man had ever dared to enter.

A kind old woman appeared in a clearing and asked where she was going.

The princess replied, ‘I’m looking for the palace of the sleeping king who won’t wake up until the early morning of San Juan. Do you know where it is?’

The old woman didn’t know anything about that place, but she suggested that her child, the sun, could help.

‘But be careful. I worry you may come to harm when you see him. He’s very grumpy,’ the old woman warned.

In spite of the warning, the princess insisted on going home with the old woman.

Despite her bravery, when she heard the sun approach the house, the princess was frightened and she hid in a wardrobe.

The sun cried out, ‘I smell a human and I want some!’

‘Quiet!’ said his mother. ‘There is a poor young girl here. She is looking for the castle that belongs to the sleeping king who will not wake until the early morning of San Juan. I thought you might know how to help her.’

‘I’ve never heard anyone speak of the castle or the king. Although I think my sisters, the stars, would probably know about it,’ the sun replied.

Exhausted from her journey, the princess went straight to sleep without any dinner. She stretched out and slept on top of a table. Her hunger woke her the next morning.

The old woman prepared a delicious breakfast that the young princess devoured as the stars arrived one by one.

The stars were incredibly tired from their night of work. The princess asked every one of them about the story, but not one of them had heard of the sleeping king.

The stars suggested that the wind might know better. He was always going from place to place.

After breakfast, the princess went on her way again.

She soon met another old woman, who asked where she was going with those strange iron shoes on her feet.

‘I’m looking for the castle of the sleeping king who won’t wake until the early morning of San Juan,’ the princess said.

This old woman had no idea where the castle was either.

‘Maybe my son, the wind, can tell us where it is. But I worry that you may come to harm when you see him,’ the old woman warned.

In spite of the warning, the princess insisted on going home with the old woman.

Despite her bravery, the princess hid in a wardrobe when she heard the wind coming.

‘I smell a human and I want some!’ cried the wind.

‘Quiet!’ said his mother. ‘There is a poor young girl here. She is looking for the castle that belongs to the sleeping king who will not wake until the early morning of San Juan. I thought you might know how to help her.’

‘If she exits through the door on the other side of our house, she will arrive there,’ said the wind.

The princess went out the side door as the wind had said. After walking for a bit, she discovered that she was barefoot. The iron shoes had disintegrated.

Amazed, she looked up and saw a magnificent fortress and its entrance lay open.

She ran through all the rooms of the castle until she found the king. He was asleep in a luxurious bed. He looked kind, and he was in a very deep sleep.

Living the story was more wonderful than she had imagined. She sighed and settled herself by the headboard of his bed.

Days, months and seasons passed. The princess came to know everyone who lived in the fortress. They waited for the sleeping king to wake up but nothing happened.

Even though the princess was beginning to lose hope, she remained by the king’s bed.

One day, the princess heard sweet music. She had forgotten what day it was, but the town was celebrating San Juan’s day.

‘Let’s go on the balcony and listen to the music,’ said a servant girl.

The princess hesitated because she didn’t want the king to wake while she wasn’t by his side. However, she decided to go and listen to the first music she had heard in months.

Grateful for their care, the king promised a gift to both women. The princess asked for a rock and a branch of bitters. This strange request surprised the king, and so he followed the princess back to her room to see what she did with the objects.

He silently observed her through the doorway. The princess asked the rock to make sure the king did not forget her.

Then she clutched the bitters and was about to climb down through the window when the king stopped her.

‘Stop!’ he cried, ‘I know it was you who waited by my bed for such a long time and lifted the spell!’

When they looked at each other again, they fell in love. The two were married and lived happily ever after.