What We Plant, We Will Eat Unknown 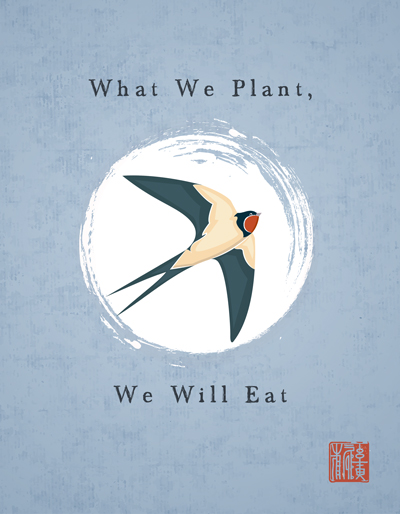 What We Plant, We Will Eat 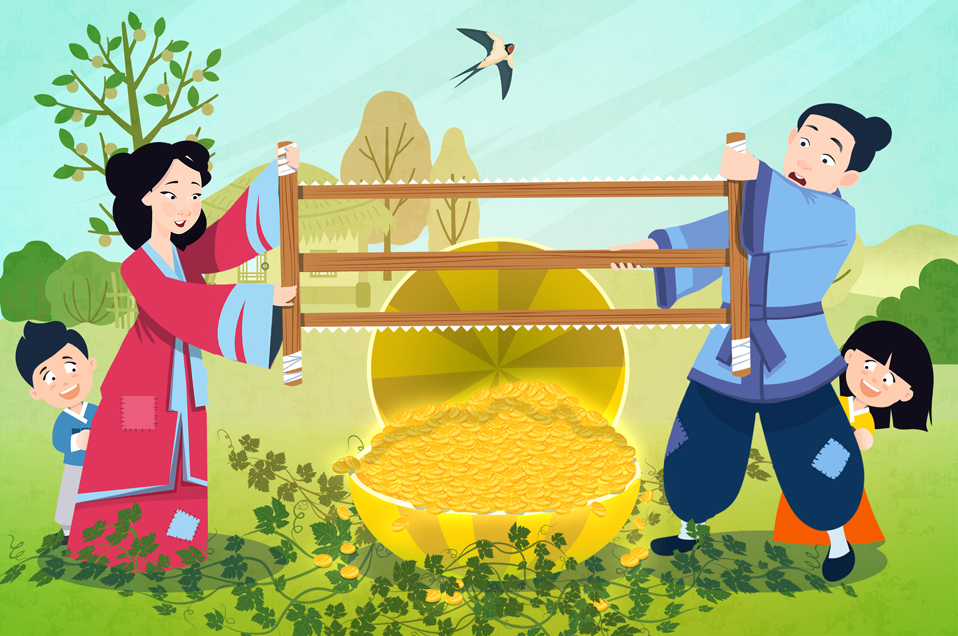 What We Plant, We Will Eat

A long time ago, two brothers lived with their father in a small house in Korea.

Every night after supper, the father would say:

‘Remember boys that what you plant you will eat.’

The younger son listened politely to his father, but the elder son would yawn and walk away. The father watched him go with sadness.

On his deathbed, the father beckoned the two brothers close to him.

‘Remember, my sons, that nothing is as important as family. Share this property and work together. I leave this land to both of you.’

The older brother was angry. The law said that the eldest son inherited everything. So, as soon as his father’s funeral was over, he threw his younger brother out of their home, ignoring his father’s last wish.

Heartbroken, the younger brother walked for many miles until he found some land that nobody wanted. He planted a small crop of rice and built a mud cottage with a roof made from the dirty straw that dropped from passing farm carts. By saving and scraping by, he managed to make enough money to marry and have a family.

One year, the rains didn’t come and the younger son’s rice crop died. It broke his heart to hear his wife and children moaning with hunger, so he went to his wealthy brother to ask him to share some of the rice raised on the property which their father had willed to them both.

‘It’s my rice crop now,’ the elder brother said and he slammed the front door in his younger brother’s face.

As the younger brother left the village, he heard a noise from a tree above him. A snake was attacking a baby swallow. The tiny bird tried to escape, but it was too young to fly and fell to the ground instead. The younger brother picked the bird up and held it gently in his hands. When the snake slid away, he returned the baby to its nest and went home to his starving family.

As the family watched, the seed started to grow into a vine which grew and grew. Within minutes, juicy melons were growing on the vine and soon they were ripe and ready to pick.

‘Father, may we eat a magic melon?’ cried the hungry children.

The younger brother pulled a melon off the vine and cut it open. Instead of fruit, the melon was filled with gold coins that fell at his feet. Every melon was full of gold.

The younger brother and his family were now rich beyond their wildest dreams. They had plenty to eat, they bought a large house with lots of land and grew many crops.

When the older brother heard what had happened, he was very jealous and started searching for a magic bird as he too wanted more money and more land. When at last he stumbled upon a little bird with a broken leg, he picked it up, saying:

‘I will help you, little bird if you will help me.’

However, the little bird could see that the older brother was cruel and greedy. When its leg healed, it flew to the elder brother’s house, circled his head three times and dropped a seed into the moist soil.

Expecting the same good luck as his younger brother, the elder brother watched the melons grow larger and larger and then picked the most enormous melon and cut it open. Instead of gold coins, a hundred warriors jumped out of the melon. They stole all his money and hit him with sticks.

Unable to believe that all the melons were bad, the elder brother crawled over to the second melon, expecting to find enough gold to make up for the beating he’d received from the warriors. However, this melon was full of hissing snakes that slithered straight into his house.

He cut open a third melon and had to dodge out of the way as an army of rats rushed out.

By this time, the magical melons were bursting open on their own, releasing spiders, ants, termites, bees, and many other creatures which invaded his house and farm, destroying everything.

Expecting his brother to turn him away, he began to walk off.

However, his brother looked at him kindly and said:

‘Let us do what our father asked and sow a new crop together. For what we plant, we will eat.’

The elder brother looked up with tears in his eyes and accepted the hoe from his younger brother’s hand.

From that day on, they worked hard together and shared everything.