Who is the Cleverest, Sheep or Lion? Sabrin Hassan 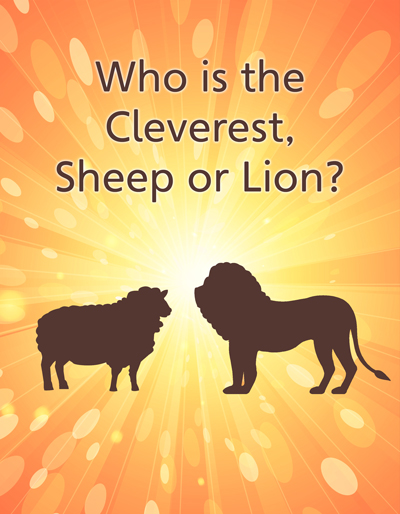 Who is the Cleverest, Sheep or Lion? 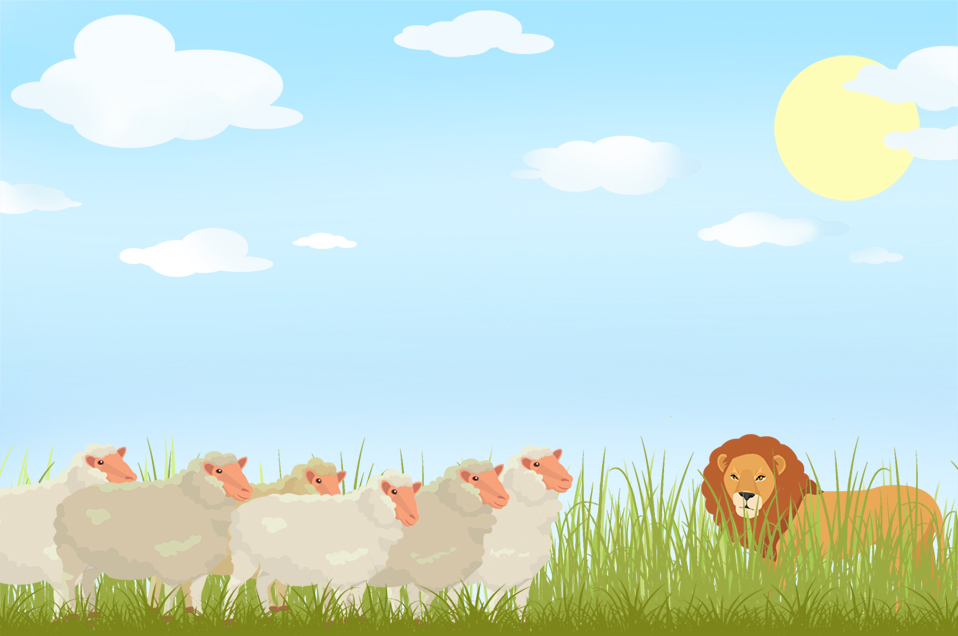 Who is the Cleverest, Sheep or Lion?

A very long time ago, there was a crafty lion and a clever sheep. One day, the clever sheep was eating some grass in a clearing with his friend when the crafty lion came creeping across the fields towards them. When the lion came out of the tall grass the sheep prepared to run because they were scared of his sharp claws and his big teeth. ‘You don’t need to run away,’ said the lion in a friendly voice. ‘I am simply here to tell you about a lovely fresh water lake just beyond these fields. Why don’t you come with me and have a drink.’

And so the lion lured the sheep into the tall grass with the promise of fresh water. The lion looked all about to make sure that no other animals were around to help the sheep, and when he was sure they were alone he pounced on the unsuspecting animal, and ate him for his dinner.

Later that day, when his friend did not return to the herd, the clever sheep was sure that the crafty lion had eaten him. ‘That is ten sheep this month,’ he thought to himself. ‘I must do something to stop the crafty lion before I lose all of my friends!’

And so the clever sheep warned the rest of the herd about the crafty lion and his tricks. But the silly sheep did not listen, and as the weeks and months passed, the crafty lion lured more and more sheep into the tall grass with the promise of fresh water. And it was there that they met their grizzly end.

One day, the clever sheep decided that it was down to him to do something about the crafty lion and his wicked ways.

The clever sheep waited until nightfall and then crept out into the clearing next to the long grass. When he was sure that he was alone, he began to dig a very deep hole in the ground. When this was done, he built a huge fire at the bottom of the hole then covered the hole over with reeds and grass so that the smoke would be hidden from view.

The clever sheep waited patiently until dawn, and just as the sun was rising over the fields he heard a familiar voice coming from the tall grass.

‘Why don’t you come with me, little sheep. I know of a fresh water lake just beyond the fields where you can enjoy a cool drink of water.’

The clever sheep did not move from his spot. Instead, the sheep said, ‘why don’t you come out of the tall grass and I will show you where you can find lots of sheep to eat.’

The lion was indeed very crafty, but he was also very greedy and could not resist the temptation of such a huge dinner.

‘Come with me,’ said the sheep once more, ‘and I will show you where the herd lives.’

And sure enough, the lion stepped out from the tall grass into the clearing. But as soon as he stepped from the grass, he fell down into the deep hole and burned in the roaring fire set by the clever sheep.

‘That is the end of you and your wicked ways,’ thought the clever sheep to himself. ‘Now us sheep will be safe, for a while at least.’

When the clever sheep returned home he told the rest of the herd about his victory over the lion. They all cheered and congratulated their friend, and they all asked how he was able to kill the crafty lion when the beast was so big and strong yet he was so small and fragile.

‘It was simple,’ replied the clever sheep, ‘all I did was watch and learn from the mistakes of others.’

The clever sheep then went on to explain how he had watched the crafty lion lure his friends into the fields, and he also explained that this was how he had learned of the lion’s greedy nature.

The rest of the herd listened closely to the clever sheep and so they too learned never to trust the lions again, and they also learned how important is was to listen to good advice given by a friend.