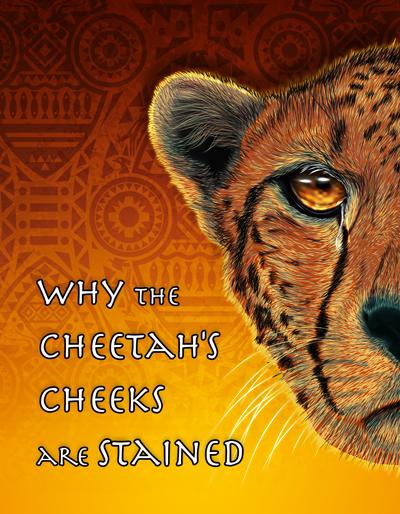 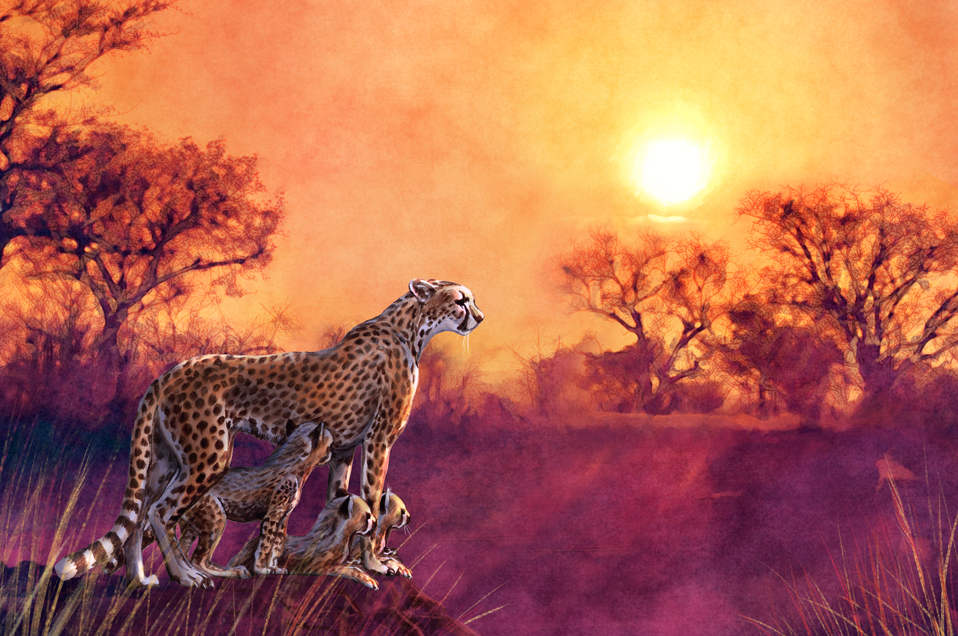 Long ago, a wicked and lazy hunter was sitting under a tree. He was thinking that it was too hot to be bothered with the arduous task of stalking prey through the bushes. Below him, in the clearing on the grassy veld, there were heavy springbok grazing.

However, this hunter couldn't be bothered. He was so lazy! He gazed at the herd, wishing that he could have the meat without doing the work. Suddenly, he noticed a movement off to the left of the herd. It was a female cheetah looking for food.

Keeping downwind of the herd, she moved closer and closer to them. She singled out a springbok who had foolishly wandered away from the rest. Suddenly, she gathered her long legs under her and sprang forward. With great speed, she came upon the springbok and brought it down. Startled, the rest of the herd raced away as the cheetah killed her prey.

The hunter watched as the cheetah dragged her prize into the shade on the edge of the clearing. Three beautiful cheetah cubs were waiting for her. The lazy hunter was filled with envy for the cubs and wished that he could have such a good hunter provide for him. Imagine dining on delicious meat every day without having to do the actual hunting!

Then he had a wicked idea. He decided that he would steal one of the cheetah cubs and train it to hunt for him. He would wait until the mother cheetah went to the waterhole late in the afternoon to make his move. He smiled to himself.

When the sun began to set, the cheetah left her cubs concealed in a bush and set off to the waterhole. Quickly the hunter grabbed his spear and trotted down to the bushes where the cubs were hidden. There he found the three cubs. They were still too young to be frightened of him or to run away.

He first chose one, then decided upon another and then he changed his mind again. Finally, he stole them all. He thought to himself that three cheetahs would undoubtedly be better than one.

When the mother returned half an hour later and found that her cubs were gone, she was broken-hearted. The poor mother cheetah cried and cried until her tears made dark stains down her cheeks. She wept all night and into the next day. She cried so loudly that she was heard by an old man who came to see what the noise was all about.

Now this old man was wise and he knew the ways of the animals. When he discovered what the wicked hunter had done, he became angry. The lazy hunter was not only a thief; he had broken the traditions of the tribe. Everyone knew that a hunter must use only his strength and skill. Any other method of hunting was a dishonour.

The old man returned to the village and told the elders what had happened. The villagers became angry. They found the lazy hunter and drove him away from the village. The old man took the three cheetah cubs back to their grateful mother.

However, the mother cheetah's weeping had stained her face forever. Today, the cheetah wears the tearstains on its face as a reminder to hunters that it is not honourable to hunt except in the tradition of the tribe.