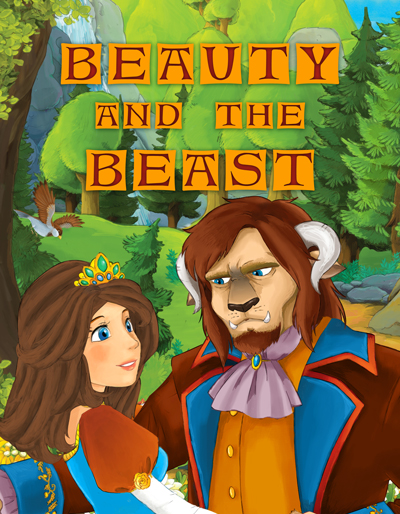 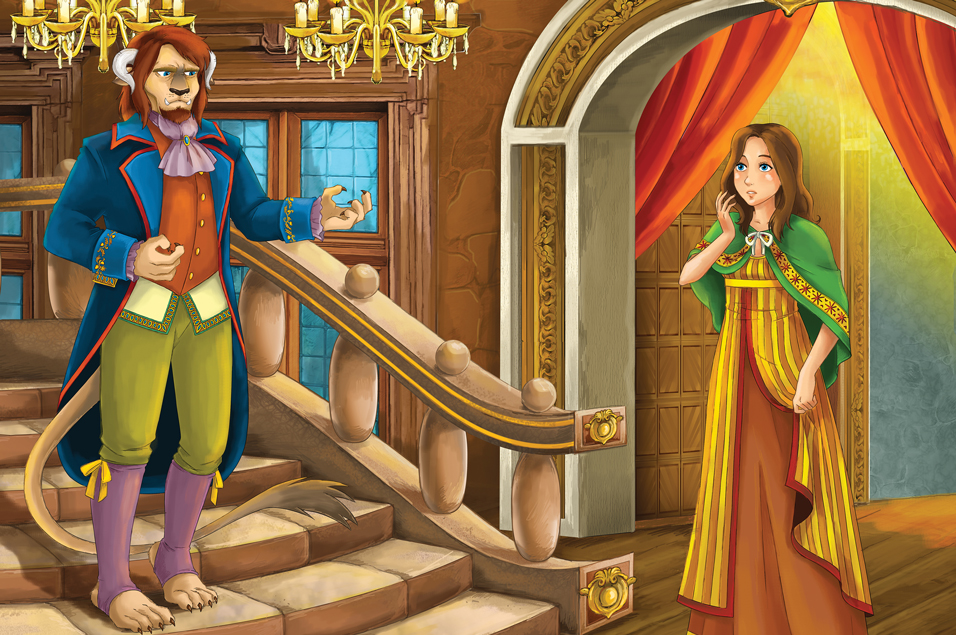 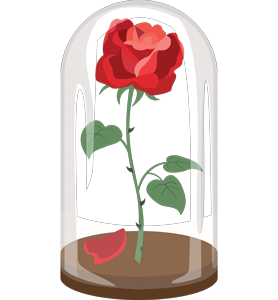 Once upon a time, there was a struggling trader. He lived with his daughter, Beauty, in a small village in France. He left their home for a business trip, leaving Beauty behind. Coming back, he had to pass through a dark forest. As he was tired, he looked for a place to sleep.

He came across an enchanted castle and knocked on the door. There was no answer. The trader crept inside and found that the castle was empty. However, there was a table covered with dishes of food and a large, comfortable bed. After eating a full meal, he curled up in the bed and went straight to sleep.

The trader woke up feeling fresh the next morning and still there was no sign of life in the castle. While searching, he came across a vibrant rose bush in the garden. He thought to himself that Beauty would love a rose as a gift when he arrived home. He reached out and cut a red rose from the strange bush.

Immediately, a violent and loud roaring sound came from the bush. Something swept the trader off his feet and tumbled him to the ground. A vicious Beast jumped out of the bush. He towered over the trader and scowled down at him.

He wore a long, red velvet cape around his furry neck.

‘You come into my home and then you dare to steal my roses!’ he boomed.

The trader was speechless. His face froze in horror.

It was then that a little voice shouted from afar, ‘Father!’

It was Beauty. She had gone in search of her father when he had not returned home on time.

She jumped off her horse and ran to the garden. She stopped by her father’s side and stared up at the Beast.

The Beast looked at them both.

‘I will let you go. To pay for your crime, your daughter stays with me forever,’ he growled.

The father begged the Beast not to give them such a punishment. However, Beauty loved her father very much and she promised to stay in the castle if he was allowed to go free.

At first, Beauty was terrified to stay in the castle. She was afraid of the Beast’s monstrous looks. However, Beauty soon learned that the Beast’s heart was kind. He treated her with care; making sure she was fed and warm. He would keep her company while she was reading or exploring the castle.

The Beast fell in love with Beauty and eventually asked if she would marry him. However, Beauty refused as she still missed her father and wanted to see him again.

The Beast then showed her a small magic mirror.

‘Ask the mirror to let you see your father,’ he said.

The mirror lit up and there, in the glass, was Beauty’s father. He was very ill in bed and he was all alone.

Beauty cried out in terror, pleading, ‘Beast, please let me see my father, he is dying.’

Despite the promise she had made, the Beast agreed to let Beauty go as he wanted to see her happy. Beauty left for weeks to nurse her father back to health and she was happy at home.

One night, when she had been at home for some time, Beauty had a terrible nightmare in which she saw that the Beast was ill. He was dying in his bed. Beauty was afraid for him. As soon as she woke up the next morning, she ran straight back to the castle.

She saw the Beast lying in the same bed that she had seen in her dream.

Then, all of a sudden, the Beast transformed into a handsome young prince. He stood up and turned to face Beauty.

‘I was once a prince but I was put under this terrible curse. Only true love could break it. You have saved me because you learned to love me for who I am. You did not look at me and see only a Beast.’

Overjoyed, the couple married and lived happily ever after.