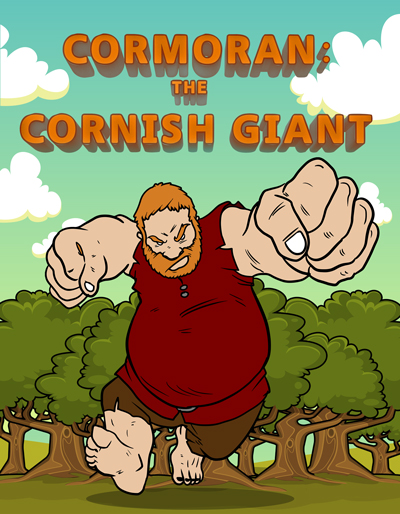 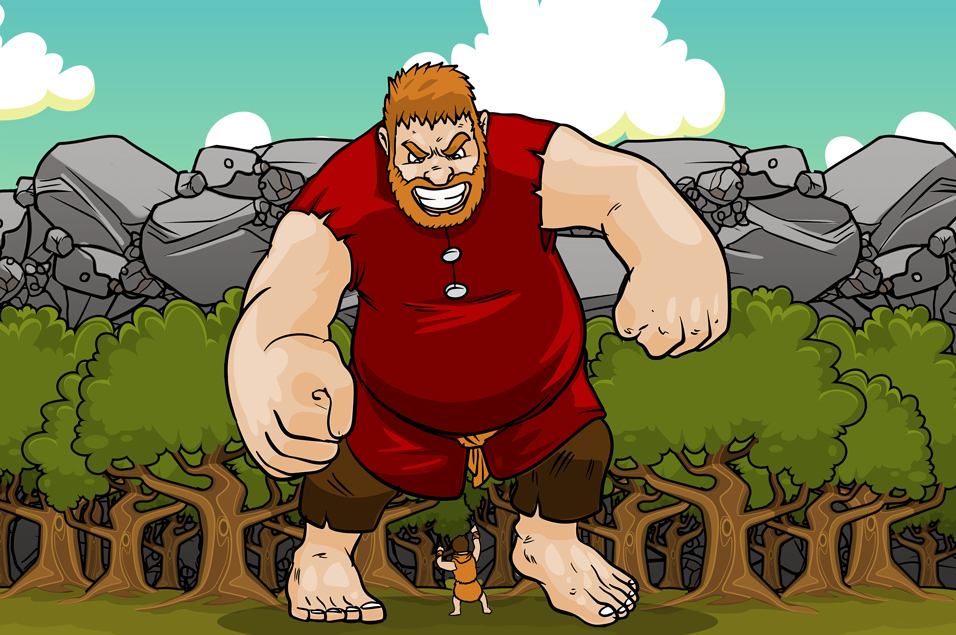 The giant was called Cormoran. He lived a very long time ago and he wasn’t always very nice. Cormoran was huge, bigger than any of the trees in the surrounding forest. He had a big bushy beard and small, mean-looking eyes.

Cormoran lived in the forest with his wife, Cormelian. She was almost as tall as Cormoran and was very proud of her huge apron, which she had made herself.

One day Cormoran said to her: ‘I want to build a stronghold out of granite.’

Cormelian scratched her head. Her hair was almost as bushy as Cormoran’s beard.

‘Yes, my dear, but all of the granite is far away in the quarry. Why don’t we build it out of green stone? We won’t have to go as far to get it.’

Cormoran, however, did not think that green stone would be good enough for his stronghold.

‘Don’t be so lazy!’ he shouted at her. ‘We’ll use granite! Granite is nice and strong. We’ll go to the quarry every day until we have enough rocks to make a stronghold, it’s going to be even bigger than us! You can use the pockets in your apron to hold the rocks.’

‘Don’t be silly. Get to work!’ snapped Cormoran.

So Cormoran and Cormelian got to work and began to pile the granite rocks on the forest floor. By the end of the first week, they had managed to get enough boulders to create the base of their stronghold, but it only came up to their ankles.

‘This is going to take a long time,’ thought Cormelian.

Now, not only was Cormoran rude and mean, he was lazy. During the hot afternoon, he would sit in the shade of his favourite tree and take a nap.

The second week, tired from the first week, Cormelian thought to herself: ‘The green stone is far lighter to carry. If I hide it under some of the granite, then I’m sure that Cormoran will never notice. We wouldn’t need a stronghold in the first place if he could just get on with the neighbours.’

So Cormelian collected the green stone, put it in her apron and walked over to the pile of boulders which would one day become St Michael’s Mount, when suddenly Cormoran woke himself up with a huge snore.

‘What do you think you are doing?’ he shouted. ‘I told you to only collect granite! Put that green stone back where you found it!’

Cormelian sighed, but not wanting an argument, she put the stone back in her apron.

On her way back down the causeway, the apron strings snapped and the green stone tumbled to the ground. Cormoran grumbled and rolled his eyes, but as he didn’t say anything, Cormelian decided to leave the stone there. After all, it wasn’t in anyone’s way.

This pile of green stone is now called Chapel Rock and it is where people catch the ferry to go to St Michael’s Mount at high tide.

Eventually, Cormelian and Cormoran finished the stronghold, which towered high above them.

‘Good,’ said Cormoran. ‘Now I don’t have to worry about any pesky neighbours.’

When the villagers saw the Mount from their windows, they cried: ‘Who will stop this giant? None of our cows or sheep will be safe now that Cormoran can take them to his stronghold! We’ll starve!’

Jack, a local boy, was fed up with the bad-tempered giant stealing his livestock. He decided to act. One night, he crept out and set a trap to teach the giant a lesson.

Jack dug a ginormous pit near the causeway and covered it up with straw and branches to hide it.

When it was ready, Jack walked up to the front of St Michael’s Mount and blew his horn.

Outraged at being woken up from another of his naps, Cormoran stormed out of his stronghold.

‘What do you think you are doing, creating such a racket?’ bellowed the giant.

‘I bet you can’t catch me!’ called brave Jack.

‘I shall chase you and catch you, then you will be sorry you ever woke me up!’

‘Come and get me, then!’ said Jack, running back down the causeway.

Jack was quick, but Cormoran had longer legs and was soon on his heels. With every step of the giant’s huge foot, the earth shook and the trees shuddered.

At the last second, Jack turned off the causeway and when the big clumsy giant couldn’t stop in time, he fell down the pit.

Jack walked to edge of the pit and peered down.

‘I hope this will teach you a lesson!’ he said. ‘Giants shouldn’t steal our livestock!’

Jack went on to live a life of adventure in which he dealt with cruel giants. Perhaps you’ve heard of Jack and the beanstalk? As for Cormoran and Cormelian, they never bothered their neighbours again.