Half a Year in Grã-Bretanha Emily Dicks 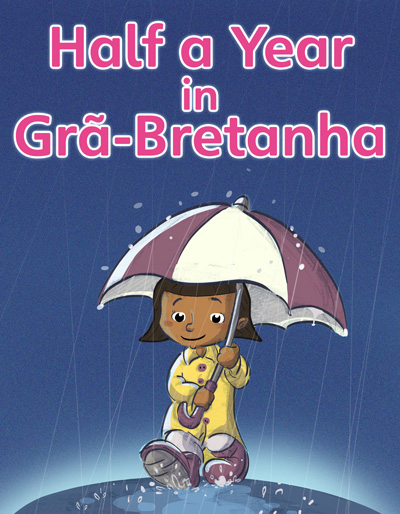 Half a Year in Grã-Bretanha 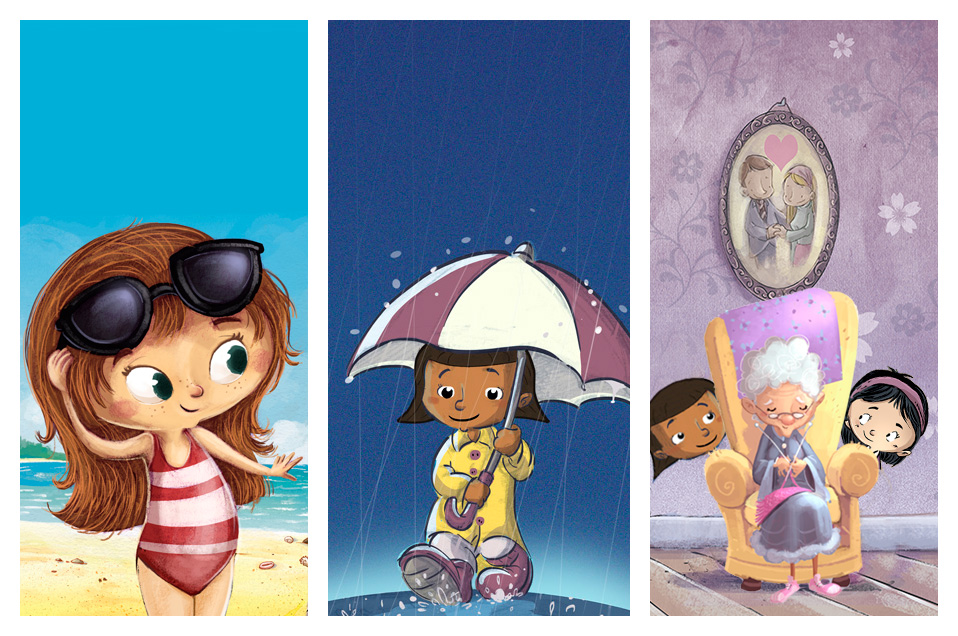 Half a Year in Grã-Bretanha

A Story from Brazil and Britain 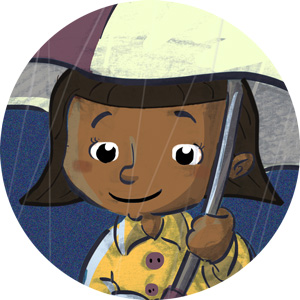 ‘Why does it always rain here?’ Natalia asked her mother.

Natalia’s mother looked up from her newspaper in surprise. ‘It rains in Brazil too,’ she said. ‘Don’t you remember? It’s summer there now but it will rain in the winter.’

Natalia shivered and looked out of the window at the rainy streets of England. She could no more imagine going outside in a swimming costume right now than going to the moon. She looked back at the computer on the little desk in the library. The screen was showing half a dozen photos of her friend Rita on the beach. Rita looked tanned and happy and Natalia felt a pang of jealousy.

‘It’s nearly time to go,’ said Mamãe. ‘The library is closing. Finish your email and then let’s get home.’

Natalia took her seat at the computer and finished off the email to her friend Rita:

I miss everyone in Rio, especially you! It’s cold and rainy here. Your photos are cool.

February soon followed January, and it wasn’t long before Natalia received news from her friend Rita once more.

It’s so hot here! We are all getting ready for Carnival. I am getting my costume ready and Uncle Rufino is playing tambourim in the Samba School again. It’s getting so close! Wish you were here.

‘Carnival,’ Natalia sighed to herself. It was the best time of year in Rio de Janeiro. ‘I wish I was back in Brazil now,’ she thought as she typed away at the computer in the library…

Thanks for your photos! Tomorrow I’m going to my friend Emma’s house to make pancakes for Shrove Tuesday. We’ll have sugar and lemon on them but it won’t be the same as Carnival. It is still cold here and it seems to rain all the time!

As Natalia and Mamãe walked home through the dark and rainy streets, the young girl listened to the rain splashing from the car tyres travelling up and down the road beside her. She imitated the sound of the rain to cheer herself up.

And so Natalia cheered herself up in the rain by schwooshing and splatting and chuki-chuki paffing all the way home.

How is England? Today we went to the beach and we were one short for volleyball. You are the best of our cousins at volleyball and so we all missed you very much!

It’s really hot here still. I am drinking a lot of coconut water to keep cool! I took a photo for you so you won’t forget!

I miss coconut water! And açai juice with granola. But most of all I miss cupuaçu juice! I wish we had cupuaçu here. We have peaches and melon but nothing tastes as good as back home.

Spring was beginning to break in England as Natalia sat with her friend Emma at the computer screen during after-school club.

‘Look at this, Emma!’ Natalia exclaimed in excitement. ‘Rita has sent me some photos of Botafogo playing against Fluminese.’

Emma moved closer to the screen so that she could get a better look at the pictures of men running about in their colourful sports clothes. ‘Who are they?’ she asked.

‘They are Rio football teams,’ Natalia replied, unable to disguise the excitement in her voice. ‘Football in Brazil is so good! I wish I could take you to a match so that you could see for yourself. They have samba bands playing in the terraces, and whenever there is a goal scored the crowd goes crazy! The bands play so loudly and everyone chants and sings. It’s like a big party. Look, I’ll show you!’

The two girls searched for more videos of football games in Rio. They watched the city come to life through the screen. The sounds flowed out into the darkening classroom while the colours flickered and danced on the walls. Natalia tried to imagine that she was back home in Aunt Susana and Uncle Feliciano’s apartment on the hill, in the room she shared with Rita and her other cousins Alicia and Marina. The room was always warm and the girls always had fun looking out over the city at night. Suddenly Natalia felt very far away from home and this made her quite sad.

The seasons had changed from spring to early summer, and a milky pale sunshine often woke Natalia by shining through the curtains of her bedroom window in the early morning. Unlike Rio, it was a gentle heat that made everything shimmer. The flowerbeds in the park near the school buzzed with insects, bees went about collecting nectar to make honey, and Natalia noticed how everybody seemed to be smiling more now that the sun was out.

Today Emma and I played tennis at school. It’s really fun! It’s Wimbledon here so lots of people are excited about the tennis. We got to watch it at school and had strawberries and cream. It was really fun. It's finally sunny here and really quite beautiful!

We have tennis here too, remember? But I don’t like playing when it’s too hot. Sounds like you are having fun in England but here it's even more fun!

Here are some photos of João and me when we went on a school trip to the Botanical Gardens.

When Natalia read this latest email she could not help being annoyed with her friend Rita. It seemed that Rita was always saying how much better things were in Brazil, even though she must know that Natalia missed her home very much. In the end, the two friends ended up arguing and decided not to write to each other for a while. Natalia realised then more than ever how difficult it was being away from home and adjusting to a new country, and she was disappointed that her friend Rita was so unsympathetic.

It was a hot summer, school was over and Natalia found herself all alone. Emma had gone to visit her grandma in Scotland and Mamãe was at work all the time. Natalia was bored and missed home very much. She was tired of watching the same shows on television: the ones with stupid people dressed up as furry monsters always singing silly songs. She was even bored of drawing. All she could ever think to draw was the beach in Rio with people sitting under parasols drinking coconut water, or playing volleyball, or surfing in the warm sea. It made her sad.

Mamãe had shown Natalia how to lock the front door so that she could walk herself to the library when she wanted to. This made Natalia feel very grown up, but each time she walked to the library and logged on to the computer, she was always disappointed to find that she had no emails from her friend Rita. Natalia was very upset that they had argued and she missed hearing news from home.

But one day there was an email, not from Rita but from Natalia’s English friend Emma.

How are you? My mum asked me if you might want to come and stay with my grandma and me next month? My grandma is very old but very nice and Scotland is fun.

Natalia could not believe her luck! She ran home and waited for her mother to return from work so that she could ask to go to Scotland.

Scotland was so different from London! Emma’s grandma lived by the sea in a tiny village. In the evenings it stayed light for a long time and they went down to the beach. There were raspberries growing in the hedgerows so that you could pick them and eat them any time you wanted to. Natalia had never seen them growing wild before and was amazed when Emma picked them straight from the bushes for the first time.

On the first day Natalia saw something even more exciting than wild raspberries … the sea!

‘The sea, the sea!’ she exclaimed. ‘Let’s put our toes in the water!’ And before Emma could stop her, Natalia threw off her shoes and ran towards the waves. But when the clear blue water swirled around her ankles, Natalia shrieked in surprise.

‘I tried to tell you,’ Emma laughed, ‘but you ran in too quickly! It’s not like Rio. The water is very cold here in Scotland.’

They skipped in and out of the surf and watched the waves crashing against the rocks until their toes were numb with cold. Natalia felt happy for the first time in ages and remembered playing on the beach with Rita and João and the other cousins back home. She saw a tiny boat tied to a little wooden jetty further along the beach and the young girl thought to herself: ‘We could sail all the way round the coast of Scotland and across the Atlantic Ocean in that little boat. We would pass America and Mexico, and then the water would begin to get warmer and warmer until eventually we would wash up on the shore in Rio!’

Natalia imagined how everyone would be so pleased to see them and they would have cupuaçu and açai juice and eat feijoada and moqueca. There would be a band playing to welcome them just like the celebrations when a goal is scored on the pitch for Botafogo … schwoosh, schwoosh, splat splat, chuki-chuki-paf, chuki-chuki-paf!

Natalia and Emma played all day long until the sun began to fade. They talked about the differences between England and Scotland and Rio. They explored and walked, and they chased each other up and down the beach until they were exhausted. Then, when evening had set in and there was a cold chill in the air, the two friends headed home for dinner.

That night, curled up in bed in Emma’s grandma’s little cottage on the coast, Natalia thought how lucky she was to be able to experience other cultures and to make new friends so far away from home.

Before she went to sleep that night, Natalia promised herself that she would write to Rita and say sorry for their silly argument and tell her all about Scotland and the little cottage on the coast, and how she was even hoping that it might snow in England that winter. That was something Natalia had never seen in Rio de Janeiro!