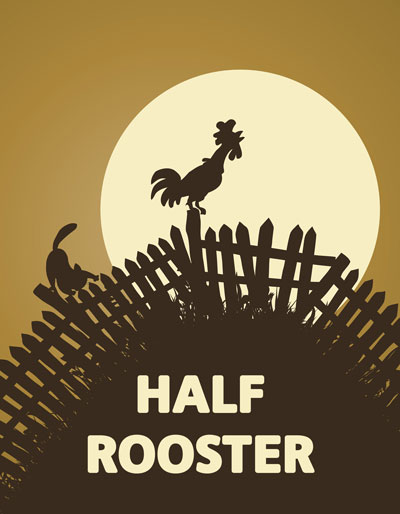 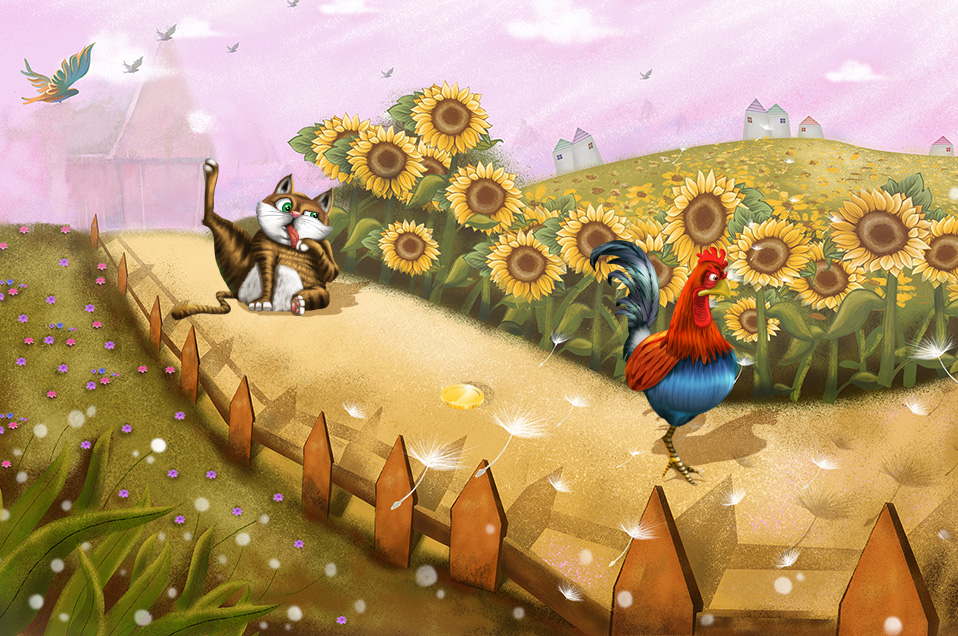 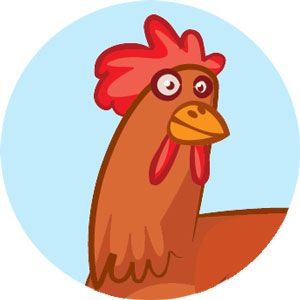 Once upon a time, there was an old man and an old woman. All they had in the world was one cat and one rooster.

The cat would catch small birds. The old woman would roast the birds and so she had something to eat.

But the old man had nothing to eat at all.

Time passed and one day he went to the rooster and said, ‘I'm sorry ... I am going to have to cut you in half and eat half of you.’

And the rooster nodded.

He cut the rooster in half and from that day on he was called ‘Half Rooster’ or, in Albanian, ‘Gjysma Gjeli’.

Gjysma Gjeli lived with the old man. But after a while he thought, ‘I have got to go and get some money.’

So Gjysma Gjeli set off hopping on one foot along the road to make his way in the world.

Along the way he met a frog in a pond:

‘Take me with you on the way

The frog jumped into the belly of the half rooster and along the way he hopped until he came to fox:

The fox jumped into the half rooster’s belly and along the way he hopped until he came to a wolf:

The wolf jumped into the belly of the half rooster, and along the way he hopped until he came to a little mouse:

The little mouse jumped into the belly of the half rooster and along the way he hopped.

Now his belly was rather full, Gjysma Gjeli went into the gardens of the palace of the king. There in the cabbage patch he crowed as only a Gjysma Gjeli half rooster can.

Well, the king came rushing out. ‘What’s all this noise? Catch that rooster!’

The king’s men went looking through the cabbage patch for the rooster. They cut the head off every one of the cabbages until they came to the last one. There, inside the cabbage, they found Gjysma Gjeli.

‘Well,’ said the king, ‘roast that half rooster!’

So they seized Gjysma Gjeli and they put him in the oven.

The frog jumped out of his belly. All of the water that the frog had swallowed from the pond came whooshing out over that fire. It put out the flames.

So there he was, put among the geese and the geese got ready to peck.

Just as they started pecking, he said, ‘Save me!’

Out of his belly jumped the fox and the fox ate up all of the geese.

Out of his belly jumped the wolf and the wolf scared all of the horses.

‘Well,’ said the king, ‘lock him up tight in a great treasure chest!’

So they opened the king’s greatest treasure chest and they put Gjysma Gjeli inside and they locked it tight.

The treasure chest was full of gold coins. Gjysma Gjeli pecked up those gold coins one by one by one until they were all inside his belly.

Out of his belly jumped the mouse. The mouse gnawed a hole in the side of the treasure chest.

Out of that hole squeezed Gjysma Gjeli with all of those gold coins inside him. He went hopping back along the way, back towards the old man. As he hopped, with the king’s men coming after him (but they weren’t quick enough), one gold coin dropped from his beak upon the way.

On he hopped until he came back to the old man.

‘I will live with you,’ said Gjysma Gjeli, ‘but you must feed me enough and give me somewhere soft to sleep. Remember to tap me with your rod every day.’

Well, the old man tapped Gjysma Gjeli with a rod and out of his beak dropped one gold coin.

The old man, with that gold coin, had enough to eat and more to spare.

Well, the old woman was jealous when she found out that the old man had all these gold coins. So she sent her cat to find gold coins.

The cat set off along the way. It came along to where the gold coin had dropped from Gjysma Gjeli’s beak. The cat ate up that gold coin and went on its way.

After that it found no more gold coins, it just swallowed other things.

When the cat returned to the old woman, she took her rod and she tapped the cat. Sure enough a gold coin came out of its mouth.

The next day, when she tapped the cat, what came out of his mouth was a salamander.

The next day, when she tapped him, what came out of his mouth was a rat.

The third day, what came out of the cat was a snake.

She became so angry with the cat that it ran away in fear.

So it was that Gjysma Gjeli and the old man lived the rest of their days in comfort.