How the Tortoise Got his Crooked Shell Abimbola Alao 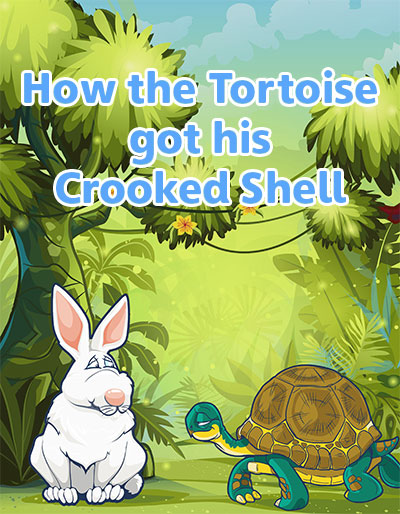 How the Tortoise Got his Crooked Shell 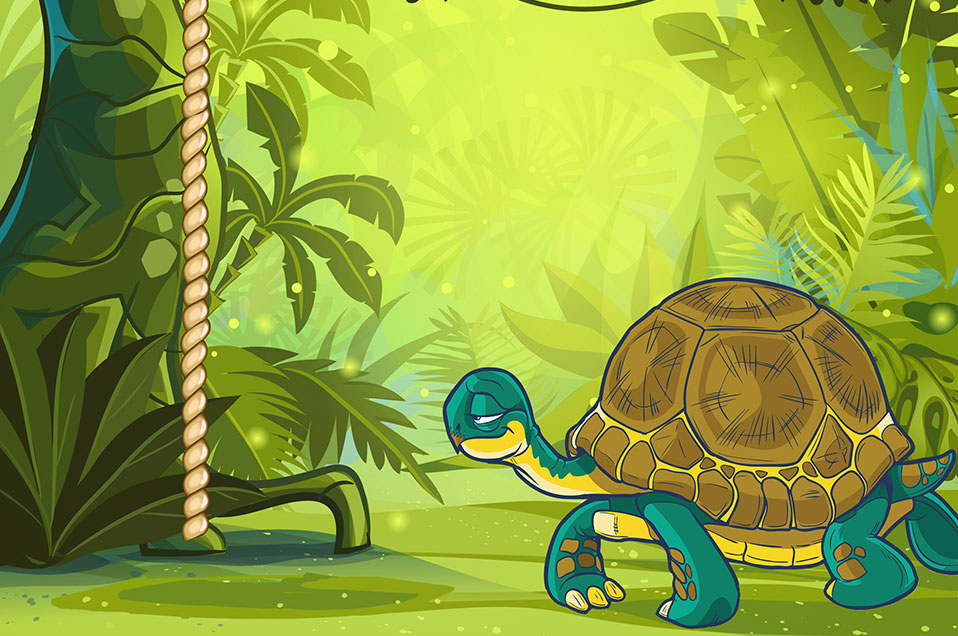 How the Tortoise Got
his Crooked Shell 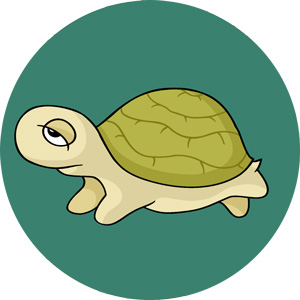 A long time ago, a terrible famine hit an ancient animal kingdom. It had not rained for two whole years and all of the crops were dying. The animals hoped and prayed for an end to the terrible drought, but the sky was no longer able to gather enough clouds, and the rains did not come.

Ijapa, the cunning tortoise, lived on the outskirts of the village with his wife and two sons.

The famine was very bad and was already having a devastating effect on all the animals, so Ijapa could no longer trick them into parting with the little rations of food they possessed.

One morning, very tired and hungry, Ijapa left his house with the intention of searching the marketplace for scraps of food, but there was no food in the market, and so the tortoise remained as hungry as ever.

However, just as the tortoise was about to return home he saw Ehoro, the rabbit, hopping towards the marketplace. There was something strange about Ehoro. He looked radiant, well fed, and full of exuberance. 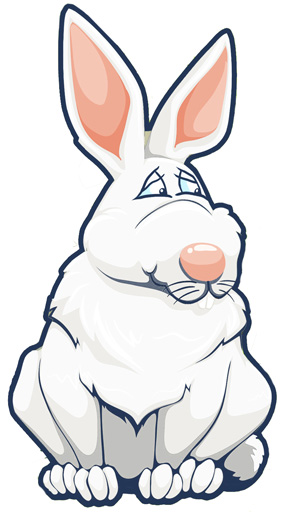 ‘Why is Ehoro looking so well and I am so hungry?’ he thought. So he approached the rabbit with his head bowed as if he were in mourning and he began to cry.

When Ehoro saw Ijapa, he rushed to meet him. ‘What is it, my friend?’ asked the kindly rabbit.

Ijapa answered, ‘My father is ill in hospital. My wife is expecting our third child but she is so hungry that I fear for her very health. And only last night I heard that my mother-in-law is dying of starvation because she does not have enough food to eat! I feel terrible because there is nothing I can do!’

Ehoro was suspicious because it was well known that the tortoise was very cunning and could not always be trusted. But Ijapa was an excellent performer and soon won the rabbit’s sympathy.

‘Meet me at Ore Brook after dark,’ said Ehoro. ‘I will help you in spite of my doubts. I just hope I do not regret this.’

Soon it was night, and Ijapa set out into the darkness to find Ehoro waiting at the brook. Once they had said their hellos, both animals made their way into the deep forest: the rabbit leading the way while the tortoise followed closely behind. Before long, they came to a narrow path that led to an opening clearing among the trees in the middle of the forest.

The rabbit stopped and pulled the tortoise to his side. ‘What you are about to see must be kept a secret, do you understand?’ The tortoise nodded in agreement and the rabbit cupped his hands around his mouth and began to sing...

Suddenly, a long, white rope descended from the sky. Ehoro grabbed the rope and began to climb. After hesitating for just a moment, Ijapa also took a hold of the rope and followed the rabbit up into the night sky.

The rabbit and the tortoise climbed and climbed until they got to the very top of the rope where there was a magnificent fluffy cloud shaped like a door. The door opened, and there stood a kindly old rabbit with a smile upon her face.

‘Mother!’ exclaimed Ehoro in a joyful voice as he embraced the old rabbit. ‘This is my friend Ijapa who has come for supper.’

Ehoro’s mother held out her hand and gave the tortoise a warm handshake. ‘Come in and eat with us. I have set the table.’

The sight that met Ijapa’s eyes made him gasp. There was a large table laden with the most sumptuous food he had ever seen. There were exotic fruits and fresh fish of all types marinated and cooked with herbs. There was also rice and yam and mouth-watering soups. The hungry tortoise dug in immediately and ate everything that he could lay his hands on.

‘Don’t eat too much,’ Ehoro cautioned, ‘or you will not be able to climb back down the rope and walk back to the village.’

The tortoise continued to eat until eventually he slumped back in his chair and gazed sheepishly around the room, his belly protruding like a huge balloon.

After they had rested for a while, Ehoro decided that it was time to return home. Ijapa rubbed his large belly, got up to his feet very slowly, and made his way to the door.

‘Aren’t you going to take some food back home for your family?’ Ehoro’s mother asked Ijapa.

‘No thank you,’ replied Ijapa. ‘I am too full in my belly to carry any food with me.’

And so Ehoro’s mother let down the rope and the rabbit and the tortoise descended back into the forest and went their separate ways home.

When Ijapa got home his family were still sleeping, so he crept into his bed, covered himself up with his blanket, and fell into a deep sleep for twelve hours.

When he eventually awoke, Ijapa was very hungry. ‘I need food,’ he thought to himself. ‘I need food and I need it now.’

It was then that Ijapa had an idea. ‘I will go back to Ehoro’s house while he is still at work. I will think of some lies to tell his mother when she lets down the rope, and I will fill my belly once again.’ 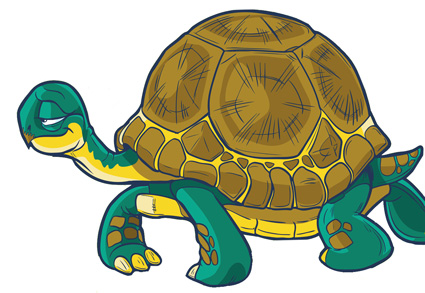 When Ijapa arrived at the open space in the forest, he cleared his throat and began to sing the same song that Ehoro had sung the previous night...

The trouble was, Ijapa had a rather husky voice and the song did not sound as beautiful or as heartfelt as when it was sung by Ehoro.

‘That does not sound like my son,’ thought Ehoro’s mother. The old rabbit hesitated for a moment, but eventually she decided to let down the rope. ‘Perhaps he has caught a cold,’ she thought, as she lowered the rope into the clearing below.

The cunning tortoise was delighted to see the rope fall to the ground and he quickly grabbed it with both hands and began to climb as fast as he could.

Ijapa was half way up the rope when he heard a voice shouting from the forest below.

‘Hey, where do you think you’re going? Come back down at once!’

It was Ehoro, and he sounded very angry. ‘Mother, we’ve been tricked!’ shouted the rabbit. Still Ijapa continued to climb the rope, his mind full of thoughts of the feast awaiting him above.

Ehoro called out to his mother again, but nothing happened. And so the cunning tortoise continued to climb up the rope into the clouds.

Ehoro cleared his throat, took a very deep breath, and began to sing to his mother up in the clouds...

When Ehoro’s mother heard her son’s voice she exclaimed: ‘Now that is my son! But who was the first caller?’

The old rabbit peeped through the clouds to see what was happening below. That was when she saw the cunning tortoise climbing up the rope towards her.

The old rabbit fetched a large carving knife and began to cut at the rope. At first it seemed as if the rope was made of iron and that the knife would have no effect at all. But Ehoro’s mother continued to hack at the rope with all her might and soon there was only a very thin strand left for the tortoise to hang on to. Then the old rabbit gave the rope a final hack with the knife and whooooaaaahhhh! Ijapa went tumbling down towards the forest below.

The winds carried Ijapa back and forth, tossing him around in the sky until he landed heavily on his back in the forest. Unfortunately for the cunning tortoise, the only thing to cushion his fall was a big rock that was sitting on the forest floor. When he landed on the rock, Ijapa’s shell cracked in so many places that it ended up looking like a jigsaw puzzle.

The tortoise awoke many hours later. He was very dazed, but he was able to move and found that he was not in very much pain after all. But his shell remained like a jigsaw puzzle and would never again return to the lovely, smooth, round shape it was before.