Keloglan and the Squirrel Meltem Basel and Anonymous 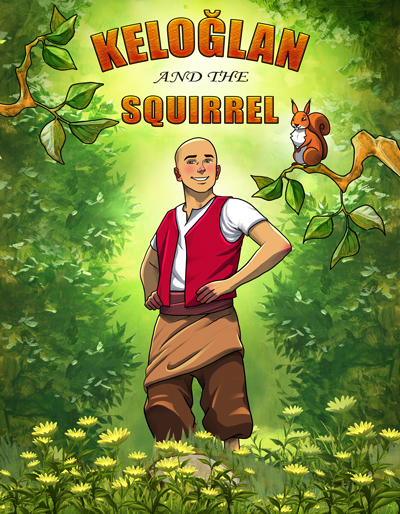 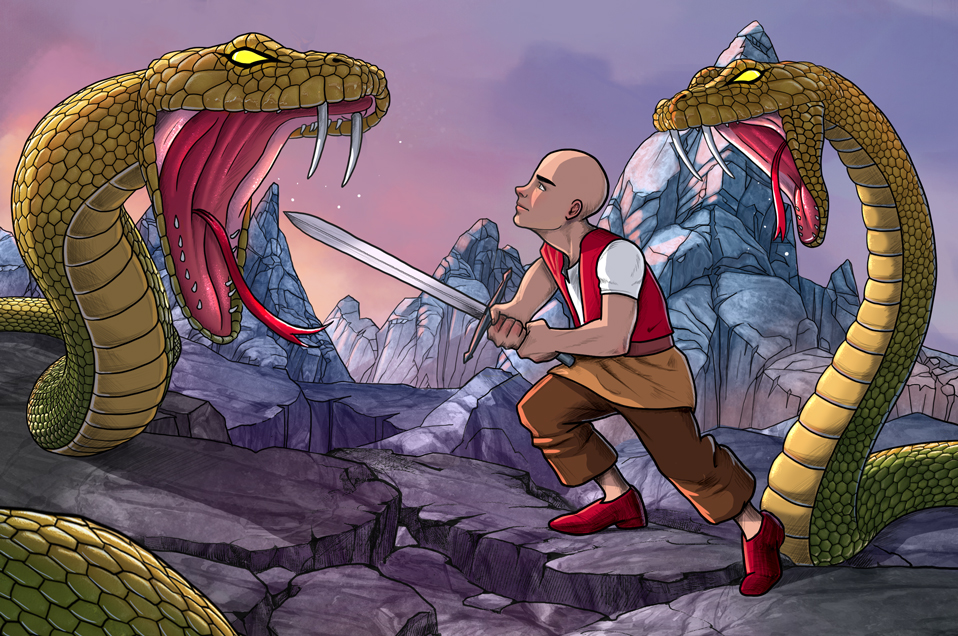 Once upon a time, in a small village in Turkey, there lived a mother and her loyal son. Everyone knew the boy as Keloğlan, which means ‘bald boy’ because even though he was still quite young, he had no hair on his head at all.

Keloğlan and his mother were very poor indeed. Each day Keloğlan would take up his basket and venture out into the woods in search of food.

‘Good luck, my son,’ the old woman would call out as Keloğlan waved goodbye and set out on his daily journey.

One day, Keloğlan was searching the forest floor for the juicy mushrooms that could often be found growing in the shadows of the tall trees. As he searched, he was sure that he could hear a young girl crying. When he looked up, Keloğlan noticed a little squirrel sitting on a tree branch above his head.

The squirrel was crying inconsolably. Keloğlan reached out to comfort the little creature. He took the squirrel in his arms, stroked it, sang to it and assured it that everything was going to be okay.

When, at last, the squirrel stopped crying, the two friends got to talking. Keloğlan explained that he lived with his mother and that they were penniless.

‘I need to come into this forest each day in search of food because we have no money,’ he told the squirrel.

It was then that the little squirrel said, ‘You have been very kind to me today, and so I am going to help you in return.’

The young boy followed the squirrel through the forest for many hours until they reached the edge of a cliff overlooking a lush green valley below.

‘You must climb down this cliff,’ said the squirrel. ‘When you reach the bottom you will find the Grouse Queen. She will ask you three questions. You must answer them all correctly to receive the prize.’

The squirrel climbed up onto Keloğlan’s shoulder and whispered the answers to the three questions in his ear. Once she had done so, she jumped down and scampered back into the forest without another word.

Keloğlan made himself a rope out of twine. He lowered himself down the cliff edge and made his way to where the squirrel had told him the Grouse Queen lived. When she saw him, the Grouse Queen stopped Keloğlan in his tracks and demanded that he answer three questions.

‘If you do not answer correctly,’ she said, in her stern voice, ‘then you will lose your head.’

Keloğlan was very nervous, but he nodded all the same and awaited the first question. The Grouse Queen indicated toward a cherry tree nearby.

‘How many cherries are growing on this cherry tree?’ she asked.

‘There are as many cherries on that tree as there are feathers on your back,’ replied Keloğlan, without hesitation.

The Grouse Queen nodded approvingly and then asked, ‘Where is the middle of the earth?’

‘You are standing on the middle of the earth,’ said Keloğlan with just a hint of doubt in his voice.

Once again, the Grouse Queen nodded approvingly. Then she cleared her throat and prepared for her third and final question.

She presented Keloğlan with two identical-looking walnuts and asked, ‘Which is the heavier of these two walnuts?’

Keloğlan looked at both nuts and then tossed them into a nearby stream. One of the nuts stayed afloat, but the other disappeared beneath the surface.

‘The one which has sunk beneath the water is the heavier of the two, Your Majesty.’

The Grouse Queen could not deny that all three answers were correct and so she reluctantly handed Keloğlan the large pot of gold that was his rightful prize.

The young boy climbed back up the cliff face with his pot of gold strapped to his back. He ran into the forest to thank the little squirrel for her kindness. But when Keloğlan eventually found the squirrel, she was crying again.

Her head rested on her tiny front paws as the tears fell to the ground all around her.

‘Why are you so sad?’ asked Keloğlan.

‘I used to be a beautiful princess until the Grouse Queen cast a spell on me and turned me into a squirrel. Now the only thing that will set me free is a single drop of emerald water from the lake in the dragon’s cave.’

Keloğlan was so very grateful to the little squirrel for saving him and his mother from a life of poverty that he promised to fetch the drop of emerald water. He marched into town and used some of his gold to buy the sharpest sword the blacksmith had ready. Then he climbed the Mountain of Kaf to the dragon’s cave.

When he reached the cave, Keloğlan raised his sword and did battle with the two giant snakes that guarded the entrance to the cave. The fight was fierce and bloody. Keloğlan eventually cut the heads from the evil snakes and threw them over the edge of the mountain.

Deep inside the cave, the evil dragon stirred. He stretched his wings and took flight to see what was happening with his snake guards. It was then that Keloğlan crept unnoticed into the dragon’s lair and filled his glass bottle with the precious emerald water.

When he was sure it was safe, he ran from the lair, climbed back down the mountain and disappeared into the forest to find the squirrel.

‘I have returned,’ he told his friend as he raised the bottle into the air, ‘and I have the emerald water for you.’

Keloğlan poured some of the water into his open palm and watched it run between his fingers and fall onto the forest floor. The last drop he saved for the squirrel, who jumped down from the tree to drink from Keloğlan’s palm.

As soon as she had taken the drop of emerald water, there was a blinding flash of white light that illuminated the gloomy forest for miles. When the light eventually faded, a beautiful princess stood before Keloğlan. Tears of gratitude shone in her eyes.

Keloğlan escorted the princess to the royal palace. When the sultan saw his beautiful daughter, he was overjoyed.

‘You are a brave man and you shall never again want for anything,’ he assured Keloğlan as he embraced the youth.

That was when Keloğlan remembered his poor mother waiting back at home for her mushrooms. He thanked the princess and the sultan. Then he took his pot of gold and returned home to his mother, shopping for gifts and food at the local market on his way.

The old woman could not believe the story that Keloğlan told her over dinner that night, but one thing was for sure – her brave son would never again have to enter the forest in search of food.

The old woman smiled to herself as she dipped her silver spoon into a big bowl of mushroom soup.