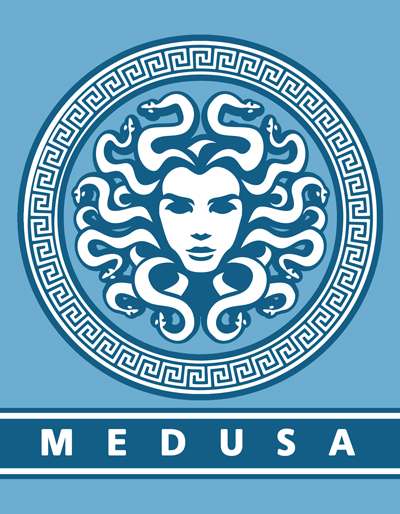 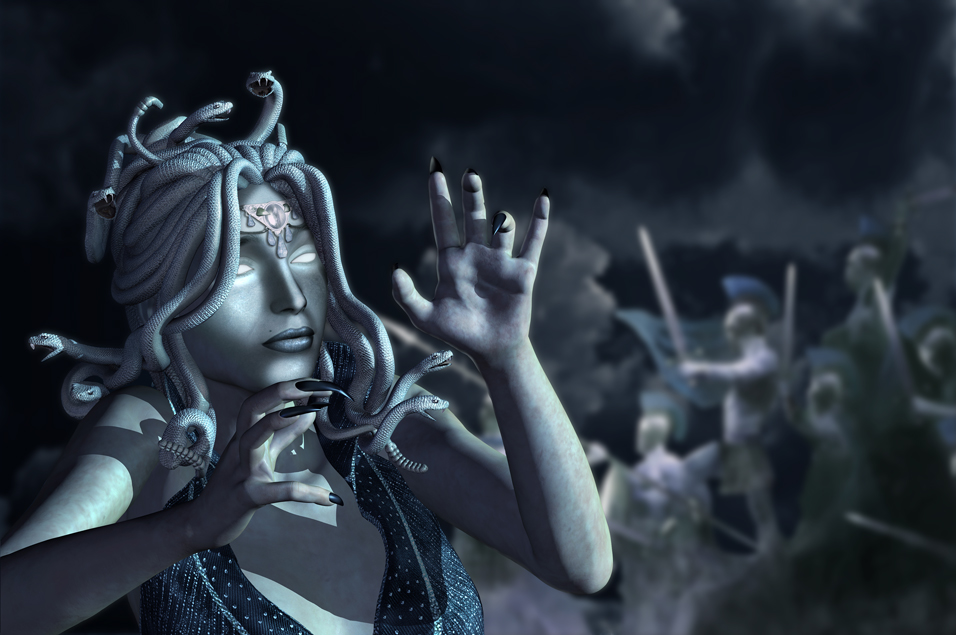 A story from Ancient Greece

Many years ago, in a world almost forgotten, there lived a young girl named Medusa.

Medusa played in the hills and ran through the streets of the ancient city of Athens with her two sisters, Stheno and Euryale. She was generous, kind and loved by all who knew her. Medusa grew up to be very beautiful and she promised her life to Athena, the goddess of wisdom and war. Athena loved Medusa for her dedication and intelligence.

One day, while working in Athena’s temple, Medusa was visited by Poseidon, the god of the sea. Poseidon asked Medusa to marry him but she refused.

Poseidon grew angry and tried to take Medusa away by force. Athena then came down from Olympus and banished Poseidon from her temple for attempting to harm Medusa and for tarnishing her temple.

Athena saw how upset Medusa was after Poseidon had gone.

She said to her, ‘I will make sure no man will harm you again if you wish, and I will do the same for your sisters if they would like it.’

Medusa and her sisters accepted Athena’s offer gratefully, as none of them wanted to be married. Athena worked her magic and changed them into Gorgons. Gorgons have snakes instead of hair and can turn any man to stone with one look.

However, before long, the people of Athens grew scared of the sisters. Even though they were still generous and kind to everyone they met and wore covers over their eyes so that they did not turn anyone to stone. The people of Athens drove them away.

For many years the sisters wandered through the land searching for a new home. One day, they found a boat and sailed across the sea. They landed on a deserted island where they found plenty of fresh water, vegetation and food. The sisters cried with joy as they were free to remove their masks and could once again live peacefully.

Almost ten years later, people had almost forgotten that the Gorgons even existed. It was then that a boat filled with soldiers landed on the island and they began searching it to see if it was a suitable place in which to build a city. The sisters were afraid of turning the men to stone. To avoid being discovered, they ran across the island and hid in a cave.

The sisters hid for three days. However, they soon ran out of food and water. Euryale set out to find some more, but unfortunately, she stumbled upon the soldiers and turned one to stone. The soldiers fled the island in fear. They took with them stories about the Gorgons. They claimed they had been attacked and that the Gorgons would hunt down any man they could find and turn him to stone.

Soon, men began sailing across the sea to the island. They went to try to kill the Gorgons and prove themselves as heroes. Each time they stayed, the sisters would run out of food. One would go outside and men would be turned to stone. Soon statues covered the island. The sisters wept. They lived in fear for their lives and for the lives of the men who hunted them.

One day, a young man named Perseus sailed across the sea to defeat the Gorgons and become a hero. He had heard that looking at the Gorgons could turn a man to stone instantly. He took with him a reflective shield in which he would look so that he would not be turned to stone.

Perseus landed on the island and used his shield to track down the Gorgons. He found the sisters sitting outside their cave. Using the reflection in his shield to see what he was doing, he snuck up behind them and beheaded Stheno. Medusa and Euryale cried out and turned to look at Perseus. As they turned to face him, he also beheaded Euryale.

At seeing her two sisters dead, Medusa fell to her knees and wept.

‘Athena, forgive me for being the monster they think I am!’ she cried. Then she looked up at Perseus to turn him to stone.

However, Perseus was ready and blocked her stare with his shield. He killed Medusa too.

Perseus put the three Gorgons’ heads in a sack and took them back to Athens. There, he placed them in Poseidon’s temple and knelt at the altar.

‘Poseidon, I have rid the seas of the Gorgon monsters in your name,’ he said.

After praying at Poseidon’s altar for three days, Perseus left the temple and was paraded through the streets of Athens as a hero.