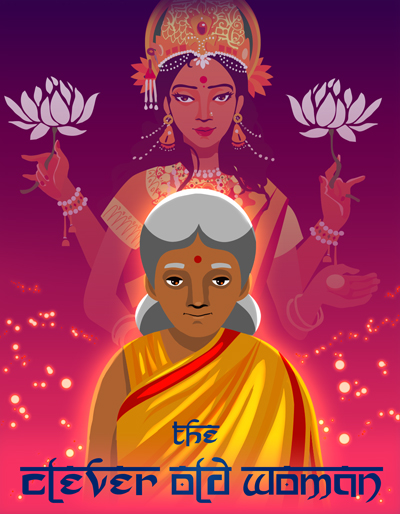 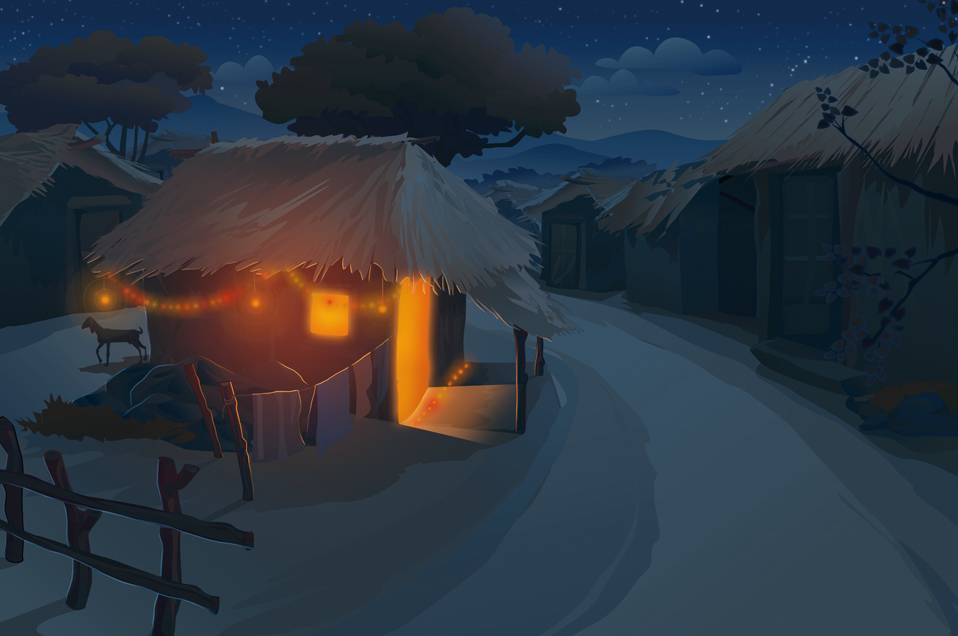 Once upon a time, there lived an old woman in a kingdom ruled by a beautiful queen. The old woman had four sons who always fought with each other and whose wives were also unkind. They all lived in the same house but, because they argued so much, everyone had separate kitchens.

The old woman was sorrowful as she wished that they would be able to live as one big happy family, helping each other. She threatened to throw them out of the house if they could not learn to live as a united family. To save money, she told her sons and their wives that they would only be able to use one kitchen. She hoped that this would mean that the wives would learn to live in harmony with each other. The sons were also fed up with the situation and agreed to their mother’s command.

As the old woman was poor, the sons all gave their daily earnings to their mother. One day the youngest son went to find work in the city, but he had no luck. He saw a dead snake as he was returning home that evening and decided he would pick it up to take something back to his mother.

When the old woman asked for his earnings, he told her that he had been unable to find work that day and gave her the dead snake instead. She advised her son to try again the next day. However, she knew that the snake would not make a good meal, and so she threw the dead snake onto the roof of her mud house.

On that same day, the queen of the kingdom had travelled to a beautiful pond to take a bath. While she was there, she removed her expensive diamond necklace and left it on the bank. An eagle had appeared overhead. The eagle had been attracted to the shining necklace and swooping down, clasped it in its claws and flew away.

The queen was so upset as losing her necklace that she had it announced throughout her kingdom that whoever could find it would receive a reward.

After flying for a while, the eagle saw the dead snake on the old woman’s roof. Realising that it could eat the snake but not the necklace, the eagle left the diamonds there and took the dead snake instead.
The next day, the old woman went up to her roof to put some clothing to dry in the sunshine when she spotted the necklace. She understood that this was the queen’s stolen necklace and that the queen desperately wanted it back.

It happened that the festival of light known as Diwali was in two days. At that festival, everyone lights oil lamps and candles to appease the goddess of wealth. The old woman made a plan. She went to the queen’s palace and asked the guard if she could see the queen. When the queen saw her necklace, she was pleased and promised to give the old woman a large sum of money.

Instead, she said, ‘Thank you very much for your offer, but I am poor and won’t be able to guard this treasure. If you agree, I would like if on the night of Diwali only my household be allowed to light oil lamps. All the other houses should remain dark.’

The queen was surprised at this request but was so grateful that she granted the old woman her wish and issued instructions that only that house would be lit at Diwali that year.

The festival of Diwali arrived. The old woman asked all the members of her household to clean every nook and cranny of the house and decorate it with beautifully-scented flowers. Everyone worked together on the tasks. In the evening, the old woman lit lamps and candles in every part of the house.

At midnight, the goddess of wealth came for her annual visit. She was disappointed to see darkness everywhere in the kingdom. Then she saw beautiful lights shining from the old woman’s house. As the goddess loved lights, she quickly made her way straight to the old woman’s house and knocked on the door. Hearing the knock, the old woman opened the door and signalled to her family to welcome the goddess with garlands of flowers, perfume and sweets. This they did, and the goddess was very pleased. She asked them what they would like her to give them in return for their devotion.

The old woman came forward and said, ‘We ask that you stay in our house forever so that we live in prosperity and happiness.’

The goddess thought for a moment and said, ‘I am happy to stay here in your house forever but only if you all stay united, not fighting but loving each other. If anyone disobeys this condition, I will leave the house.’

Everyone was so happy to know that the goddess was pleased that they all agreed to her request. Since then, all the members of the family have lived in harmony, showing love and respect for each other.

The old woman was delighted as her desire for her children to live peacefully had finally been realised. The goddess of wealth stayed in their house forevermore.