The Donkey and the Qazi of Jaunpur Anonymous 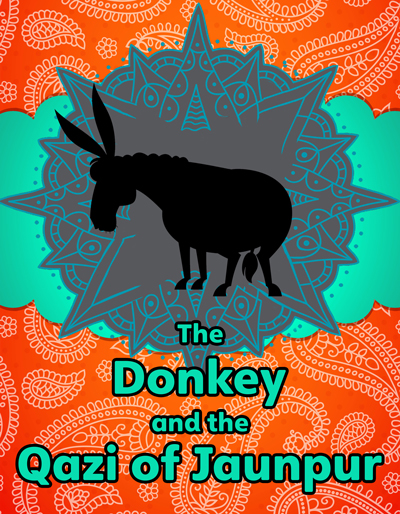 The Donkey and the Qazi of Jaunpur 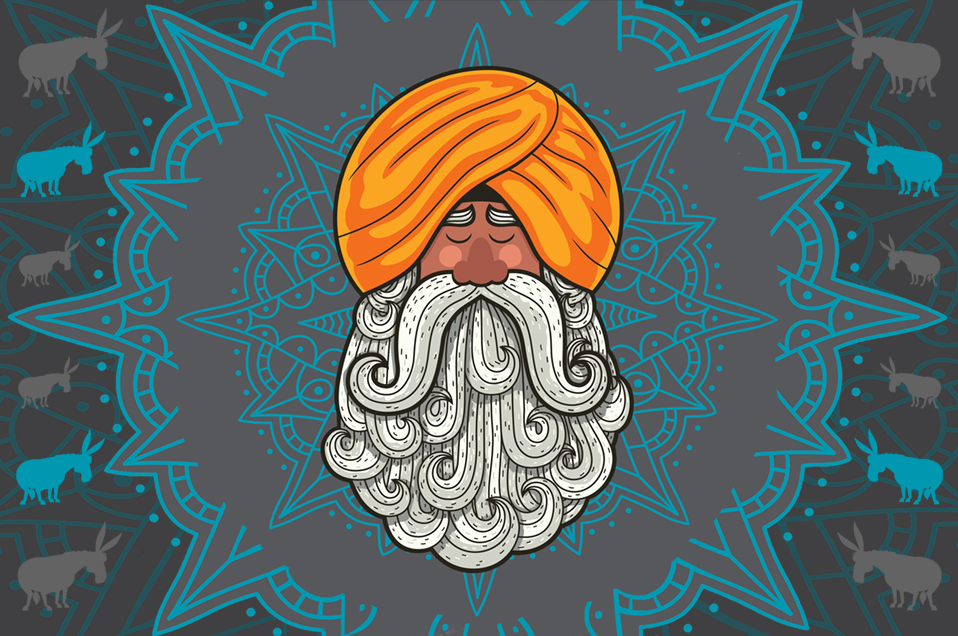 The Donkey and the
Qazi of Jaunpur

There was once a boastful and proud teacher who lived in a small village in India. This man claimed that he was so intelligent that he could turn a donkey into a man.

‘With a mixture of potions and powders and the power of my mind, that is all it takes,’ he would declare to any man or woman who would listen.

One day, Aban was passing by the teacher’s house with his lazy donkey in tow when he heard the boastful teacher telling his neighbour about his power to transform a donkey into a man.

Aban was very poor and relied on his donkey to help him carry food and goods from one village to the next. This was how Aban earned his meagre income. But because his donkey was so lazy, Aban was not able to earn enough rupees to properly feed himself and life was very difficult indeed.

‘I know what I shall do,’ thought Aban. ‘I shall ask the teacher to turn my donkey into a man and then I will finally have a son who will help me in my work and look after my wife and I when we are both old.’

And so Aban approached the teacher and asked, ‘Please will you turn my lazy donkey into a man so that I might have a son?’

Of course the teacher was not so intelligent or powerful that he could do as he claimed. As far as he was concerned there was nobody in the whole country who could actually turn a donkey into a man. But the teacher was clever enough to realise that here was a chance to make some money from poor old Aban.

‘I can turn your donkey into a man,’ the teacher lied, ‘but such a feat will cost you fifty rupees and will take me fourteen days and fourteen nights to achieve.’

As I have already said, Aban was not a rich man but he did have his savings; fifty rupees which he had slowly been putting aside since he was a boy. This money was meant to help Aban and his wife when they were both too old to work.

‘But fifty rupees is all the money I have in the whole world!’ said Aban.

‘Well that is my fee,’ said the teacher, ‘and if you wish me to turn your lazy donkey into a man then that is how much you must pay me.’

Aban thought about this proposition for a few minutes but finally reached the conclusion that he had no choice but to pay his life savings to the teacher.

‘My donkey is so lazy,’ thought Aban, ‘that soon I will not have any work at all. Then where will I be? But with a son to help me I will soon be back on my feet.’

The following morning Aban returned to the teacher’s house with his lazy donkey in tow and fifty rupees in hand. The teacher took the money and the donkey and told poor old Aban to return in fourteen days to collect his son.

‘And do not disturb me in the meantime,’ he instructed. ‘My work requires concentration and peace and I do not wish to be bothered.’

Aban agreed without further question and returned home to his wife. He was very nervous because he was now unable to work and he had no savings whatsoever. But the old man assured himself that soon all would be well. Soon he would have a son to work by his side and together they would turn bad fortune into good.

The teacher, knowing full well that he could not turn the donkey into a man, devised a simple plan in order to trick poor old Aban.

‘I shall first sell this donkey for another fifty rupees,’ he told himself. ‘Then I shall tell silly old Aban that his new son was so wise that he ran off to join the Qazi of Jaunpur.’

And so the teacher sold the donkey for fifty rupees and celebrated over the following fourteen days with expensive foods and spices and new clothes.

‘I may not be able to turn a donkey into a man,’ thought the teacher, ‘but I did come up with a very clever plan and, while I was at it, earned myself one hundred rupees.’

On the morning of the fifteenth day, Aban returned to the teacher’s house eager to meet his new son.

The teacher cleared his throat and gave the speech he had been practicing for many days.

‘After much effort and concentration I turned your lazy donkey into a strong and healthy man, and a very wise man at that. He was so wise, in fact, that he ran away and became the Qazi of Jaunpur.’

‘My son has become the Qazi of Jaunpur instead of helping his father! That is impossible!’

‘I am afraid that it is true,’ assured the teacher.

Aban did not know that he was being tricked by the teacher and was outraged that his son should become the Qazi of Jaunpur instead of helping his father at work.

The Qazi were wise men who studied and helped in matters of the law, and if things had been different then perhaps Aban would have been proud to have such a son. But Aban was desperately poor and already very hungry. Without a donkey or a son to help him, he and his wife would surely perish within the year.

The Qazi was most surprised by this outburst and the guards soon seized a hold of poor old Aban and locked him away for the night.

The very next morning, as soon as he was released from lock-up, Aban once more stormed into the court, marched right up to the unsuspecting Qazi, and demanded to know, ‘What does it feel like to have once been a lazy donkey and now to be a son who abandons his own father?’

The Qazi was truly taken aback by Aban’s behaviour because nobody had ever spoken to him in such a way. But the Qazi was a patient and generous man as well as being wise, and so he asked Aban, ‘If I was indeed once a donkey who was then turned into your son and am now a Qazi, what is it that I might do that will make up for my abandoning you?’

Aban thought about this question for a moment and then answered, ‘You can give me seven hundred rupees so that your mother and I will never have to work again.’

Much to the amazement of the guards of the court, the Qazi agreed to this request and paid the old man seven hundred rupees for his troubles.

Aban was overjoyed by such generosity and thanked the man whom he thought to be his son.

When he returned to his village, Aban was full of stories about his son the Qazi who had given him enough money to retire for the remainder of his life.

‘I am rich thanks to my generous son!’ said Aban. ‘Now I shall never have to work again!’

Everybody in the village was happy for Aban because they all knew that he was very poor even though he had worked hard his whole life. Well, everybody was happy except for the boastful and proud teacher who had so deceived the old man. The teacher simply could not understand what had happened. How was it that Aban was now rich yet he, a cunning and clever teacher, had to continue in his work? And how was it that the Qazi of Jaunpur had believed himself to be Aban’s son?

‘I shall never know these things for as long as I live,’ thought the teacher, ‘but there is one thing I do know for sure ... I will never again say that I can turn a donkey into a man!’

And that is the tale of The Donkey and the Qazi of Jaunpur.