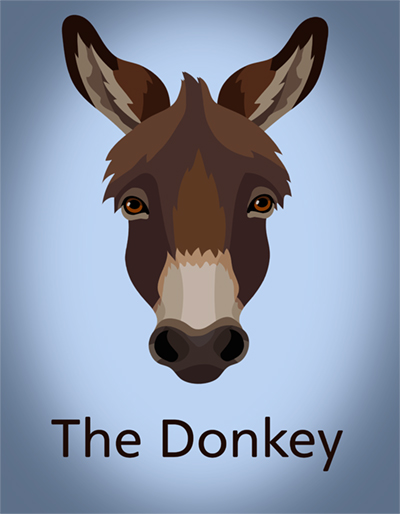 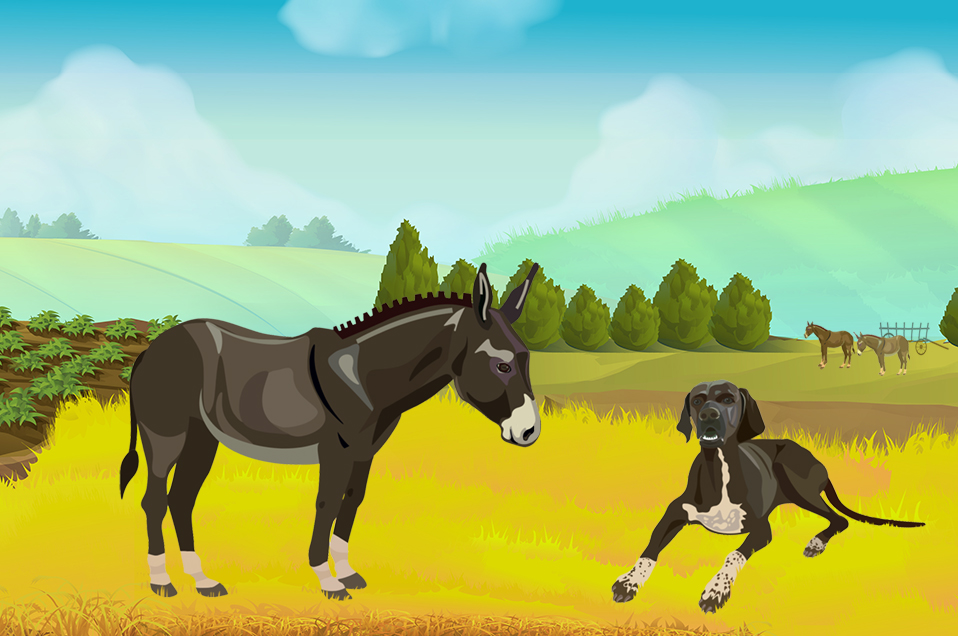 There was once a wealthy farmer who kept a stable of many donkeys. The farmer was very proud of his donkeys, and all day long they helped him work on his land by pulling the plough through the fields, or by pulling the carts to market when it was time to sell his crops.

The farmer also had a dog whom he loved very much and relied upon to protect his land and his donkeys during the night.

One day, the farmer returned home after a hard day in the fields and was so tired that he went straight to bed without feeding his dog.

The dog was extremely hurt by his master’s forgetfulness and said to the donkey, ‘What shall I do without food now that my master has forgotten to feed me? It's fine for you donkeys who get to eat grass all day long, but I'm starving and do not know how I will make it all the way through the night without food.’

‘I'm sure our master will come down and feed you very soon,’ replied the gentle donkey.

The dog was very upset indeed. He tried to go to sleep but his empty belly kept rumbling and didn't allow him to fall asleep.

Sometime during the night, the donkey noticed the shadowy figure of a thief sneaking across the fields towards the farm.

‘Hey,’ yelled out the donkey to the dog who was curled up on the stable floor. ‘You must start barking as loudly as you can so that our master will wake up and see that there is a thief coming to take all of us donkeys!’

The dog said in a most indignant voice, ‘I'm not having any of that. Why should I wake up my master after he has forgotten to feed me? If he does not care about me, why should I care about him?’

The donkey pleaded and pleaded with the dog, but it was no use at all. The dog would not be persuaded to bark out a warning to the farmer.

The donkey grew very nervous and began to kick and jump about, and at the top of his voice, began to bray, ‘Hee-haw! Hee-haw!’

When they heard this commotion, the other donkeys all joined in with the warning; all kicking and jumping and making loud braying noises.

Soon there was such a noise that the farmer jumped out of bed and ran down to the stable to investigate.

That was when he spotted the thief approaching the stable and chased him across the field away from the farm.

‘Get away from here, you thief!’ shouted the farmer, as the shadowy figure disappeared into the darkness.

And so that was how the donkey protected his friends from the thief who came in the night. But the farmer also realised something very important that night. He had noticed that his loyal dog had not barked out a warning, and remembered that he had not fed the dog, causing the animal to become very upset.

The farmer went straight to the farmhouse and soon returned with a big bowl of food for his loyal friend. He promised the dog that he would always remember to feed him and look after him because he now realised that such care to one’s animals was always rewarded with loyalty and protection.