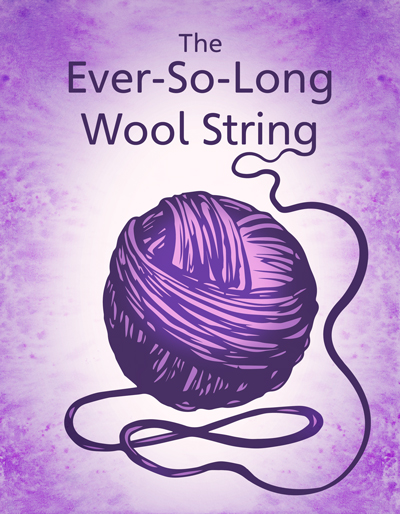 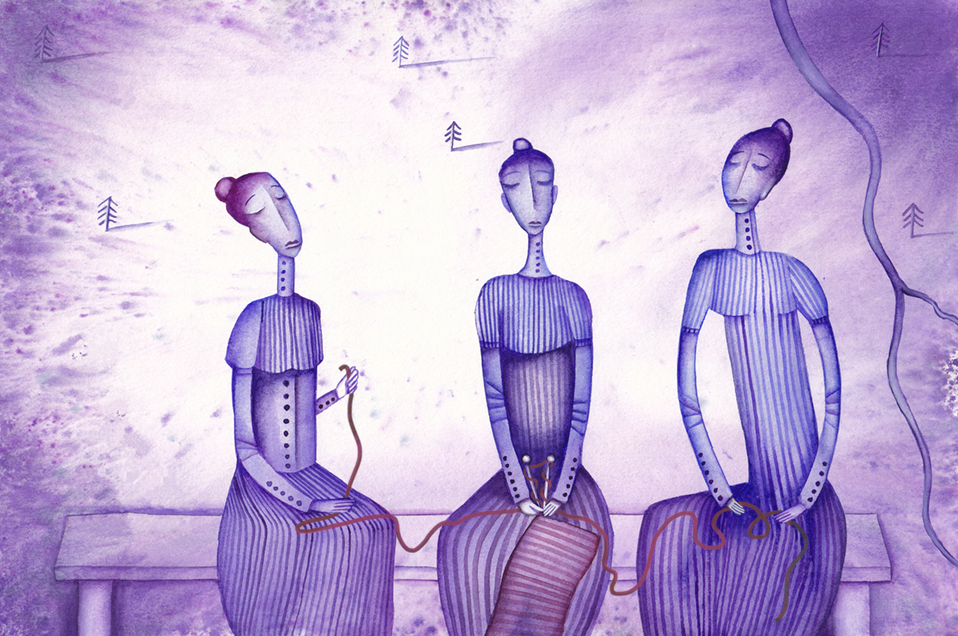 Once upon a time, there was an old woman who lived in a mountain village in Turkey. The old woman had three daughters. Their names were Yersen, Yolsen and Yonsen. The family were very poor and would spend every day weaving big red prayer rugs, called kilims, out of sheep’s wool so that they might raise money to feed and clothe themselves.

One day, the three sisters decided that they wanted to escape from their sleepy little village where nothing exciting ever happened. They were determined to go out into the wonderful, wide world and start new lives and enjoy any adventures that might come their way.

The sisters found their old mother at the weaving frame and put their arms around her to say goodbye. Their mother hugged them firmly and said: ‘My daughters, if you must go then go, but there is one thing that you must do for me before you leave this village.’

With these words, the mother pulled out three big yarns of wool string and presented one to each of her daughters in turn. ‘I will attach the ends of these yarns to your feet,’ said their mother, ‘and I will be checking if the wool strings are moving. If they are moving, this means that you are out exploring the world, which is good. But if you ever stop moving, I will pull on the strings until you are returned to your birthplace.’

Each of the sisters agreed to their mother’s request; each one in turn extending her leg so that the mother might tie the wool string to her foot.

Before they set off on their big adventure, each sister took something that might be useful to them in their new life. Yersen took a small kilim with her in case she needed one to brighten up her new home. Yolsen put on her tough boots in case she had to walk a long way on her journey. And Yonsen took her father’s compass in case she ever felt lost.

Then the three sisters set off to the east on their exciting journey; hand in hand, shoulder to shoulder on a cloudless, sunny day.

Once they were some miles from the village, the sisters came upon a water fountain and approached it so that they might quench their thirst. But just as they were about to drink from the fountain, an old woman appeared from nowhere, giving the sisters quite a fright.

Yersen was the first to answer.

‘I am looking for a cosy home,’ she said without hesitation.

Yolsen was next to answer, saying to the old woman, ‘I am looking for enough strength to walk the longest roads.’

Yonsen hesitated for a moment before she was able to give her reply.

Then she said to the old woman, ‘I do not really know what I am looking for, I just know that I want to leave here for somewhere new.’

The old woman laughed at this and said to all three sisters, ‘If you want to leave to find these things then you must cut yourselves loose.’ And with these words she took a pair of scissors from her pocket and cut the wool string from the foot of each sister.

But instead of feeling free of the attachment to home, each of the three sisters took their string in hand and held on as tightly as they could.

It was a very strange feeling indeed but the sisters did not seem to know quite what to do next.

Back in her little house in the village, it did not take long for the mother to realise that the wool strings were not moving. But instead of pulling her daughters back home as she said she would, the mother decided that she would follow the string to see where her daughters had stopped. She had noticed that the yarns of wool had not gotten very small, so she reasoned that her daughters could not have travelled too far.

Eventually, the mother reached the water fountain a few miles outside of the village. When she approached the fountain, she noticed that her three daughters were fast asleep, each clinging hold to the end of the wool string.

The kindly mother reached out and gently took the wool strings from each daughter in turn. She replaced the string with three notes, and on each note was written the same message. The message read, ‘It does not matter what you do, what happens to you is always true.’

Perhaps it is up to you to decide what became of each daughter ...