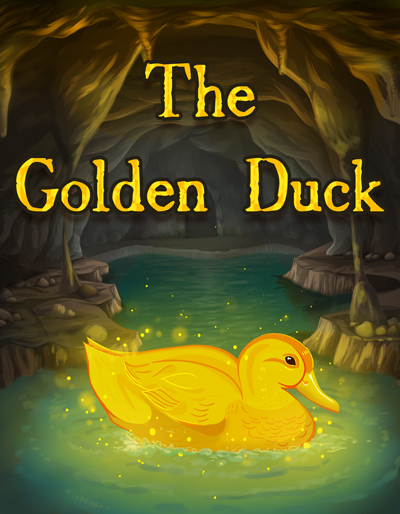 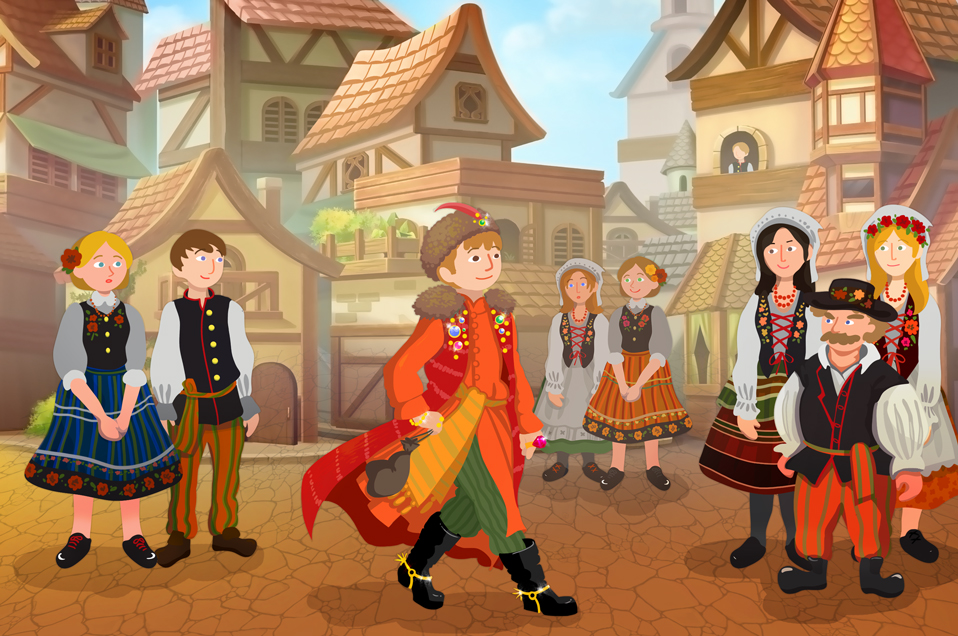 Long ago, a young boy named Lutek lived in Warsaw. He was a shoemaker, and he worked in one of the factories in the Old Town. Lutek was penniless and lived on what he managed to earn from the foreman.

In the evenings, Lutek often sat at the inn and listened to the exciting stories of older residents. He liked the tales so much that he often imagined being a brave warrior on the battlefield or a wealthy merchant travelling across distant lands. One evening, he heard the quiet conversations of the masters.

“Apparently on Tamka Street, in the basement of the Ostrogski Castle, there is a golden duck.” Master Jan whispered mysteriously.

“I heard that it is a beautiful bird, but also very crafty and dangerous,” Master Bartłomiej added.

“Why is it dangerous? How can a duck be dangerous?” others asked.

“Looking for the duck can get you lost in an underground basement. You might never return to the surface. They say that many have already tried and never returned,” Master Jan replied.

“What if someone meets the duck?” asked young Staś. He was the son of one of the masters.

“Then the duck will make him rich forever,” replied the masters.

Lutek heard these words and immediately ran out of the inn. He headed straight to Tamka Street. He reached the castle and found the entrance to the underground basement. It was dark, cold and damp.

The boy walked the corridors for a long time. At first, he was looking for the duck and then looking for the way back. He was so tired and cold that he lost all hope of returning home.

Eventually, Lutek found himself in a large chamber with a high vault, decorated with gold. Within the vault, there was a beautiful blue lake on which swam the golden duck.

“Hello, Lutek,” she said in a human voice. “You found me, so you deserve the prize. I will make you rich. Take this pouch; there are one hundred golden ducats inside. Buy whatever you want, but you have to spend it all in one day, and you cannot share it with anyone. If you do not meet these conditions, you will remain poor forever.”

Lutek grabbed the pouch and headed back. This time the corridors seemed brighter and easier to find, so he quickly got to the top.

Warsaw was waking up. Shops were slowly opening, and people were coming out to the streets.

“At last, I am rich!” thought Lutek. He ran towards the market. First, he bought all the delicacies he had ever wanted. Then he went to the tailor and dressed in the most expensive outfit. It was decorated with precious stones and gold, paired with leather shoes with golden spurs.

Then he went to the best restaurant and ordered the most expensive dishes to eat and the noblest honey water to drink. Many people introduced themselves and engaged in polite conversation. They were counting on a donation from such a rich young man. However, Lutek did not give anyone a penny.

In the afternoon, he bought the most magnificent horse. At the jeweller, he ordered a gold ring with the largest diamond. In the evening he went to the theatre, where he sat in the prince’s lodge.

As the evening grew dark, Lutek’s purse was still half full. The stores were slowly closing. Lutek was too full to eat any more. He wondered what else he could spend money on when he heard a voice:

“Noble sir, please help an old beggar. The war took everything I had.”

He looked around and saw the hunched figure of an old man in the shadows. The rags he was wearing had indeed once been a beautiful soldier’s uniform.

Lutek reached into his pocket and pulled out a handful of ducats. The moment he handed them to the beggar, a bright light shone right next to him.

He heard the voice of the golden duck: “You have not met my conditions! You will always be a poor shoemaker!”

“Good!” he said. “I could not live like that anyway, because I would never be truly happy. Money does not give you happiness unless you have someone to share it with.”