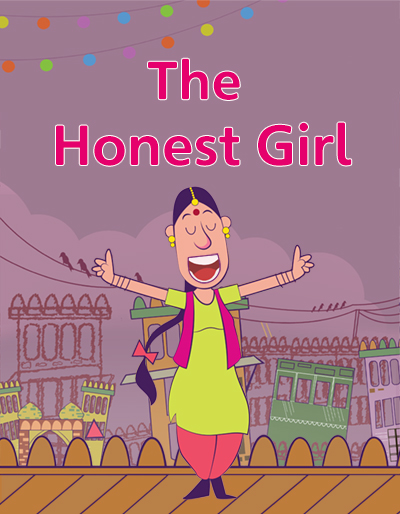 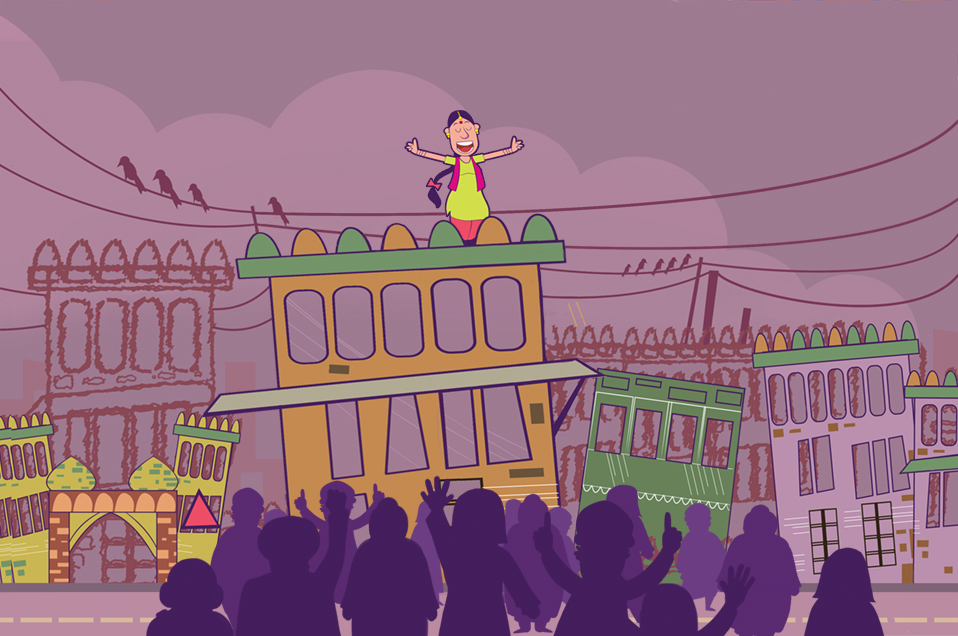 A mother and a father had a daughter who grew from a baby into a beautiful girl. The mother and father were very proud of their daughter, and one day the father said, ‘It is time you were married, my beautiful daughter.’

And so it was agreed that the mother and father would travel to the next village to make arrangements with the family of the boy whom she would marry.

She decided that she would have four children: three boys and one girl. She would call them Mulak, Jahaan, Dhesh, and Lutdi.

She imagined what it would be like to call out to her children when it was time for them to come in for dinner. The little girl was so absorbed in her beautiful daydream that she climbed up onto the roof of her parents’ house and called out ... ‘Mulak, Jahaan, Dhesh, Lutdi!’

And as the honest girl called out these names, the people of the village all stopped what they were doing and turned towards the house where the honest girl lived with her parents.

Then, one by one, they began to run towards the house because they thought that the honest girl was in trouble.

You see, in Punjabi, the names Mulak and Jahaan also mean ‘people’. And the name Dhesh means ‘land’. And, although Lutdi is a name one might give to a girl, it can also mean ‘I am being attacked!’ And so you might understand why all of the villagers began to run towards the house where the honest girl was standing upon the rooftop calling out the names of her imagined children... The villagers were afraid that the honest girl was being attacked!

But even stranger, at that very moment there was indeed a group of thieves who were trying to sneak into the house where the honest girl lived. The gang of thieves intended to steal everything they could get their hands on because they had heard that the mother and the father were away in the next village and the girl was all alone in the house.

But when the thieves noticed that all of the people from the village were approaching the house, they got scared and ran away into the surrounding woods, never to be seen again.

As the villagers arrived at the house, they called up to the honest little girl. ‘What is wrong, my child, who is attacking you?’

And the honest girl replied, ‘There is nobody attacking me. I was just calling out to my children.’

‘But you are not yet married!’ said one villager.

‘And you do not yet have children!’ protested another.

The girl had great difficulty explaining to the villagers that she was simply dreaming about what her life was going to be like after she was married and had children. The villagers were not impressed at all. They accused the honest girl of daydreaming and causing trouble and not thinking before she spoke.

But then a wise man appeared from behind the house and explained to the assembled crowd how he had seen a group of thieves running from the house, and how the villagers had scared them away and saved the honest girl from a terrible fate.

He said, ‘Mulak and Jahaan are the names we give to our people. Dhesh is the name we give to our land. And when this honest girl called out to the people of her land, you all came. When she called out “Lutdi” you were all here to help her in her time of need. Does this not prove that you are all good people?’

The villagers had to agree with the wise man, and they were all very proud that they had saved the honest girl from the thieves.

Then the wise old man looked at the girl and said: ‘Perhaps it is also true that it is a good thing for a young person to daydream once in a while. After all,’ he said with a smile, ‘look what became of your daydream and how it saved you on this day.’

Soon after, the mother and father returned to the village and the honest girl was married to her handsome husband.

The years passed, and the girl grew into a beautiful woman who did indeed have four beautiful children. She never forgot about what the wise man had said to her on that day, and she often reminded her children that it was a good thing for a young person to dream from time to time because amazing things come from dreams.