The Lion with the Red Eyes Amina Shirdon 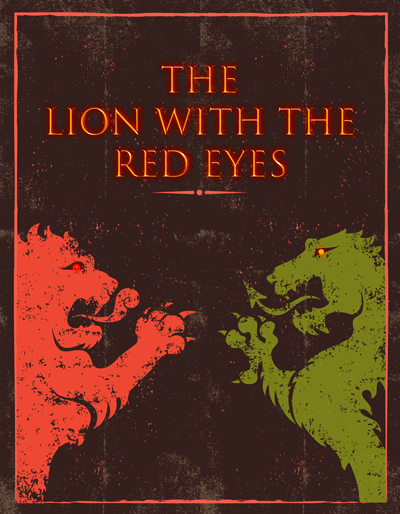 The Lion with the Red Eyes 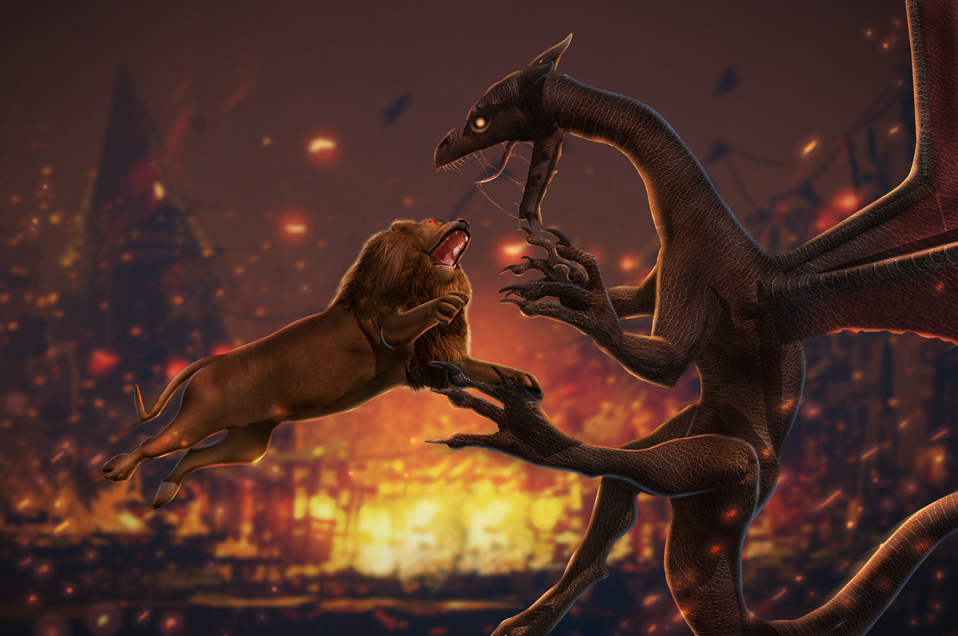 The Lion with the Red Eyes

A very long time ago, there was a small village in Somalia in Eastern Africa. On the edge of the village there was rich farmland where the people grew their crops and tended to their sheep. The village was very beautiful but it could also be very dangerous, and it was sometimes hard to protect the crops and the sheep from neighbouring villages or dangerous thieves. There was even talk about dragons that would come in the night and burn the crops and eat all of the sheep and goats.

In order to protect themselves from such dangers, the villagers raised lions from birth who later became guardians of the land. The lions were strong and proud and looked after the crops and the animals and kept the village safe. They were loyal to one another and would fight to the death if ever it was needed.

But one day, a lion cub was born who was different from the others. Unlike the rest of the pride, this lion was born with red eyes that glowed like fire. This made the other lions uncomfortable and so they named the strange cub Bahdoon which means 'one who is born away from his home'. They named the little cub Bahdoon because they felt as if he did not belong with them in the village.

Life was not easy for Bahdoon – he was treated badly and never invited to play with the other cubs. He grew up lonely and was always reminded that he was different. His red eyes singled him out from the rest of the pride and the mean cubs would often call him names and play tricks on him.

Eventually it was decided that Bahdoon should be banished from the pride, and so he was told to leave the village and never to return.

Poor Bahdoon entered the jungle all by himself to start his new life of solitude. He was very sad, and often very lonely, but at least he was not surrounded by the other lions who always made fun of his red eyes and always reminded him that he was different.

The years passed and Bahdoon grew into a big, strong lion. He was very good at hunting and made a life for himself in the jungle. But he was always lonely and he would often walk to the edge of the jungle at night to look down upon his old village. He would admire the brave lions standing guard over the animals and the crops, and he wished with all his heart that he could join them and be accepted back into the pride.

It was on one such night that Bahdoon first saw the fierce dragon swoop out of the starless sky and attack the village, burning houses and crops with flames from its mouth, and snatching sheep from the ground with its sharp talons before disappearing into the night.

The lions tried their best to defend the village, but the dragon was too fast and too strong. Many of the lions were killed that first night as Bahdoon watched helplessly from the jungle.

The dragon attacked again the following night, and again and again, until the villagers were too afraid to come out of their homes. Many of the animals were now gone, and the lions had suffered greatly in trying to defend the village; most had been killed and the rest were very badly injured. The village would not survive many more attacks by the fierce dragon, and some of the villagers had even packed up their few belongings and fled into the jungle for safety.

By the fifth day, Bahdoon could not bear to see his old village suffer anymore, and so the brave lion swore to himself that he would defend its people and the pride no matter what they had done to him in the past.

That night, Bahdoon crept close to the village under the cover of the tall trees that lined the edges of the jungle. He kept one eye on the night sky at all times and listened for the flapping of the dragon’s wings on the still air. He felt strong and determined, and he told himself that tonight he would destroy the fierce dragon and restore peace to his beloved village once more.

Suddenly, Bahdoon heard the flapping of wings above. He looked up into the night sky and could see the silhouette of the fierce dragon swooping down towards the village: its long talons glowed silver-white in the moonlight, its eyes scanned the ground for new prey, hungry and menacing.

It was then that Bahdoon summoned all of his strength, all of his bravery and determination. Just as the dragon swooped low above the village, Bahdoon charged out from the jungle and roared with all of his heart. The dragon was surprised and scared to see two flaming eyes come rushing out of the jungle, and the roar of the brave lion struck fear into its cold heart.

Bahdoon leapt up into the air and wrapped his strong paws around the dragon’s tail and pulled the beast to the ground. The brave lion and the fierce and evil dragon were locked in battle, but the dragon soon lost its strength when faced with such a skilled warrior.

Bahdoon was too strong and brave for the dragon, who was not used to such an enemy. Bahdoon’s red eyes flashed in the night as he battled with the dragon, and soon the villagers came running out of their homes and began to cheer for Bahdoon, which made the brave lion fight even harder.

Eventually, Bahdoon won the battle and killed the dragon. The few remaining lions also cheered for brave Bahdoon and all celebrated his victory over the beast. The village would be safe once more and those who had fled to the jungle might return to their homes at last and begin replanting their crops and raising new lambs and kids into sheep and goats so that they might once more have milk and cheese to eat.

Bahdoon was welcomed back into the pride and became the most celebrated warrior of the village. The lions were very sorry that they had sent him into the jungle, and they realised then that just because he was different it did not mean that he should be treated differently.

At last, the brave lion was accepted by the pride and for the first time in his life he felt like he belonged. Bahdoon had finally returned home.