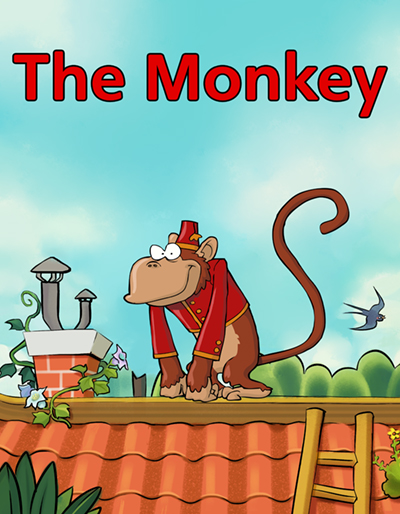 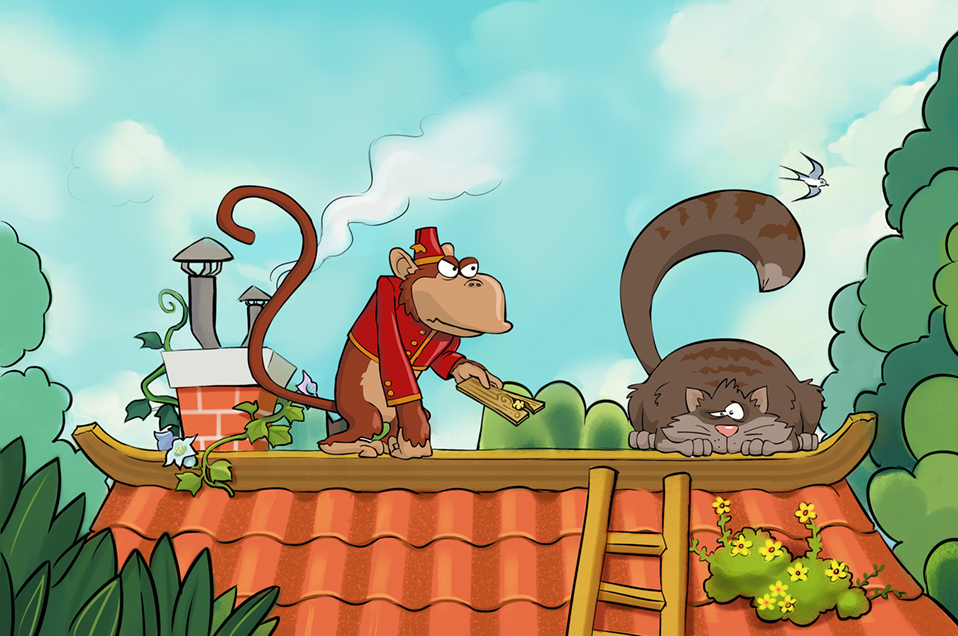 Once upon a time, there was a naughty monkey who lived on the rooftops of a little town.

One day, the monkey spied a man in the street eating some delicious popcorn, and he thought to himself, ‘I'll have that popcorn,’ and jumped down from the roof and reached out for the bag in the man’s hand.

Well, the man was very scared because he thought that the monkey was going to attack him, so he dropped the bag of popcorn and ran away, leaving the naughty monkey to pick up the bag and climb back up onto the rooftops to find a nice quiet place to eat.

It didn’t take long for the monkey to find a nice quiet spot, and so he sat down and started eating all of the popcorn. He ate the whole bag very quickly... all except a single piece of corn which had dropped from the bag and become stuck in a piece of wood.

Try as he might, the monkey couldn't pull the corn from that piece of wood. And so he took the wood to the woodcutter and said, ‘Woodcutter, cut this piece of wood for me so that I can eat the last piece of corn that is stuck there in the grain.’

‘Why should I do that?’ replied the woodcutter. ‘That piece of wood has done nothing to harm me.’

The monkey was very annoyed, and so he went straight away to the Queen and said to her, ‘Queen, you must punish your woodcutter because he is not doing as he is told.’

‘Why should I do that?’ replied the Queen. ‘That woodcutter has done nothing to harm me.’

The monkey was now even more annoyed, and so he went straight to the mice and said to them, ‘Mice, I want you to go to the palace and ruin all of the Queen’s clothes by biting through the material.’

‘Why should we do that?’ replied the mice. ‘The Queen has done nothing to harm us, and we always get nice food from the palace kitchens.’

By this time the monkey was growing quite angry, and so he went to the cat and said, ‘Aunty Cat, Aunty Cat, I want you to eat the mice because they are not doing as they are told!’

Aunty Cat grew very excited by this news and asked the monkey to show her where the mice were hiding. The monkey pointed towards the mice and Aunty Cat ran to catch and eat them.

Just as Aunty Cat was about to pounce on the mice, they all pleaded at once, ‘Aunty Cat, Aunty Cat, do not eat us! If you want us to, we will go and bite through the Queen’s clothes straight away!’

And so the mice crept into the palace and began nibbling at the edges of the first dress they found hanging in the Queen’s wardrobe.

‘Please don't eat my clothes!’ pleaded the Queen when she found the mice in her wardrobe. ‘I'll go and punish the woodcutter straight away!’

And so the Queen went to see the woodcutter. But just as she was about to punish him, the woodcutter pleaded, ‘Do not punish me, your Majesty! I shall cut this piece of wood straight away!’

Then a very strange thing happened. Just as the woodcutter was about to cut the piece of wood, a little voice cried out, ‘No, no, please don't cut me! I shall open up for you.’ And the piece of wood opened up and released the corn that was stuck in the grain.

Straight away, the greedy monkey reached out and grabbed the last piece of corn and gobbled it up.

But although the monkey had received his last piece of corn in the end, he soon discovered that the woodcutter, and the Queen, and the mice, and even Aunty Cat, were all very angry at him for being so selfish and greedy and for wasting their time and causing trouble.

And that is how the monkey learned that sometimes it is better to leave the last piece of corn and not be so selfish and greedy all of the time.