The Story of Narcissus Mary Smith 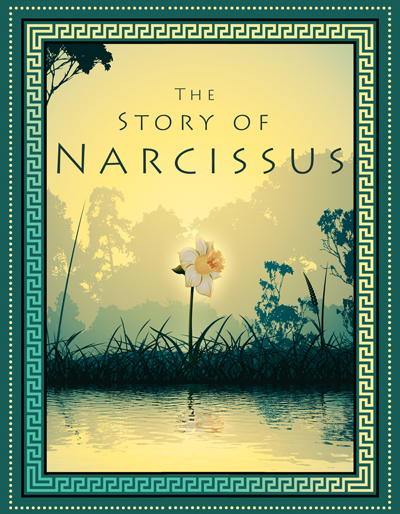 The Story of Narcissus The Story of Narcissus

A tale from the traditional myths and legends
of Ancient Greece

A very very long time ago, the people of Ancient Greece believed many gods and goddesses inhabited their land.

Cephissus, a river god, was married to Liriope, daughter of the ocean. They had a son called Narcissus. In those days, Narcissus was a strong, handsome name and Narcissus himself grew up to be very strong and beautiful.

In Greece at that time, there was a soothsayer called Teiresias who had the gift of foretelling the future. When Teiresias saw Narcissus, he knew that a terrible fate would befall the young man.

Teiresias told Liriope what he believed was going to happen:

‘Oh Liriope, Mother of Narcissus, your son will only live until the moment that he sees himself.’

Liriope was upset to hear this. She wanted her son to live as long as everyone else. She hid all the mirrors in the house and she hung curtains at all the windows so that Narcissus would never see his own reflection.

When Narcissus was grown up, he met a nymph called Echo who fell madly in love with him.

However, Echo could never tell him of her love because the goddess, Hera, had condemned her to repeat only other people’s final words and so she was unable to speak her thoughts.

Narcissus became very fond of Echo. One day he asked her, ‘Are you fond of me?’

How Echo longed to say, ‘Yes, I love you with all of my heart.’

Narcissus was disappointed. ‘All she thinks about is herself,’ he thought.

Their love was destined to fail.

Echo went away; she was very upset.

Narcissus went off to the riverbank so that he could cry where no one could see him.

Eventually, Narcissus stopped crying. He wiped away his tears with the back of his hand. At that moment, he caught sight of his reflection in the smooth waters of the river. He had no idea that he was looking at a reflection of himself.

He saw someone tall and good-looking. He thought that the person he saw was incredibly handsome and he couldn’t stop looking at the image.

The terrible fate foretold by the soothsayer Teiresias had come true.

Narcissus stood for such a long time on the riverbank, staring at his reflection, that the gods turned him into a flower. Narcissus remained in that same spot forever. Even today, we call the tall spring flower, with white petals and an orange centre, a narcissus.