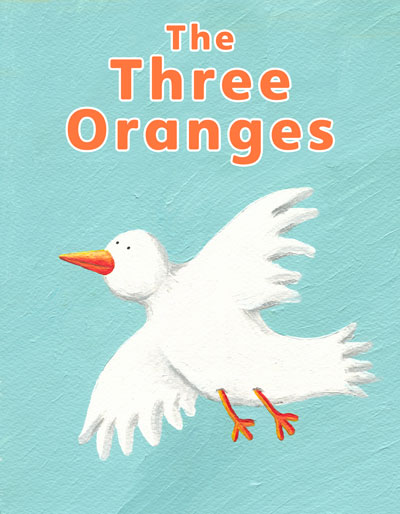 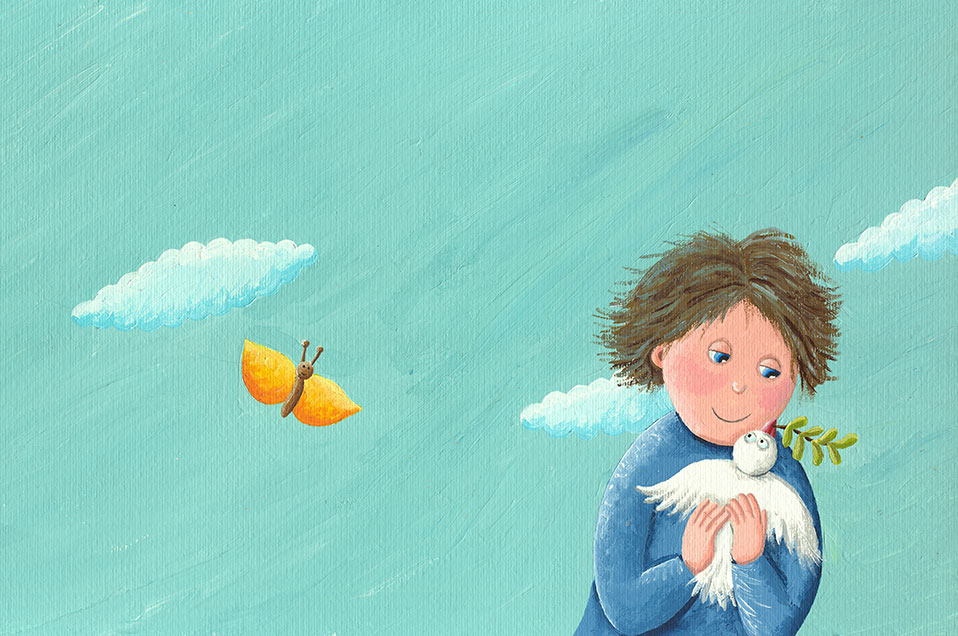 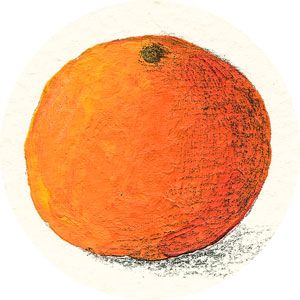 Once upon a time, there was a prince who never laughed nor smiled. Amongst his people he had the reputation of being a sombre young man who always seemed very alone.

One day, a mysterious woman declared, ‘I will make the prince laugh. I will make him laugh and cry, just you see.’

She dressed herself up in rags sewn together with pieces of string and let her hair fall loose down to her shoulders. Then she took a small drum and went to dance in front of the royal palace. Upon hearing the music, the prince appeared on his balcony.

The woman danced and danced with such a singular passion that she did not notice the loose string hanging from her garment. She tripped on the string and fell to the floor in a heap. When he saw the woman fall, the prince burst into fits of uncontrollable laughter.

When she noticed the prince laughing, the woman grew angry and cursed him by saying, ‘May you never laugh again until you find the three oranges!’

The prince suddenly became very silent and felt a deep sadness growing inside him. This sadness continued for many days until he thought to himself, ‘I want to have fun and to laugh once more, so I will look for the three oranges wherever they might be.’

And off he went in search of the three oranges. First he searched all of the neighbouring villages and then he searched further and further afield until he reached the edge of his father’s kingdom.

Early one morning, several weeks into his quest, the prince came across the evil woman who had cursed him. But this time, the woman was wearing beautiful clothes instead of rags and so the prince did not recognise her.

‘Where are you going, young man?’ asked the woman.

‘I am looking for the three oranges,’ he answered.

‘Oh, but they are very far from here,’ said the woman. ‘They are deep inside of a cave on the seashore and they are protected by three fierce dogs. You must travel north until you reach the sea and there you will find the entrance to the cave hidden behind some large rocks.’

The prince thanked the woman and then bought three loaves of bread for his journey.

After many days of travel, he finally reached the rocks and then discovered the cave hidden nearby. Just as the prince was about to enter the cave, a growling dog came charging towards him out of the darkness. Without thinking, he threw the dog his first loaf of bread and kept on walking into the cave.

A second dog was standing close by, its eyes glaring at him from out of the darkness. The prince gave this dog his second loaf of bread and continued walking further and further into the dark cave.

A little further still, the prince came upon a third dog, which was growling and slobbering and looked set to attack. Just as before, the prince offered the animal his last loaf of bread and continued to explore the cave while all three beasts were occupied with their meals.

Finally, the prince walked out of the darkness into a large room. In the middle of the room there was a long table and on that table there were three golden boxes. 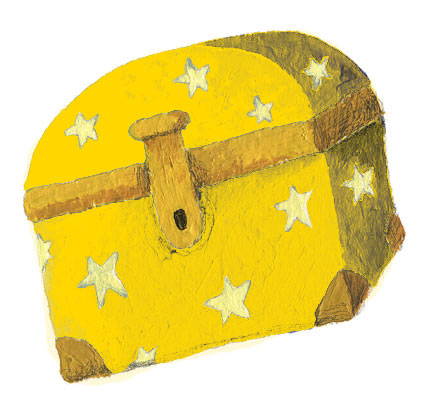 Without wasting any time, the Prince snatched the three boxes from the table and ran out of the cave as fast as his feet would carry him.

After running for many hours, he came to rest in the shade of a tall tree and decided to open the first box. Inside he found an orange and to his surprise it started speaking:

The prince wanted to help but unfortunately he had no water and so the orange soon died.

The prince did not want to make a similar mistake with the second orange and so he decided to continue on his journey. Just as night was falling, he arrived at an inn by the side of the road. He sat down and ordered food, a bottle of wine and a jug of cool water. Only when he was sure that he was prepared did he decide to open the second golden box.

When he opened the box he found a second orange, and just as before this orange spoke to him in a voice full of desperation:

But in his haste, the prince poured wine over the orange instead of water and at once the orange fell silent and died.

The next day, the prince left the inn and continued on his homeward journey. He travelled for many miles until he reached a river at the foot of a tall mountain. It was there that he decided to stop and open the third and final golden box.

Just as before he found an orange inside, and just as before the orange spoke in a voice full of desperation:

‘This time,’ said the prince, ‘you will not die from lack of water.’

Then he threw the golden box into the river so that the orange might drink all the water it needed.

As soon as the box landed in the river, a huge cloud of white smoke appeared in the air all around. As soon as the smoke cleared there appeared a young princess more beautiful than the sun!

The couple embraced one another and instantly fell in love. Then, without hesitation, they made their way to the nearest village where they were married the very next day.

The prince and princess were very happy and soon a son was born to complete their little family. The prince said, ‘We must visit the royal palace, as I have not sent news to my father the king and it has been almost a year since I set out on my quest.’

Thus, the young couple set out on their long journey back to the palace. When they were close the prince asked his wife to rest by a water fountain while he announced their arrival to the king.

As soon as the prince was gone, the evil woman appeared before the innocent wife and child.

‘You have a very beautiful son, princess,’ said the woman. ‘Let me hold him so that you might better rest.’

The princess agreed and the woman took the baby in her arms. Then she said, ‘You have very beautiful hair, princess. Let me comb it for you so that you might look your best when you meet the king.’

Once again the grateful princess agreed. But as the woman was combing the princess’ hair she stuck a silver pin into the back of her neck and the poor princess was instantly transformed into a white dove.

The evil woman, who was in fact a witch, then assumed the appearance of the beautiful princess and waited for the prince to return.

‘It seems as if your ... your face has changed, my dear,’ said the prince when he finally returned. ‘Is there not also something about your person that is different?’

‘It is only the sun that has tanned my skin during our long journey,’ replied the witch. ‘I am sure it will fade in time. And if I seem different it is only because I am tired.’

The prince was fooled by the evil witch and so took her and his son to the royal palace, unawares that his precious wife had been turned into a dove.

Life in the royal palace went on for some time and the witch continued to fool the prince into thinking that she was his beautiful wife. But she had not fooled him completely, for the prince did not feel quite as he had done about his wife and was convinced in the back of his mind that something was not right.

One day, the old king passed away and it was the turn of the prince to become king and rule the lands.

In the palace gardens a dove began to appear, and after many months this dove began to speak to the gardener. Each day the dove would enquire about the king and his young son. The gardener would tell the dove all that he knew and confessed that the little prince was not a happy child and the king not a happy man. 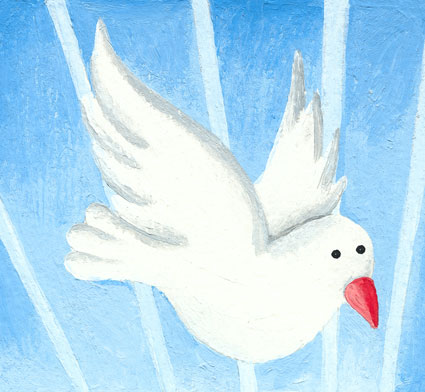 ‘The poor young prince,’ said the dove, ‘darling of his cursed mother who is forced to live alone in the mountains as this bird you see before you.’

The gardener was most taken by the dove and one day reported its presence to the king. When he heard about the bird, the king commanded the gardener to catch the unusual creature and give it to the young prince as a companion.

The gardener did as he was instructed and the prince received the dove and played with the magical creature for many happy days. It seemed to all in the palace that the young prince was finally growing into a happy child and it was agreed that this change of mood was due entirely to the little dove.

One day, the little prince noticed that the dove had a silver pin stuck in the back of its neck. He reached out and pulled the pin and instantly the dove was transformed back into the beautiful princess. The young prince was scared and cried out in fear, but the princess, freed at last from the curse of the evil witch, spoke softly to the child. ‘Do not cry, my son,’ said the beautiful princess, ‘for I am your mother and you have released me from my curse.’

Upon hearing his son cry out in fear the king entered the room and instantly recognised his one true love.

‘You have returned to me, my love,’ said the king as he embraced the beautiful princess.

The princess explained how it was that the evil witch had tricked her and turned her into a dove. The king grew angry and ordered the impostor queen to be imprisoned in the dungeons forever so that she might never again do any harm.

United once more, the king and his true queen lived happily ever after for many, many years. The kingdom flourished and the royal palace was forever full of love and laughter.