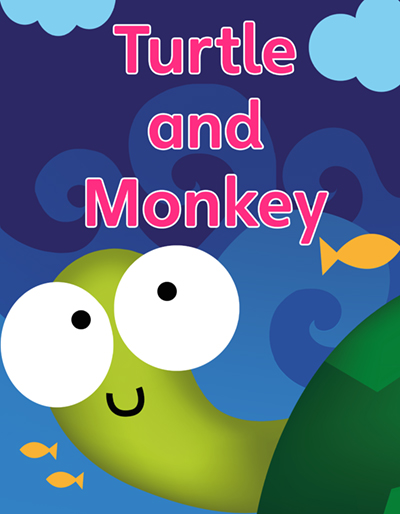 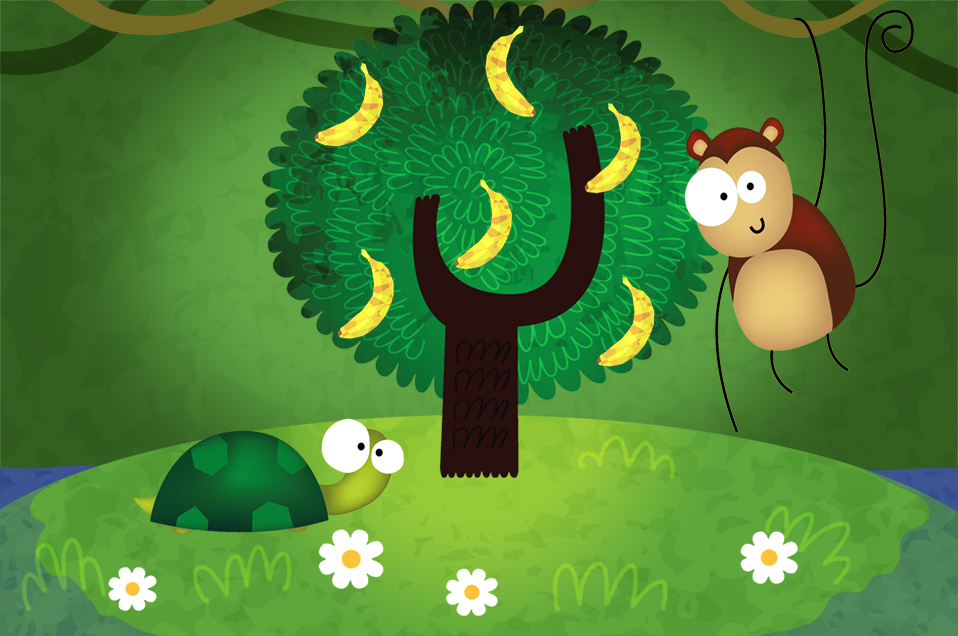 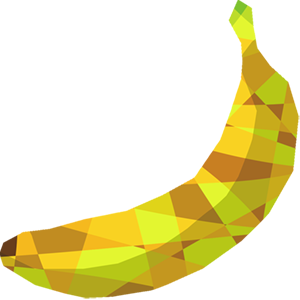 Monkey stood at the edge of the river and watched Turtle swimming against the torrent with a tree that he had caught in the flood; a young tree.

‘Oh, Monkey, I have caught a banana tree. Monkey, will you help me to drag it to the clearing and plant it? It will grow and there will be sweet bananas.’

Turtle pulled the tree by its heavy end – the roots and the trunk – across the ground. Monkey carried just a couple of green fronds from the top end of the tree.

When Turtle wasn’t looking, Monkey jumped onto the fronds.

Monkey nimble. Monkey quick. Monkey play a monkey trick – and was pulled along by Turtle to the clearing.

Turtle made a hole. He pulled the tree down into the hole and pressed the earth down around it.

‘Soon it will grow, Monkey. We will tend the tree together. We will water it. We will weed around it. We will share the bananas.’

‘Share the tree,’ said Monkey. ‘Very well.’ And Monkey climbed half way up the tree, just below where the green fronds grew, and with his strong hands he broke off the top of the tree and ran away with it, laughing.

He pressed his half, the top half, into the damp earth. Soon he would have bananas, he thought.

Turtle tended the bottom half of the tree. There was no green.

Time passed, and the bottom half of the tree began to green up. Fronds appeared and green bananas began to grow.

Monkey, the top half of the tree, the green fronds that wilted and died. There was nothing.

Turtle worked hard around his tree, weeding it and watering it, and now big, long, yellow bananas were hanging down in bunches.

‘Oh, Monkey, won’t you help me? Climb the tree and pick the bananas. I cannot climb the tree.’

Monkey nimble. Monkey quick. Monkey play a monkey trick – up the tree he went to the top, and there he picked one banana and peeled it and ate the delicious fruit. He tossed down the skin so it struck Turtle upon his shell.

Monkey took another banana and ate it, tossing the skin down upon the shell of the Turtle. Banana after banana ...

But Turtle, without Monkey noticing, went and fetched thorns and placed them around the trunk of the banana tree ...

When Monkey had finished and was fat, had eaten all of the yellow bananas, he jumped down from the tree ...

The thorns stuck in the bottom of his feet as he ran. He sat down and he pulled the thorns from his feet and he was full of anger. He ran and quickly, quickly caught Turtle.

‘I am going to carry you to the cliffs and dash you down upon the rocks so your shell breaks! I’m going to take you to the top of the mountain of fire and throw you into the flames!’

Monkey ran, carrying Turtle to the edge of the river, and tossed him high into the air. And Turtle landed with a splash in the deep waters and sank down ... and then rose to the surface.

‘Oh, Monkey, don’t you know that Turtles love to swim in the river.’

But what of the banana tree?

The Turtle and the Monkey did not work together and the tree was grown over with weeds.