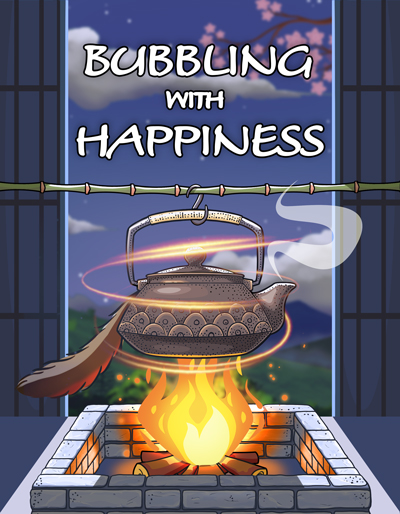 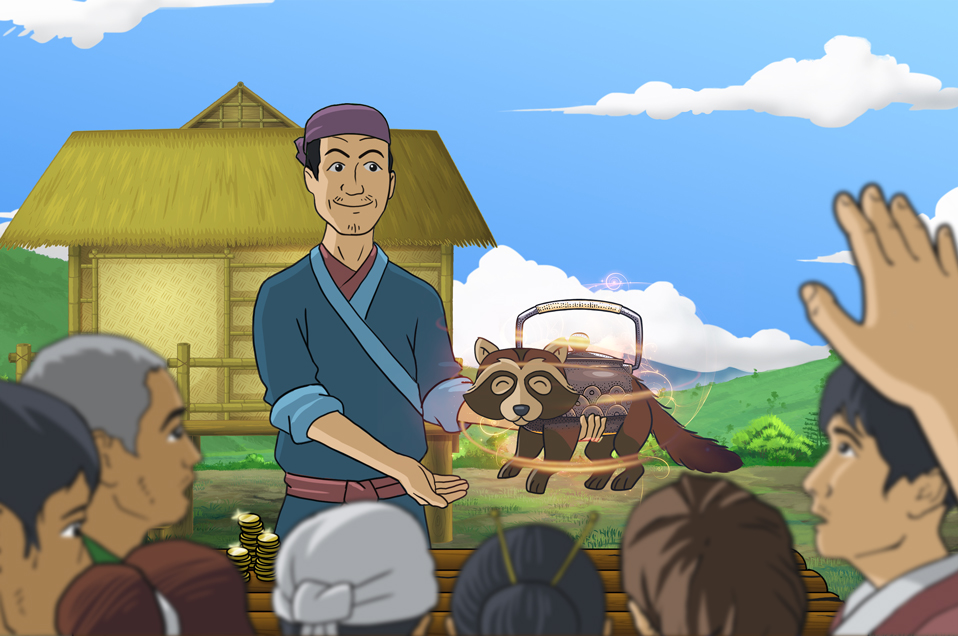 One day, a wealthy man named Akito walked into an old curiosity shop in Japan. Akito was looking for a teapot in which he could make tea. He searched and searched. Eventually, he found a bronze teapot that he liked. He bought the teapot and took it home to use that evening.

Later that day, he cleaned the teapot till it shone like the sun. He put it down to dry and went to count his coins. When he came back, it seemed like the teapot had moved.

‘How strange,’ he thought. ‘There’s no one else here. How could that happen? I must have imagined it.’

He filled the teapot with water and set it over the fire but, as he did so, he heard a strange noise.

He shook his head. It must have been the water boiling.

‘What on earth could it be?’ he said to himself.

‘What a waste of money you were,’ he said to the tanuki. ‘What’s the point of you looking like a teapot if you can’t make my tea.’

Angry at what had happened, Akito chased the poor animal out of his house.

The tanuki scuttled through the door and into the street.

All alone in the cold, the tanuki found a spot near some dustbins and rubbish. He turned back into a teapot for the night to keep himself hidden. He stayed hidden for a few days, thinking about what to do. In the end, the tanuki decided to make his way back to the curiosity shop.

The journey back to the shop was a long one for a small teapot. The tanuki had to take lots of breaks. During one of the breaks, he hid by some bins in the entrance to an alleyway and quickly went to sleep.

That night, a man came into the alley. He saw the light of the moon reflected on something metallic and went to investigate. The man, whose name was Chikara, picked up the little teapot. He looked at it carefully and he noticed that it had very pretty patterns on it. He thought it was a shame that such a nice pot had been abandoned. He decided to take it home to look after it.

Chikara washed the pot. He wiped and polished it and then rested it on a shelf. He went to bed feeling delighted with his find.

In the middle of the night, Chikara woke up to a loud crash.

‘I didn’t mean to wake you,’ he heard. He looked down to the floor and saw his teapot transforming into a tanuki.

‘Hello, little one,’ Chikara exclaimed. ‘I didn’t realise you were a tanuki. I was going to use you to make my tea.’

He asked how the teapot had ended up in the alley where he had found it. The tanuki told the story of the mean rich man. Chikara felt sorry for the little animal and wanted to make him happier.

‘You can stay here if you want. I don’t want you to end up on the street again. You’ll get cold and sick.’

For weeks the two lived happily. The tanuki played in the house with the children. When Chikara was home from work, they would eat and spend their evenings together.

The tanuki was very grateful to the kind man and decided to find a way to repay him. One night, he told Chikara that he had thought of a brilliant plan to make the family rich.

Together, they set up a stand outside the house that advertised the magical shape-shifting teapot. Hundreds of people came to buy tickets to see the fascinating creature. The crowds arrived and watched as a seemingly ordinary teapot turned into a tanuki. They gasped. They couldn’t believe what they were seeing.

One day, after the show, the tanuki thought he saw Akito and remembered how mean he had been. He looked at Chikara, who was talking about how he found the magical teapot. The tanuki felt glad to have been found by such good people.

From that day on, the show became bigger and bigger until Chikara was able to buy a wonderful new house for his family and his new animal friend.