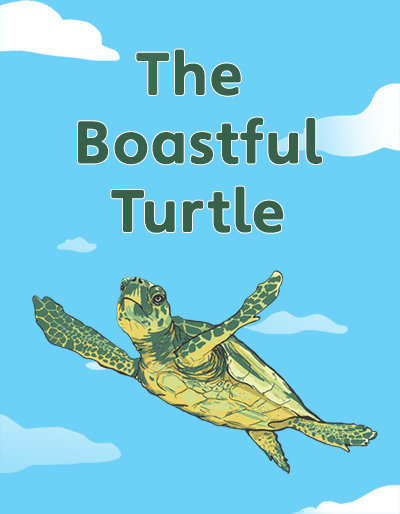 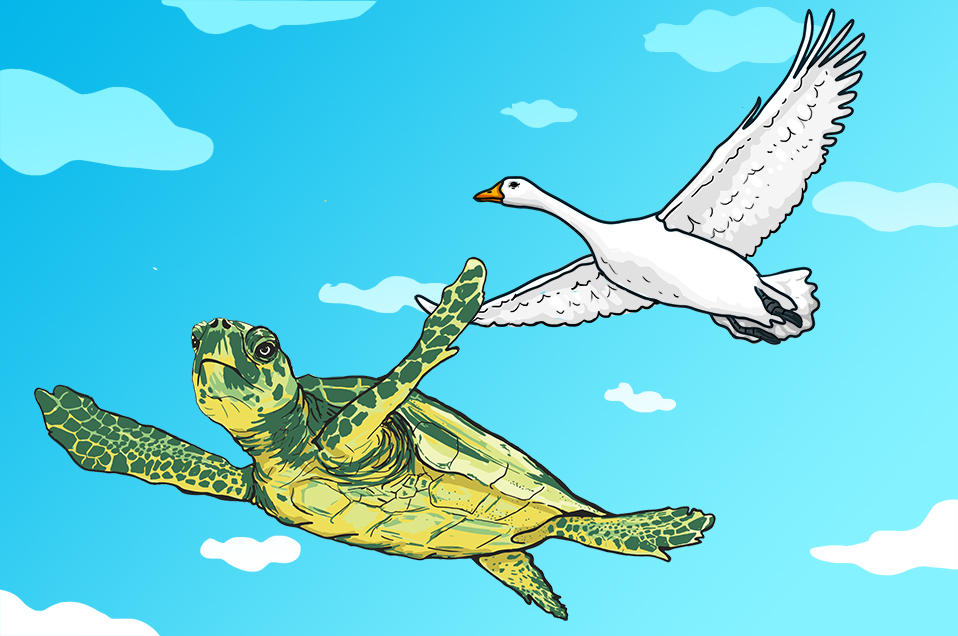 Stories from folklore and fairytales are not always kind, but we view them through a small window where nothing can get in or out. Mistakes are made and lessons learned and there is a moral to be learned. With fairytales as with real life, whether a story is kind or not depends on when you choose to stop reading. It is worth bearing that in mind here …

Some animals are more fortunate than others. The Tamaraw buffalo are strong, the Calamian deer have antlers to fight off predators and the crocodiles of the Agusan marsh are stealthy.

Many would say that birds are the most fortunate creatures of all. Turtle certainly thought so. He was unlike the others. While most turtles are grateful that their flippers mean they can swim in the sea, this turtle moaned that they were not wings. While most turtles know that their hard shells protect them from predators, this turtle felt only a weight on his back that meant he would never be light enough to take to the skies. Flying was all he talked about and he bored the other animals to tears by talking about it all of the time. When he wasn’t talking about flying, he was talking about himself. This particular turtle was not exactly good company.

‘You should be happy with what you’ve got,’ one of the elders told him after he had been on an especially long rant about flying. This elder was a wise and ancient beast with many scars upon his shell and many lines upon his face. The young turtles claimed this elder had once met Bathala, the caretaker of the earth. This had happened many, many years ago when Bathala had first created life. The wise elder would neither confirm nor deny this rumour, but Turtle did not care. All he cared about was flying.

Turtle’s obsession meant that he had few friends. He did not much care for the other turtles who just wanted to swim and eat. And he resented all of the birds because they could fly and he could not. But he knew that if he ever was going to fly, he would need a bird to help him. It was that or ask one of the Monsters of the Philippines, and he was smart enough to know not to interfere with them. The only creatures stupid enough to ask favours of the Aswangs and the Wakwaks were the humans, and those who asked were never seen again.

Instead, Turtle decided to ask a goose. This was long ago you understand, back in the days when animals asked each other questions. He knew that geese were very fussy birds. They were also not particularly bright, and so Turtle thought that he would have no problem getting one to help.

The goose that Turtle chose to approach was, at the time, heading off to meet her flock. She did not relish the thought of trying to teach a turtle how to fly – especially this turtle. It seemed like an awful lot of work.

‘My flock is migrating for the cold season and I am very busy,’ the goose told Turtle. This was partly true, but the goose also hoped to avoid hurting his feelings. After all, everybody knew that turtles could not fly no matter how determined they were.

It was obvious to the goose that the insistent turtle would not take no for an answer.

‘Let me first ask my flock,’ she said, knowing full well what they would say. She could have flown off then and there, but she had either a big heart or a small brain.

The response she got from her flock was just what she expected. The air filled with loud, derisive honks as the geese all laughed at Turtle’s ridiculous demand. Once the laughter had subsided, one goose who was more thoughtful than the others voiced an unconventional idea.

‘If two of us held a strong stick between us,’ he said, ‘then Turtle could hold on while we flew. He does have a strong beak and could surely hold the stick while in flight. He would have to be very careful,’ he added. ‘If he let go, even for a second, he would fall and he would be too heavy for us to catch.’

The goose didn’t fancy this idea very much and hoped that the thought of falling to the ground would be enough to put Turtle off the plan altogether. But, being a very selfish and single minded sort of creature, Turtle was determined to go ahead.

‘Well, just remember to hold on as tightly as you can and never let go,’ said the goose, ‘otherwise you will fall and we will not be able to save you. You look very heavy with that shell of yours.’

‘Yes, yes, of course,’ said Turtle, utterly distracted by his own excitement. He was too busy picturing himself flying with the geese to pay heed to any warnings. He was also busy thinking how jealous his friends would be when they saw him flying high up in the sky above their heads.

And so, with Turtle’s jaw clenched firmly down on the stick held between them, the two geese took off with a whooshing sound and a flapping of their powerful wings. Having never flown before, Turtle was amazed at the myriad of sights that stretched out below him as the geese soared up into the clear blue skies: the beautiful canopy of the jungle, the winding rivers.

Everything he saw only served to prove to Turtle that he had witnessed far too little of the world. But rather than being humbled by the amazing sights all around him, rather than simply enjoy the experience, selfish Turtle wanted to shout out to the animals below. He wanted to brag and boast about what he could see. And he especially wanted to shout down to all of those turtles who told him that he would never fly.

And that was when he opened his mouth.

Remember how I said that stories from folklore and fairytales are not always kind? Well now you see why. Our story ends with Turtle falling but we never see him land. Does he hit the ground? He should. That is how these things work. And if he does … well there is a moral to our story. Can you guess what that moral might be?

But this is folklore and fairytale – a strange place where anything is possible, where there are talking animals who do things they know they should not do. So, for the benefit of this story, maybe he never lands. And in that respect, if Turtle falls for an eternity, doesn’t that mean he’s flying after all?