The Tale of Half-a-Chick Charlotte Scott 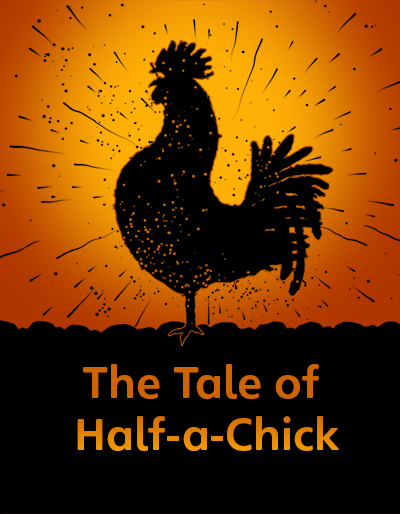 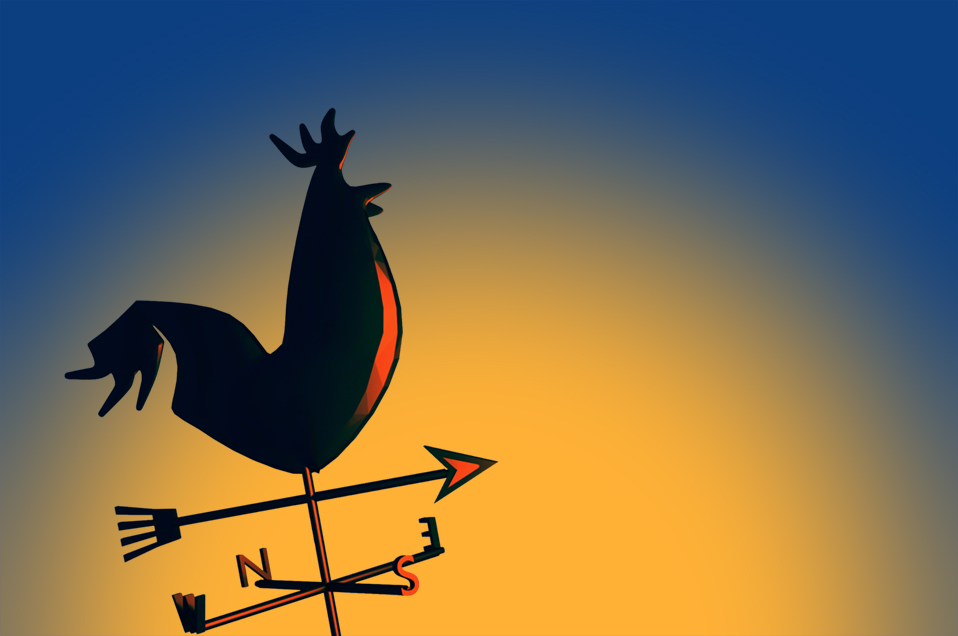 On the rolling fields of La Campiña, very close to beautiful Seville, there once lived a plump red hen who made her home on a large estate full of olive groves and vineyards.

One day, as the sun rose into the clear blue sky, her husband the rooster woke her as usual with his piercing crow.  The red hen felt a familiar tickling feeling beneath her feathers. It was then that she realised that six of her brown eggs had hatched into beautiful fluffy yellow chicks. All but one. The last one to hatch, was very different from the others. He emerged with only one eye, one leg and one wing, and so his mother decided to name him Half-a-Chick. And because he was different, the mother hen looked after him more than the others, and paid him great attention and always made sure that he was safe and happy.

As a result of his mother’s care, Half-a-Chick grew up to be rather spoilt and thought of himself as bigger and better than his brothers and sisters. Although they tried to play with him and include him in all of their games, Half-a-Chick thought that his siblings were simply not good enough for him. He, after all, was special.

As Half-a-Chick grew older, he began to feel that his humble country coop was not good enough for the likes of him, and so he decided to set off for the city. His poor mother worried day and night. She was convinced that people in the city would make fun of her precious son because he was so different from the other roosters, so she tried to convince Half-a-Chick to stay at home where he would be loved and cared for by his family.

‘I am so sorry that you were the last egg I laid,’ she said one day, ‘and I wish I could give you back your missing half to make you whole, but you shouldn't go to the city where you have no friends or family to look after you. You should stay here where you belong.’

But Half-a-Chick wouldn't listen to his mother’s pleading. He was convinced that the city would bring him fame and fortune and that he had no need of his silly, provincial family.

And so he set off towards the city in search of the royal palace so that he could meet the king and queen. ‘Surely,’ the proud little rooster thought to himself, ‘a king and queen are the only suitable companions for someone like me.’

On the morning of his departure, Half-a-Chick’s mother warned him that he must always be kind to others. She also warned him never to talk to chefs as they were a rooster’s worst enemy!

The day was hot and sticky, and it was hard work hopping along the country lanes for mile after mile. And so, late on that first afternoon, Half-a-Chick stopped to take a cooling drink of water from a trickling stream. When he bent to take a drink, the stream whispered to him:

‘Dear friend, I am so weak that I cannot move these twigs out of my way, and I have no power to go around them. Please can you help me by using your strong beak to move them for me so that I might flow on my way?’

The arrogant rooster said: ‘Why should I help you when you are so inconsequential? Now go about your business and do not bother me any more.’

‘One day you will regret your lack of charity,’ replied the stream, its voice full of anger and disappointment.

Half-a-Chick carried on his journey towards the city until he came across a dying breeze lying in the short grass beside the lane. The breeze sent faint swirls of dust up from the lane with its wheezing, weakened breath.

‘Please help me to get up,’ the breeze whispered. ‘I am normally a strong wind that can move waves and bend branches, but I am exhausted by this terrible heat. Can you pick me up with your beak and fling me up into the air so I can blow strongly once more?’

The rooster replied: ‘I have always had a problem with you, wind. You do nothing but ruffle my feathers and make me unstable on my one leg, so no, I will not help you.’

The mighty wind may have been reduced to a breeze but it was still angry with the selfish rooster. ‘One day you will be sorry that you did not do this little thing to help me,’ it whispered. ‘One day you shall pay for your selfishness.’

The young rooster simply shrugged and hopped away up the lane, leaving the breeze to die out all alone.

After another long day on the road, Half-a-Chick came across a dwindling fire in the hay field. He moved closer to the small fire and heard a frail voice coming from the burning embers. ‘I want to be free to roar up into the sky; please put some dry grass on me so that I can be a big flame again. Have pity on me, please.’

Half-a-Chick seemed to think about the request for a moment before he replied in his usual haughty voice: ‘I am no mere farm hand who gathers hay for the likes of you. Now snuff out! I have far more important things to do with my time.’

‘Someday you might need my help,’ replied the tiny flame, ‘but I will remember how unkind you were. I warn you that your selfish attitude will be your downfall.’

Half-a-Chick was so angry at being threatened by such a small flame that he jumped up and down on the hay until the last embers had died and there was nothing but lifeless ash under his foot.

‘That will teach you to talk to me in such a way,’ the proud rooster said to himself as he hopped away towards the city to meet the king and queen.

Half-a-Chick finally arrived in the city of Madrid on the morning of the following day. He brazenly hopped up to the front gates expecting to be welcomed by the king and queen.  Instead he was confronted by a group of soldiers who were guarding the palace.

‘Who goes there?’ barked one of the soldiers. ‘No roosters allowed past this point!’

Although he was frightened by the soldiers, Half-a-Chick was determined not to be defeated. He hopped around to the side of the palace and squeezed his thin frame through a crack in a hidden doorway. Once inside the palace, he hopped down a stairwell into a great big room full of pretty copper plates and bowls that shone like gold in the glimmering firelight. In the centre of the room there were two imposing people wearing white crowns on their heads: one was a man and one was a woman.

‘At last,’ thought Half-a-Chick, ‘this must be the king and queen!’

But before the proud young rooster could take a bow and introduce himself, the king stooped down and grabbed a hold of him by the neck. ‘Who is this that has sneaked into my kitchen,’ boomed the king as he prodded Half-a-Chick in the chest with his long finger. ‘He’ll make a fine roast meal for the king and queen even if he is a bit on the thin side!’

It was then that Half-a-Chick realised his mistake. This was not the king, it was a chef – the worst enemy of them all!

The chef called out: ‘Get a pan of hot water and prepare to de-feather this sneaky little bird!’

Half-a-Chick pleaded with the water inside the pan. ‘Dear friend, please do not scald me!’

But the water bubbled with anger and replied: ‘Did you have pity on me when I asked you to move the twigs for me when I was a mere trickling stream? No you did not. And I will not help you now.’

And so Half-a-Chick was plunged into the hot water and all of his feathers were plucked from his skin. When this was done, the chef placed the young rooster on a baking tray ready for roasting. Once inside the oven, Half-a-Chick pleaded with the flames:

‘Please don’t cook me!’ he cried. But the flame in the oven only grew bigger.

‘Don’t you remember how you stamped out my embers with your foot until I was nothing but ash?’ replied the angry flame. ‘Now it is my turn.’

And with that the angry flame grew even bigger and hotter and cooked Half-a-Chick until he was a burnt and blackened silhouette.

When the chef opened the oven door and discovered the burnt and blackened rooster, he knew that the king would be angry and so he threw the bird out of the window. It was then that the strong wind caught Half-a-Chick and carried him high up into the air.

‘I’ve already suffered enough!’ cried the plucked and blackened rooster. ‘Please let me down so I can go back to my family!’

But the wind replied: ‘Who left me to die out on the hot road and would not even give me a lift with his beak? Is your memory so short?’

The wind carried the helpless rooster high up towards the palace roof and there he planted him on the tallest turret where he became fixed like a weathercock.

For the rest of his days, Half-a-Chick paid for his selfish attitude towards others. He remained on top of that turret, trapped and alone, always at the mercy of the wind and the rain and the burning sun, forever spinning around and around and around.