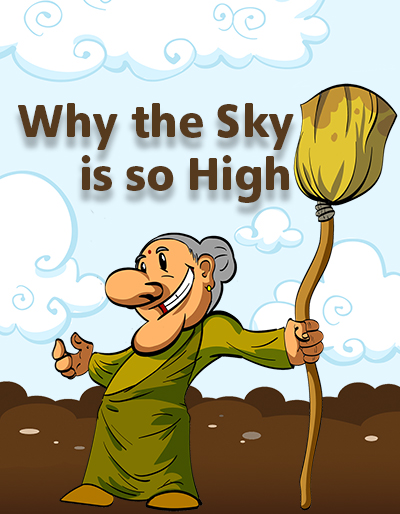 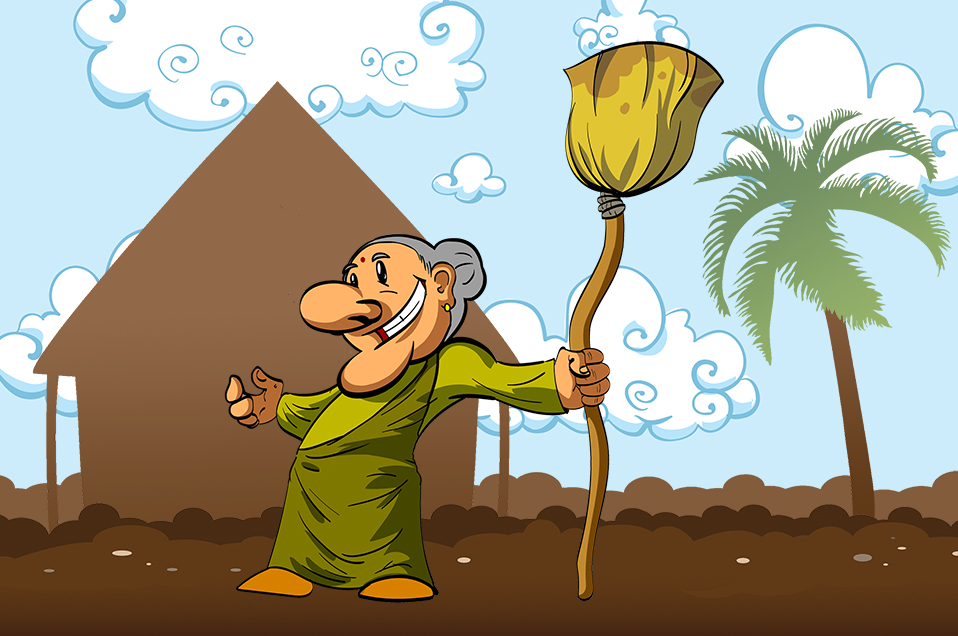 Many years ago, the sky was so low that if you reached up you could touch it with your fingers.  And in northern India where the sky was lowest there was a village where a very old woman lived in a tiny mud hut.

This little old woman lived all alone as she had no friends or family left. She had nowhere to go and no one to talk to. So to keep herself busy, she spent all her time cleaning her house and yard.

One hot summer when the monsoon had not yet come, the soil was so dry that there was dust everywhere: on the trees, on the roofs of huts and houses and in the air. People coughed and sneezed and choked because the dust got into their noses and throats. Even the poor sky suffered; it was so near the ground that when the dust rose, it coughed and sneezed as well.

The old woman's hut was covered with dust. She swept and swept the little hut with her broom. She even swept the outside of her hut and her front yard. But the more she swept, the more the dust swirled around her.

The sky began to choke with all the dust that the old woman was causing with her sweeping. The dust got into its throat and tickled its nose and made it sneeze – a great big sneeze that shook the world with its thunder. People covered their heads and ran indoors in fright. But the old woman kept on sweeping.

The dust got into the sky’s eyes and made them water so that huge drops of rain began falling onto the dry earth. The old woman barely noticed until a huge raindrop fell on her head.

The old woman glared at the sky and scrubbed the raindrop away. But then another raindrop fell, and another, until her lovely clean yard was covered in raindrops.

This made the old woman very angry. She shouted at the sky, yelling at it to stop raining on her nice clean yard.

But the poor old sky couldn't stop raining; its eyes were so full of dust.

At last, the old woman was so angry, that she picked up her broom and hit the sky with it. The sky gave another huge sneeze and jumped out of her way. But the old woman kept hitting it with her broom, over and over again.

Finally, the sky had had enough of the dust and being hit by the old woman’s broom. Sneezing and coughing, thundering and raining, the sky flew higher and higher until the dust couldn’t reach it and swore never to come down again.

And that is why the sky is so high. Even where it looks as though it touches the earth, the sky is really very high, out of the reach of angry old women with brooms!