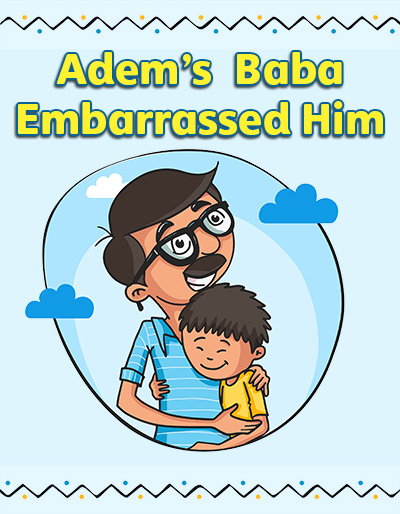 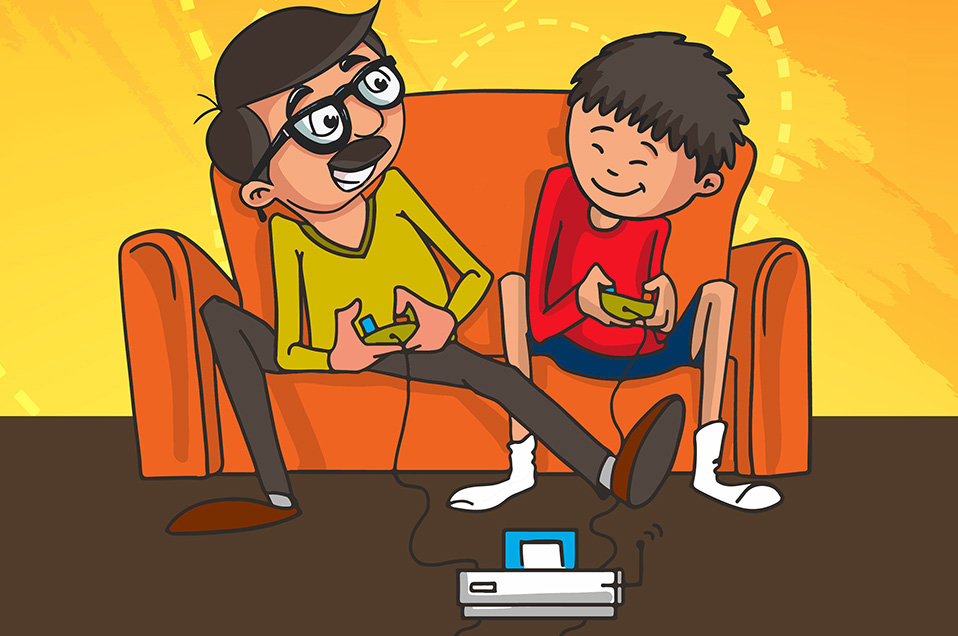 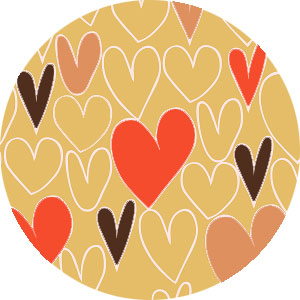 No, no. His name is not Adam. It is ‘Adem’. That’s right, there is an ‘e’ instead of an ‘a’ just before the last letter ‘m’. Adem is a Turkish name. Both Adam and Adem mean ‘the first man in the world.’

Adem is a curious boy who loves reading. He reads all kinds of story books. He also reads The Guinness Book of World Records. This is his favourite.

The young boy loves to talk about the things he reads in the book of records. If Adem were here now, he would already be talking about Sultan Kosen of Turkey who is eight foot and one inch tall. Sultan Kosen is the tallest living man in the Guinness world book of records!

Hey look! Here is Adem coming out from school with his two best friends, Ben and Jonathan. Adem is the one with dark hair, olive skin and beautiful blue eyes. You cannot miss him because Ben and Jonathan are both blond boys with fair skin.

Adem’s father is Turkish and his mother is English. He got his looks from his father, but his eyes are the same colour as his mother’s.

Adem hears someone say ‘Merhaba’. He turns around and waves at his Turkish friend, Metin. Then Adem replies by saying, ‘Merhaba!’ This word means hello in Turkish. The first Turkish word Adem ever learnt to say was ‘Baba’. It means Dad. 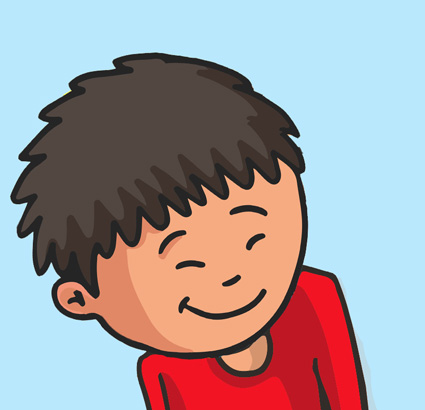 One day, when Adem was a little boy, he asked his Baba, ‘Am I English or Turkish, or am I half of each?’

His Baba thought about this question for a moment, then answered, ‘You are not half of anything, my son. You are both full Turkish and full English.’

Adem liked this answer very much.

Sometime later, Adem got his face painted with an English flag while he was at the carnival. When his Baba saw Adem’s face he was really quite shocked, but Adem said, ‘It is OK, Baba. Don’t you remember, I am full English as well as full Turkish.’

Adem gives a high five to Ben and Jonathan and then approaches us and walks beside us along the pavement. He smiles up at us. ‘Did you know that in June 2003 a Turkish man called Muhammed Rashid entered the Guinness Book of World Records with his moustache that was over five feet long! That is a very long moustache,’ says Adem, his smile becoming even bigger. ‘My Baba has a big moustache too, and bushy eyebrows. But his moustache is not as big as five feet, thank Allah!’

Adem says ‘Allah’ instead of God, because Adem is a Muslim boy.

Adem notices a man walking in the street with a dark blue velvet Kippah. ‘A Kippah is a Jewish hat,’ says Adem, just so we know.

Then the young boy notices a Sikh man wearing a traditional Turban. Adem loves this variety of different cultures walking along the same street.

‘My Baba owns a restaurant,’ Adem tells us. He looks at us directly with his serious eyes, as if he is teaching us something very important. ‘It is not a kebab restaurant. In my Baba’s restaurant they make vegetarian stew and serve it with special bread called Pide bread. It is very tasty.’

Adem’s Baba has a favourite food. It is called Okra. Okra is a vegetable that tastes a bit like a pickle. Adem’s Baba puts lemon on the Okra because he says it makes the vegetable taste extra special!

‘I really like kebab,’ Adem tells us. ‘I know it is not very healthy, but it tastes really good.’ 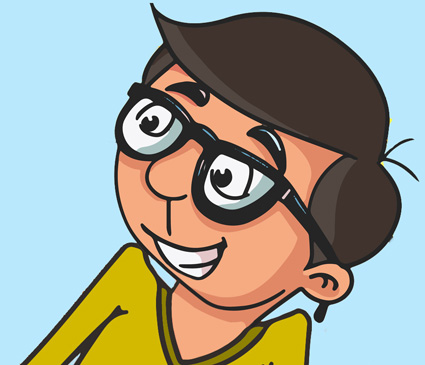 Suddenly, the young boy looks a little uncomfortable, as if there is something he wants to tell us. He seems to concentrate, formulating the words inside his head.

‘Every Thursday,’ he says after a moment’s silence, ‘my Baba comes and picks me up. I don’t like Thursdays anymore. There is something about my Baba that embarrasses me. I want to talk to him about it, but I love him and don’t want to hurt his feelings. It’s not always easy to talk to parents, you know.

For example, last Saturday after we had been swimming, I bought a really nice chocolate cake and my friend Ben and my Baba were with me in a café. I was eating my cake when my Baba whispers in my ear that I have to give some of my cake to my friend Ben. Baba said that this is a custom in Turkish culture. It took me ages to whisper back and explain to my Baba that in English culture it is rude to offer my friend half-eaten cake as I know he has some money in his pocket, and if he wanted to have some cake he would buy some for himself.’

Adem explains to us that his Baba has lived in England for a very long time, but he still does not have many English friends. The young boy says it is as if his father still lives as he used to live in Turkey. ‘That is okay,’ Adem tells us, ‘but it is sometimes difficult for me to understand some of the Turkish traditions, and there are so many of them to remember.’

Adem has almost arrived at the meeting point where his Baba has told him to wait to be picked up after school.

Today is a Thursday.

He looks a little bit nervous as he scans the street. ‘I have tried to do something about this embarrassment,’ he informs us earnestly, ‘but it has not worked yet. I do not know how to talk to my Baba about the way he acts when we are with my friends.’

Adem stops on the corner. He still looks a bit nervous. ‘This is where my Baba picks me up,’ he says.

There are lots of children from Adem’s school standing about on the corner: some waiting to be picked up by their parents, some heading for the bus or walking home in pairs. Adem pretends to be reading his book. He doesn’t want any of his friends to be near him when his Baba picks him up.

This is when Adem notices Emily. Emily is beautiful. She has blonde hair and blue eyes and Adem has fancied her ever since they were both in year five.

One day, Adem’s history teacher placed all of the children in pairs for a school project. Adem was placed with Emily. The children had to make a Motte and Bailey castle. The best castle would win a prize.

So Adem and Emily spent a lot of time together and worked really hard on their castle. Then, when the judging day came, THEY WON! And that’s when the fancying began, because Emily hugged Adem. From that moment to this, whenever Adem sees Emily, he feels a warm feeling inside.

Emily is approaching the corner where Adem is waiting for Baba to come pick him up. Adem looks very uncomfortable all of a sudden.

Adem quickly sits on the floor and pretends to tie his shoelaces while attempting to hide from his Baba and from Emily. But it is no use; the young boy can tell that his Baba has spotted him. The jeep pulls up to the kerb and Adem’s Baba steps out. Meanwhile, Emily is getting closer and closer, and now she can see Adem and his Baba together next to the jeep.

Adem stands up now and his Baba grabs a hold of him and gives him a big cuddle and a kiss.

‘Come on Adem,’ says his Baba in a cheerful voice, ‘won’t you give me a kiss!’

Adem looks around, then quickly kisses his father on the cheek and jumps inside the jeep before Emily gets any closer and laughs at him for kissing and hugging his father when Adem is a big boy now and should be more grown-up.

Father and son do not talk to each other for a couple of minutes as they drive through the busy streets heading for home.

Baba looks at Adem and asks again, ‘Are you OK, my son?’

‘Yes,’ says Adem, but his voice is not very convincing.

Adem’s Baba knows that his son is not happy because he knows him very well and they are very close. ‘Come on,’ he says, ‘why don’t you tell me what is wrong?’

Adem thinks for a little while. He knows what to say, but he does not want to hurt his Baba’s feelings. Eventually, the young boy summons up the courage to speak his mind.

‘Baba, there is something I need to tell you, something that upsets me. There is a person who upsets me. That person is …’ Adem pauses for a moment, unsure how to continue.

‘Someone has upset you! Tell me who it is.’ Baba says to his son.

‘Is it someone at school, a teacher, a friend, a bully?’ asks Baba, clearly concerned for his son.

There is another long silence as Baba steers the jeep through the village towards home.

Adem takes a deep breath, then says, ‘It is you, Baba. You upset me.’

Adem does not say anything, so Baba pulls the jeep into the kerb and switches off the engine so that he can talk properly to his son. ‘Tell me what did I do, Adem?’

Adem looks at his Baba, at his big bushy eyebrows and the lines that crease his forehead and make him look like he is angry. Adem knows that his father is not angry but upset. He feels bad that he has made his Baba sad, but he plucks up all of his courage and tries to explain himself.

‘You know that I am eleven now,’ he tells his Baba, ‘and that I am very grown-up.’

‘Yes, definitely,’ says his Baba with a touch of pride in his voice.

‘So … you do not want me to kiss and cuddle you anymore, is that it?’

‘No, no, Baba. I like it when you cuddle me, but I don’t want you to kiss and cuddle me in front of my friends because I am too old for that now and they will laugh at me.’

‘It is a very Turkish thing to do, I suppose,’ admits Baba as he starts up the jeep and steers through the evening traffic. He looks a little sad and Adem wants to cheer him up.

‘Shall I make a cup of tea for you and mummy when we get home?’

Baba smiles at his precious son. ‘That would be lovely, Adem. But please do not put any milk in my tea. You know I like it black. This is the Turkish way to have tea and the Turkish way is best for me.’ His Baba winks at Adem as he says these words.

‘Can we play a game tonight?’ asks Adem as the jeep rounds the final bend towards home.

Baba does not look upset anymore and reaches over and ruffles Adem’s hair and waves a finger at his son. ‘We can play a game tonight as long as you don’t cheat like you did last night.’

Baba and Adem both laugh at this and continue talking about Adem’s day at school and all of the things he did and all the facts he has memorised from his Guinness Book of World Records.

And that was the last time that Baba embarrassed Adem in front of his friends.

But whenever they are playing together at home, Baba will often grab his son and wrap his big arms around him and tease him that he is never be too big for a cuddle.