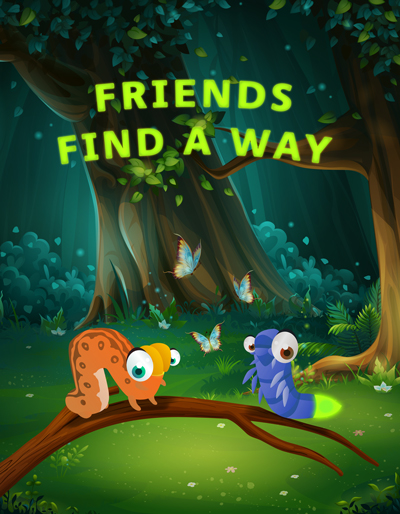 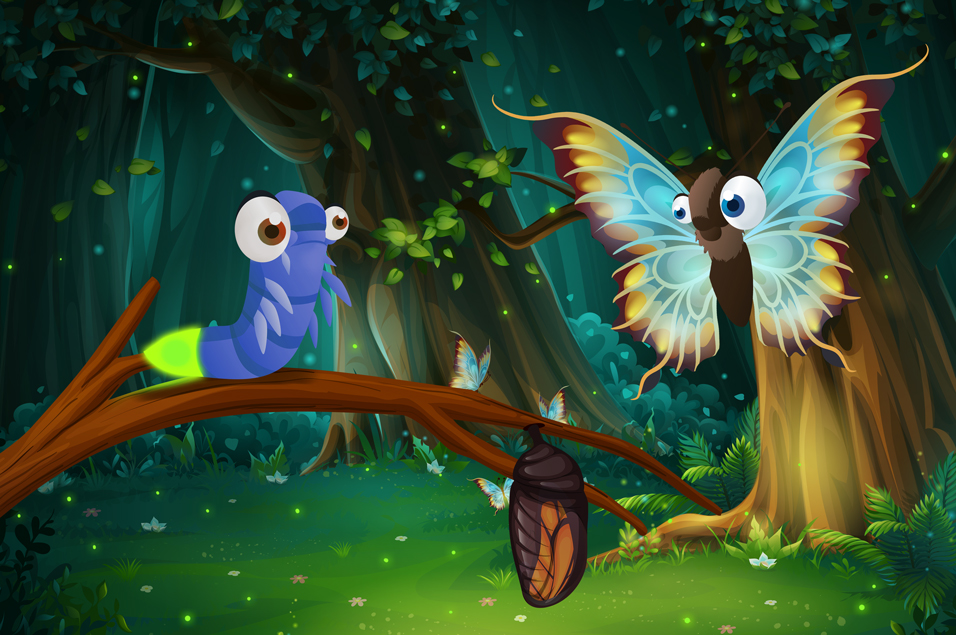 In a dark, dense forest in New Zealand, there lived a little grub called Aaron.

He was white and small and moved by wiggling his body. Best of all, he shared a twig with his best friend Chris.

Chris was also a grub.

In some ways they were different. Chris ate a lot of leaves. Aaron didn’t really like leaves.

He didn’t like sleeping at night either, but that’s when Chris slept so Aaron did the same. Best friends do everything together.

During the day they played their favourite game; racing to the end of a twig, laughing all the way.

‘I feel a little stiff today,’ he yawned.

Aaron tried to tempt Chris up the twig with his favourite leaf but Chris said he was tired.

The afternoon became dark. Heavy raindrops began to fall. Soon the whole forest sounded like it was whispering in the rain.

‘Chris! Did you see that? I saw lightning!’ said Aaron.

He turned to his friend but something was wrong. Chris’s skin had turned hard like a shell.

Aaron poked him but he didn’t move.

‘Chris?’ he cried. Aaron heard a sleepy snore from deep within the shell.

Even the crashing thunder didn’t stir his friend.

Aaron’s heart raced but he tried to be brave.

‘Chris, you are my best friend,’ he cried. ‘I am going to stand by you, until you become well again.’

Aaron didn’t move all night. In the morning, he brought Chris his favourite leaf, but still he slept.

Without Chris to follow, Aaron started to eat little bugs instead of leaves. To his surprise, he found them quite tasty.

Soon, Aaron grew very strong. He started staying up later too. On a clear night, he could see the Southern Cross.

He loved it, although he missed his friend.

Two trees away, a little light winked at him like a star. Soon there was another and another. He peered a little harder and froze.

Was that a voice?

The next morning, Aaron woke up with a start. The shell was moving! It creaked and cracked. Before long, something very different sat in its place.

Chris giggled. ‘I need to stretch my wings!’

And with that, he fluttered away.

Aaron watched his friend go and a funny feeling grew in his tummy. He couldn’t follow. All he could do was race to the top of the twig.

Would Chris ever want to race to the top of the twig again?

The funny feeling stretched into his throat and he began to cry.

He cried and cried until it was dark and he had no more tears.

‘Are you ok?’ called a voice in the darkness.

Aaron stopped. The little lights were back. He swallowed and stood very still. He didn’t want to be seen.

Suddenly, he felt a poke on his back and he jumped.

Aaron relaxed. It was his friend. ‘Chris, I’m so glad to see you! How did you find me in the dark? I heard a voice out there and I’ve been keeping still to hide.’

Chris smiled. ‘Aaron, don’t you know? You’re glowing! I saw you from the edge of the forest. You’re a glow worm!’

‘That’s right!’ said Chris. ‘And there are more glow worms in that tree over there. They’ve been trying to call to you. They want to be friends!’

Aaron laughed but then he remembered why he was sad.

‘Chris, if you’re a butterfly and I’m a glow worm, can we still be friends? Butterflies have wings and glow worms have threads. You wake up at dawn and I wake up at dusk. How will it work?’

‘Of course we can, silly,’ said Chris. ‘We will always be friends. Friends find a way.’

From that day on, at every dawn and every dusk, Chris and Aaron raced to the top of their twig, laughing all the way.