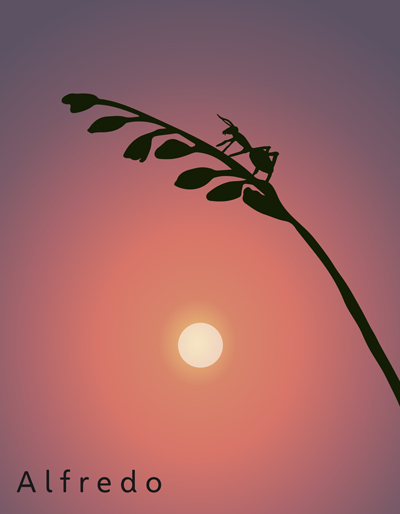 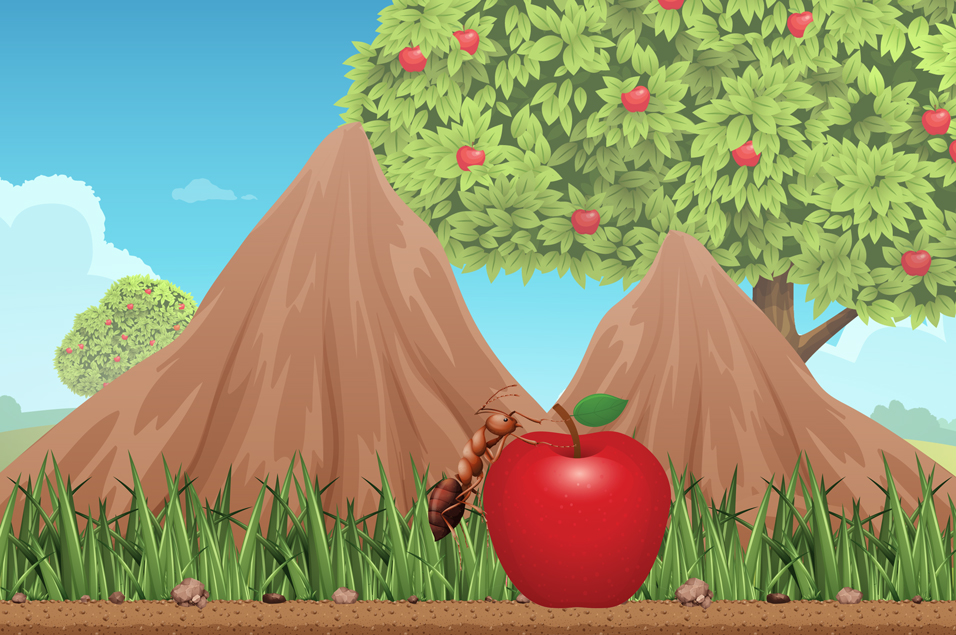 Ants don’t have ears or noses, and even though they have mouths, they cannot speak. Instead, they have two long feelers on their head called antennae. These antennae are fantastic little tools that are very important in an ant’s daily life. Ants use them to pick up smells, to feel vibrations through the ground and to communicate with others.

Ants hardly ever sleep. Instead, they have little ‘power naps’ that last only a few minutes at a time.

These little rests were the best part of the day for Alfredo. It was during his naps that he felt truly relaxed, without having to worry about work.

There is something important that you need to know about ants: in each nest, there is a queen ant, there are finder ants, and there are follower ants.

Finder ants find different foods, and they can make trails that have a very strong and powerful smell. The follower ants then use their antennae to follow the smell trail to harvest the food. Whatever food they find is collected and brought back to the nest.

It’s funny because a finder ant never knows what it is going to get when collecting food. The size, weight and location of the food are completely random. This meant that Alfredo had to walk a lot; usually around 5,000 metres a day. That’s the equivalent of a human running three marathons – every single day!

In Alfredo’s nest, finder ants were popular. Their glorious reputations meant that followers wanted to be just like them. Finders got special treatment; they were allowed more time to relax and given better food to eat. All this extra food meant that finders grew much bigger and stronger than the followers. Sometimes this was bad because it made the finders extremely bossy. Often, they thought they were better than everyone else and could do whatever they wanted.

Nevertheless, Alfredo wanted to be the ant that found the biggest and juiciest bits of food. He dreamed of finding a fresh and plump red apple, untouched by anyone or anything. He dreamed of sinking his jaws into that apple and only stopping eating once his belly was fit to burst.

Apples were Alfredo’s favourite food. He loved that they are juicy, crunchy, delicious and full of sweet sugar. Eating apples always gave him an extra energy boost.

Alfredo daydreamed a lot. He would daydream about being the most successful and famous finder in the colony. He would dream about having jaws 20 times bigger so that he could gobble up five or six mouth-watering apples in one big bite. The idea alone made him smile from ear to ear. He loved these thoughts and ideas so much that he would even daydream about the relaxing times in which he could daydream!

One day, during one of his short power naps, Alfredo had a daydream that would change his life forever. It was a truly magical, yet terrifying idea.

For Alfredo, the colony had been his world. It had been the only life he had known for all of the eight years, four months, and 13 days that he had been alive. But suddenly, Alfredo came to a crucial realisation.

‘I have become so focussed on what was happening in my little world,’ he thought. ‘I completely forgot about the rest of the world out there.’

For his entire life, Alfredo’s purpose had been to make other ants happy. The queen and the finders would fill their bellies with the food the followers had carried back to the nest, leaving only scraps for Alfredo.

‘Who said it had to be this way?’ pondered Alfredo. ‘If I want to find the biggest, crunchiest, juiciest apple, why don’t I … just do it?’

That was the first time in his life that he realised that his happiness should come first. He was halfway through his life, and if he didn’t act now, he would only be wasting time being miserable and bored. Alfredo was determined to leave the nest behind and follow his dream.

So, with a head buzzing with excitement and a stomach full of butterflies, Alfredo set off on his adventure. He left the entrance of the nest as if he were going to work. Instead of following a trail, as he would at work, Alfredo changed direction. Unlike a finder ant, he did not leave a trail behind him.

‘I must be crazy!’ thought Alfredo. Without looking back, he headed towards a cluster of trees in the distance. Alfredo realised that the pursuit of happiness is the only thing that makes life worth living.