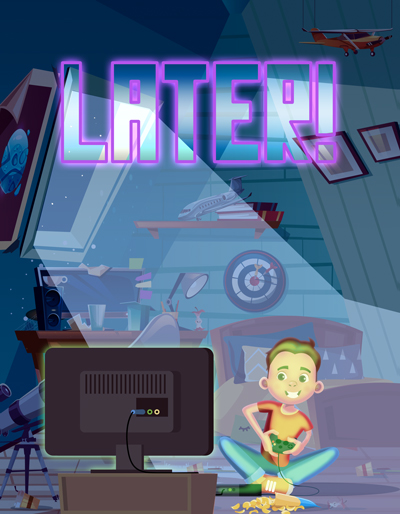 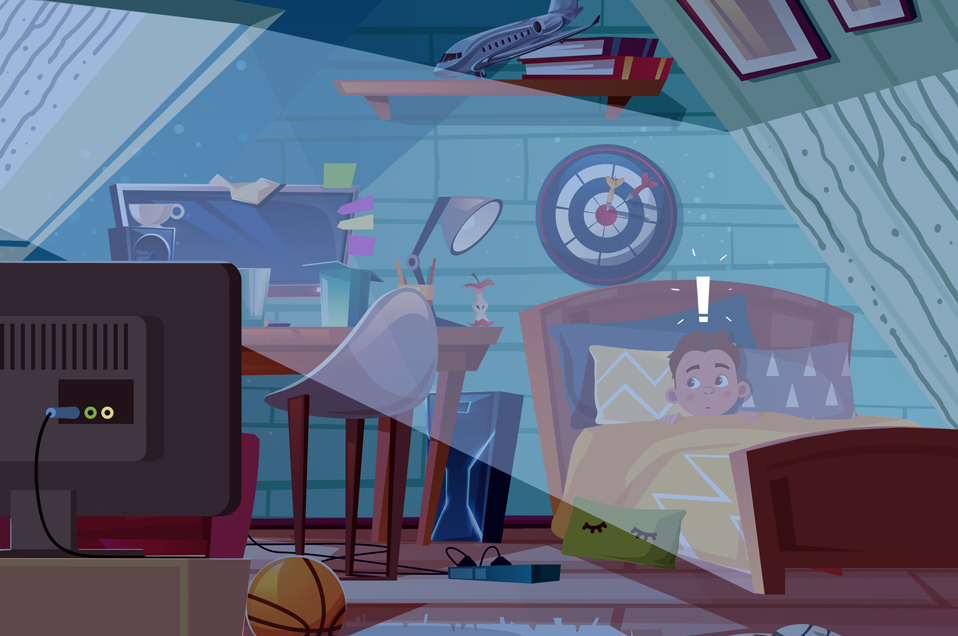 Every day Oscar would do everything his way. Oscar would eat what he wanted, play the games he wanted whenever he liked and sleep whenever he wanted. If his mother asked him to clean up after himself or to come down for dinner, he would shout ‘later!’ and continue with whatever he was doing.

One day, Oscar came home late from school after playing out with his best friends in the park.

‘I’m home!’ He yawned into the hallway. He was exhausted after playing all afternoon.

Oscar went off to do the next thing that was on his daily list. He grabbed an armful of snacks from the cupboard and then played video games until the sun had set. The room around him started to grow extremely dark. The only light came from the TV, which gave off a racket.

‘Oh, come on!’ Oscar slapped the controller down on the sofa. He grabbed a handful of crisps. Half of them crumbled to pieces before they had even reached his mouth.

‘Give me a chance here!” He exclaimed to his friends in the game. They responded with loud grumbles.

‘Oscar!’ his mother shouted from the kitchen.

‘Guys come over here!’ he shouted at the screen.

She had shouted louder this time, and she sounded a little tired.

‘Yeah?!’ Oscar whipped off his headset.

Oscar rolled his eyes as he popped his headset back on and settled himself on the sofa.

‘Later!’ he called back.

Later came, and Oscar’s mother walked into his room. She carried a plate of food for his dinner. She stopped suddenly just inside the door.

‘Oscar, can you please clean up this mess?’

The more Oscar had eaten, the more crumbs had scattered around him. He was surrounded by leftover wrappers and empty packages collected on the sofa.

Oscar frowned at his mother.

‘Later!’ he shouted, over the noise of the video game.

His mother let out a sigh as she began to clean up the mess.

The next day, Oscar came home angry and frustrated because he had struggled with a test at school. He decided to treat himself to some cake.

Just as Oscar was about to take the first bite, his mother called him from the other room. He sighed, dropped his cake and stropped off to talk to his mother.

She looked stern. Her arms were folded. The envelope Oscar had just brought home was ripped open, and a letter was in her hand.

‘Oscar, we need to talk about something that happened in school.’

She pointed for him to sit next to her.

Oscar gulped and sat down. He thought he knew what was coming.

‘Oscar, I’ve read this letter from your teacher. She says you’ve been cheating on your tests and copying your friend’s work.’

Oscar grew angry all of a sudden. He only copied because he didn’t understand any of it.

‘Well, he lets me copy him!’ He gave a huffy sigh and folded his arms.

His mother sighed as well but then gave him a small smile.

Oscar was tired and fed up. First, his teacher told him off to his mother and then his mother took his teacher’s side! Why couldn’t she just stay out of it?

He jumped to his feet. His hands clenched by his sides.

‘Later!’ he exclaimed. He ran off to his bedroom.

Later that night, Oscar grumbled as he tossed and turned from side to side in his bed. He couldn’t get to sleep.

Why did everyone need him to do everything all the time? Why wouldn’t they let him do what he wanted? He wished that everyone would get off his back. He promised himself that he would do everything for himself in future, even if it meant cheating on tests.

That night, Oscar dreamed of eating his favourite snacks and playing in the park with his best friends all day long.

The next morning, Oscar was shocked from a sound sleep. A thunderstorm raged outside his window. The rain slapped heavily against the glass.

‘Mum?’ Oscar called out to the quiet house.

He ran downstairs, but no one was there. Oscar simply shrugged, sometimes his mother would be called into work last minute. She would usually leave a note to let him know that she had made his favourite breakfast and wrapped it up on the counter. He looked everywhere, but there was no note or breakfast to be found.

‘Oh well,’ Oscar said aloud to himself. He grabbed his favourite snacks for breakfast.

Oscar grudgingly went off to school, remembering that he had to face yet another test that day. When he got to class, he realised that the friend he usually copied from was nowhere around. He had not told Oscar he wouldn’t be there. It seemed that he hadn’t told the teachers either; they were just clueless when Oscar asked them.

Oscar wasn’t too happy about coming home after school that day either. He was unhappy because of the test. Oscar hated the rain, but it didn’t seem to want to stop. The rain meant he wasn’t able to stay out and play, but the friend he wanted to hang out with had gone missing as well. So he had no one to play with anyway.

‘I’m back!’ he announced to an empty house.

His mother was still nowhere to be found.

Oscar’s smile fell from his face. That was strange. Usually, his mother would have someone come over to look after him if she was away for long.

He shrugged it off.

‘I’ll worry about it later,’ he told himself.

He started playing his favourite video game. He ate lots of snacks, skipped dinner and went to bed late that night.

Morning came. The wind and rain knocked and banged harder against Oscar’s window.

‘It’s Saturday!’ Oscar woke up with an excited smile. He remembered that he and his mother had been planning a day out for weeks now.

Oscar ran downstairs but stopped short when no one was there. He finally began to worry. That day, Oscar looked everywhere his mother could have gone. He called everyone he knew, but no one answered. He asked around town, but hardly anyone was around because of the rain. Of the people Oscar knew and could find, no one had seen his mother.

Oscar returned home, feeling hopeless. He realised that he was crying as he looked for something to eat under all the mess in the kitchen. The house was a disaster. Oscar couldn’t even find his favourite toys under so much rubbish.

Oscar was too upset to sleep that night. He looked out at the sky through the window.

‘I’m sorry. I’m so sorry,’ he said aloud. ‘I didn’t mean for everyone who cares about me to go away. I wanted a break, but not like this! I wish for everything to go back to normal. Please, please, I didn’t mean for this to happen.’

The following morning, the sun shone brightly onto Oscar’s sleeping face. He woke up feeling refreshed. He had forgotten everything for a moment. Suddenly, he remembered.

Oscar ran downstairs, two steps at a time, trying not to trip as he called out for his mother.

He stopped on the landing as he saw her. She smiled as he ran to hug her.

She laughed and held him tight. ‘Did you have a bad dream, honey?’

He shook his head as he hugged her tighter and she laughed harder,

Oscar had missed that laugh so much.

‘Now come on. It’s Friday, get ready for school or you’ll be late again.’

Oscar kissed her on the cheek.

‘Later!’ was on the tip of his tongue. It was such an old habit. However, he took a deep breath and said, ‘Okay! I’ll get ready now.’