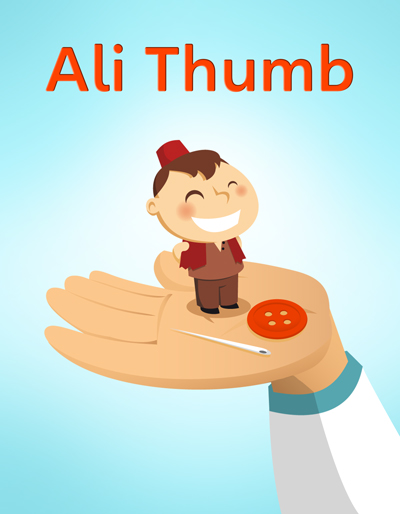 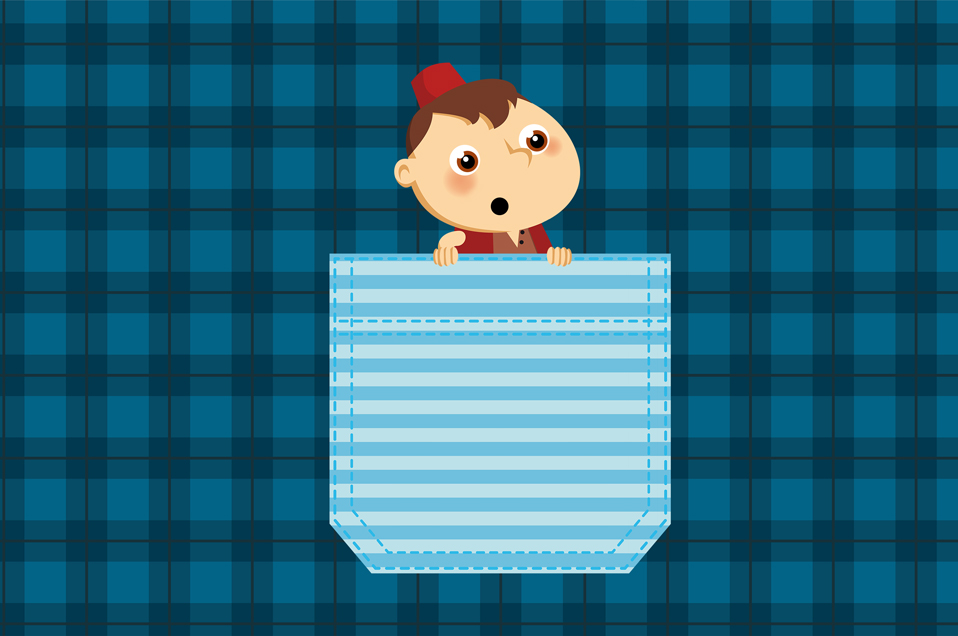 Once upon a time, a couple had a baby boy whom they called Ali.

The baby came as a surprise to his parents, because when he was born he was no bigger than a thumb!

The mother and father were both very upset to begin with, but then they thought to themselves,

'This is what God has given us, and one day our son will grow up to be a big, strong boy.'

But the years passed and Ali did not grow at all. He remained as little as a thumb.

Every evening at dinner, the mother would set a place at the table for her son.

She would place a tiny plate in front of him and fill it with a teaspoon full of soup.

Ali also had a tiny cup which his mother filled with a single drop of water.

Everything was fine when the family were at home, but the mother and father were ashamed of their son, thinking that if anybody saw him they would tease the young boy. So they kept him indoors, always hidden from view.

He was still as little as a thumb, but his voice had grown very deep and very loud.

In fact, if anybody was ever to hear their son speak, they would think it was the voice of a giant man.

Ali was a very sad young man because he had no friends and had to spend all of his time hiding inside of his parent's house.

One day, Ali's father was getting ready to go to the market in the next town. The old man planned on spending the night in a hotel because he would not be able to make the journey there and back before nightfall.

Ali pleaded with his father to take him along on the journey, but his father looked very anxious at the idea.

'We never took you out until this day and I am not sure that I can do it now,' he said. 'How can I protect you and hide you from other people?'

'It will be easy,' answered Ali, in his deep, booming voice. 'You can keep me in your pocket and nobody will ever know I am there. You can make a little hole in the material so I can breathe and so that I can see what is going on and enjoy all the new sights of the world.'

Ali's father realised how excited Ali was at the idea of leaving the house, and because of this he found it impossible to say no to his only son.

The old man made a very small hole in his shirt pocket and helped Ali to climb inside.

The mother handed over the bags for the journey and kissed them both and wished them good luck. Then Ali and his father set off towards the market in the neighbouring town.

After travelling all day, Ali and his father came to the hotel by the side of the road.

'We will get ourselves a room here for the night,' said the father, 'and tomorrow we will go to the market early in the morning before returning back home.'

'I cannot believe I get to stay in a hotel!' exclaimed Ali.

The young man was very excited because he had seen so much on his journey already and he had never slept anywhere apart from his home.

Ali's father paid for a room and took his bags up the stairs to prepare for dinner.

After the old man had unpacked and washed, and with Ali still hidden in his pocket, he went down to the dining room in the hope that he might also sneak some food for his little son.

Then something quite unexpected happened. Just as all of guests had seated themselves for dinner, a group of thieves entered the hotel.

The mean-looking men, three in all, pointed guns and gave orders that every man and woman should surrender their money and any valuables they possessed.

All of the guests were very scared, including Ali's father, but they did as they were told and began reaching for their wallets and jewellery, placing them on the tables to be collected by the thieves.

Suddenly, there was a very loud and very deep voice from out of nowhere.

'Drop your guns!' commanded the voice. 'I am coming in there and I am going to catch you and give you over to the police.'

Nobody knew where the voice was coming from. The thieves looked all around the dining room but could not find a soul.

Then the voice came again, even louder this time. 'I will make you pay for your wicked ways. I will make sure that you spend many years in prison.'

Because the thieves could not tell where the voice was coming from, they convinced themselves that it must belong to a ghost.

And if there was one thing the thieves were scared of even more than the police, it was ghosts.

All of a sudden, the thieves dropped their guns and ran from the hotel and disappeared into the night.

Even though the guests were happy that the robbers had fled, they too were afraid of ghosts and wanted to run away to their rooms and hide.

And with that, the old man reached into his pocket so that Ali could climb into his hand. Then he placed Ali gently down on the table so that all of the guests might say hello.

'I am sure the robbers will not return,' said Ali in his deep, booming voice, a big smile on his face due to all of the adventures he was having.

The guests were very surprised and very curious to meet a boy who was no bigger than a thumb.

But more than anything, they were all very grateful to Ali for saving them from the thieves, and they thanked him and shook his hand and said to his father how proud he must be to have such a brave son.

In the morning, as they left the hotel for the market, Ali's father took his little son out of his pocket and placed him up on his shoulder.

All morning at the market, and then on the way home, the old man had to stop many times to introduce Ali to passersby. And he was very proud and told them all how his son had saved everybody from the three thieves.

When father and son arrived home that evening, Ali's mother looked very worried that Ali was sitting up on her husband's shoulder.

'What if somebody should see him?' she asked her husband.

But the old man smiled and explained to his wife what adventures the pair had experienced at the hotel, and how Ali had saved the day and scared off the thieves.

'It has been a very great mistake to be ashamed of our son. We should not have kept him hidden in the house for all these years. We should be proud of Ali and all of the things that he is capable of doing.'

Ali's mother was indeed very proud when she heard the story of her son's bravery, and promised never to hide him away or be ashamed ever again.

Ever since that day, Ali Thumb has always travelled on his parents' shoulders wherever they go, and he has seen and done many things and had many adventures.