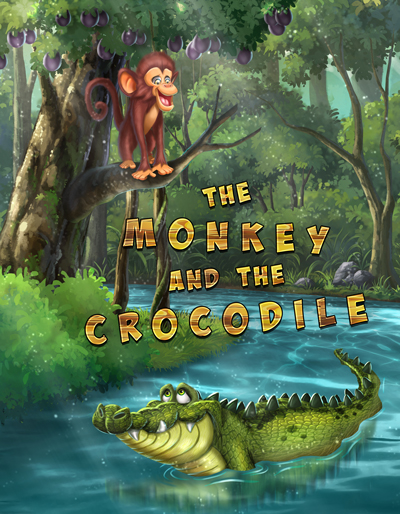 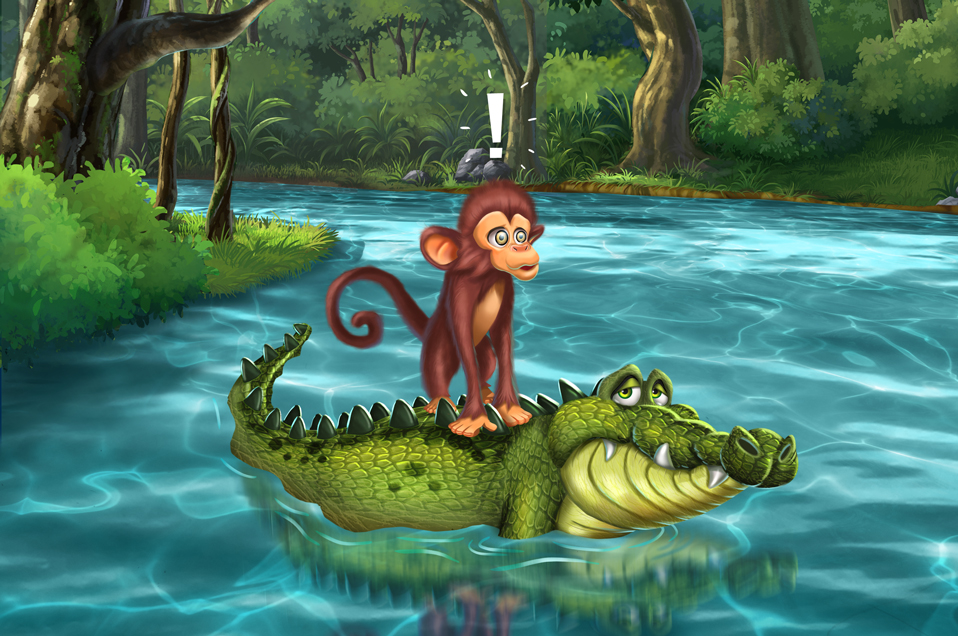 Once upon a time, a monkey lived in a tree by a river. The monkey was alone as he had no friends or family but he was happy and content. The tree gave him plenty of sweet jamun fruit to eat. It also gave him shade from the sun and shelter from the rain.

One day, a crocodile was swimming up the river. He climbed on to the bank to rest under the monkey's tree.

'Hello,' called the monkey, who was a friendly animal.

'Hello,' replied the crocodile, surprised. 'Do you know where I can get some food?' he asked. 'I haven't had anything to eat all day and I am hungry.'

Now you might think that the crocodile would want to eat the monkey, but this was a very kind and gentle crocodile and the thought never entered his head.

'I have lots of fruit in my tree. Would you like to try some?' said the monkey, who was also very kind.

He threw some jamun fruit down to the crocodile. The crocodile was so hungry that he ate up all the jamuns even though crocodiles don't usually eat fruit. He loved the sweet tangy fruit and the pink flesh made his tongue turn purple.

'Come back whenever you want more fruit,' said the monkey, when the crocodile had eaten all he wanted.

Soon the crocodile was visiting the monkey every day. The two animals became good friends. They would talk, tell each other stories and eat lots of sweet jamuns together.

One day, the crocodile told the monkey about his wife and family.

'Please take some fruit for your wife as well when you go back today,’ said the monkey.

The crocodile's wife loved the jamuns. She had never eaten anything so sweet before but she was not as kind and gentle as her husband.

'Imagine how sweet the monkey would taste as he eats these jamuns every day,’ she said to her husband.

The kind crocodile tried to explain to his wife that he could not possibly eat the monkey.

The crocodile's greedy wife would not listen. To get her husband to do what she wanted, she pretended to be ill.

'I am dying and only a sweet monkey's heart can cure me!' she cried to her husband. 'If you love me, you will catch your friend the monkey and let me eat his heart.'

The poor crocodile did not know what to do. He did not want to eat his friend but he could not let his wife die.

At last, he decided what he must do and the next time he visited the monkey he asked him to come to meet his wife as she wanted to thank him in person for the lovely jamun fruit.

The monkey was pleased but said he could not possibly go because he did not know how to swim.

'Don't worry about that,' said the crocodile. 'I'll carry you on my back.'

The monkey agreed and jumped onto the crocodile's back.

So the two friends moved out into the deep wide river.

When they were far away from the bank and the jamun tree, the crocodile said, 'I am so sorry but my wife is very ill and says that the only cure is a monkey's heart. I am afraid that I have to kill you, although I will miss our talks.'

The monkey thought quickly and said, 'Dear friend, I am very sorry to hear of your wife's illness. I am glad that I will be able to help her but I have left my heart behind in the jamun tree. Do you think we could go back so that I can fetch it?'

The crocodile believed the monkey. He turned and swam quickly to the jamun tree. The monkey jumped off his back and climbed into the safety of his tree.

‘I thought you were my friend,' he called. 'Don't you know that we carry our hearts within us? I will never trust you again or give you fruit from my tree. Go away and don't come back.'

The crocodile felt foolish. He had lost a friend and a supply of good sweet fruit. The monkey had saved himself because he had thought quickly. From that day on, he never trusted crocodiles again.