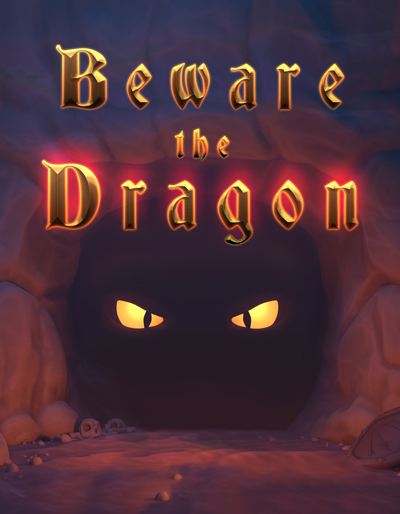 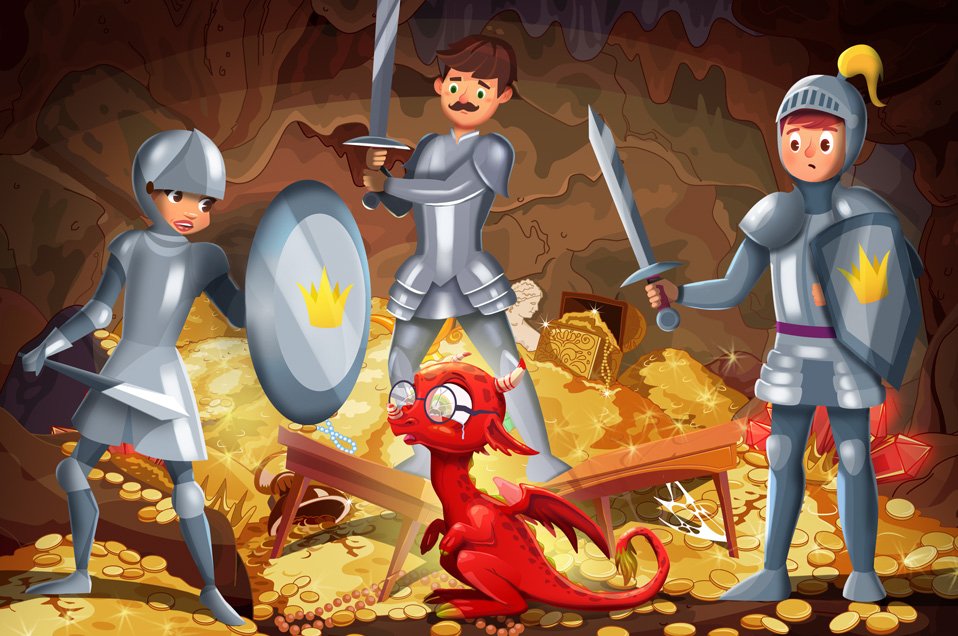 Evening had fallen across the land. Sir Adi, Dame Sofia and Sir Thomas were suffering from empty stomachs and sore feet. The trio were brave knights who, having travelled all day, needed somewhere to stop for the night.

By chance, they found a village tucked away in the shadow of a tall, dark mountain.

As they walked into the village, they noticed how the dark mountain loomed over everything. Although the street lights glowed, there was no one in sight. Each building had its doors and windows locked, and curtains had been drawn tight.

‘What a strange village. There must be someone around,’ Sir Adi said.

‘Of course, there must be, why else would the lights be on? We must find somewhere to stay, I can’t take this any longer,’ Dame Sofia grumbled, stopping to rub her aching feet.

Sir Thomas, who had walked on ahead, spotted a large building with a sign declaring INN in large red letters.

‘There,’ he called back to his friends, pointing to the inn.

The three walked up to the front door and put their ears to it. They could hear quiet chattering and the clinking of glasses. Dame Sofia knocked on the door. The door groaned as it opened, revealing an older woman.

‘Don’t you know you’re supposed to come in through the back?’ The woman started. She looked at the knights with a puzzled expression, ‘What are you all doing here?’

‘We are looking for somewhere to eat and rest. Can we please stay here?’ Sir Thomas asked.

The woman motioned the three inside and locked the door behind them. They found themselves in a small restaurant in which the villagers sat around talking and drinking together. The woman led them to a small table by the fire and brought them something to drink.

One of the villagers raised his voice. ‘Aye, the dragon must have been here last night. That’s the only way Ted’s house could have burned down.’ His words travelled from his dirty beard and found their way to every corner of the room.

The three knights turned their attention towards the man.

‘Ugly great thing,’ the villager snorted. ‘He comes down here every night to try and get a meal.’

‘Have you seen this dragon?’

‘No, but my uncle has. The old man says he’s a big beast, bigger than a house, with icy scales, huge red eyes and claws.’

‘Oh shut it, your uncle’s a liar. Everyone knows his eyes are yellow!’ spat the man sitting next to him.

‘Has he carried anyone off?’ Sir Thomas asked.

‘Not yet. Unless someone’s forgotten to lock everything up tonight,’ grunted the bearded man. ‘But how long do you think it’ll be before he comes for us all? Everyone knows dragons breathe fire. Locked windows and doors can’t keep him out forever.’

The knights looked at each other.

‘Is there any way we could help them?’ Sir Adi whispered.

‘We need to help these people,’ Dame Sofia declared. She stood up and addressed the room. ‘If this dragon is causing you trouble, we will go and sort it out.’

The villagers stared at her.

The bearded man laughed. ‘Really? Against a dragon? Are you mad?’ he said.

‘I am a knight. I fear no dragon.’ Dame Sofia glared at him. His laughter faded.

Sir Adi and Sir Thomas looked at each other.

Soon the innkeeper served them dinner. As they ate, they noticed the rest of the room murmuring, sneaking glances at them. Just as they finished, a plump villager approached their table.

‘If you really mean it, the dragon lives in a cave at the top of the mountain. My pa’s old friend went up there once. He says the cave is littered with bones.’

‘We mean it, and we will be fine. Thank you for the tip,’ Dame Sofia said. The knights stood up, paid for their meal and walked out of the inn. They headed towards the dark mountain. They lit torches and marched up an old broken road to the summit.

Owls screeched in the night. Blackened grass and dead trees edged the path. Even the air felt scorched against their skin. Up they climbed for many hours. Eventually, they reached the peak where the dead grass gave way to black rock.

A cave entrance glowed red on the mountaintop.

‘Do we have a plan?’ Sir Adi asked Dame Sofia.

In they went and found that the cave sloped downwards in a spiral. From the light of the torches, they could see soot on the walls and claw marks scraped across the floor.

The air was heavy with smoke. Down and down the three went until they reached a curtain of some white material, tied together with rope.

Sir Adi looked closer. The curtain was too transparent to be made of bone.

‘Some kind of rock?’ he muttered.

A roar ripped through the air. It scattered the curtain of white rock and knocked the knights backwards for a moment.

As they regained their balance, together they pushed through the curtain to find themselves in a tall cavern.

Ore of a thousand different colours streaked the walls, glittering in the firelight. Gemstones of all shapes and sizes stood in cairns on the floor. In the middle of the room sat a mountain of gems so tall it touched the upper reaches of the cavern. The knights looked around in awe; they had never seen such riches.

‘Do you think this is the dragon’s home? If it is such an ugly monster, how could it have created such a wonderful place?’ Sir Thomas asked.

They moved around the cairns to find a small fireplace carved into the wall behind a table and chairs. There were some tools, a curious pair of glasses and gemstones scattered across the tabletop.

Another roar boomed from the gemstone mountain. Yet, this time it ended in what was unmistakably a snore.

‘It must be around here somewhere,’ Dame Sofia said.

The three knights approached the shimmering heap and walked around it.

‘Then let’s start digging,’ Dame Sofia said. She scooped up the gems and threw them away. Sir Adi and Sir Thomas joined in, sending gemstones flying around the room. The precious stones flew into the furniture and knocked the torches from the walls. The jewels at the top of the pile tumbled down and crashed into the smaller cairns of stones, knocking them over.

The knights couldn’t see a dragon inside.

At that moment, Dame Sofia discovered something scaly and red. She tugged at it, and the gems rolled away, revealing a dragon no bigger than a large dog. It was covered in scales as dark red and glittering as rubies.

The dragon awoke all at once.

‘Who are you? Please let me go ...’ the dragon started. Her green eyes widened as they darted around the room. ‘My home? What have you done?’

‘Aren’t you the dragon that has been terrorising the village?’ Sir Thomas asked the creature.

‘The village? I never go down there; they are too mean. I just stay up here and make jewellery.’

The dragon looked towards the desk and wrenched herself from Dame Sofia. The desk had broken into many pieces under the weight of the gemstone deluge. The dragon padded around and picked up the glasses. She perched them on her snout and tried to peer through the glass but found that they had cracked beyond repair.

The dragon shrieked. Throwing the glasses away, she buried her head in her claws. She sank into a ball, sobbing and sending tiny sparks of fire ricocheting across the floor.

‘What have you done? I cannot see without my glasses. You’ve destroyed everything! Go away, stupid humans!’ she bawled.

The knights looked at each other.

‘This creature seems harmless,’ said sir Adi. ‘I doubt she could carry off anything larger than a chicken and she doesn’t seem to have the spirit for it.’ He glanced at the heartbroken dragon and raised his voice to carry over the sound of her sobs. ‘The villagers must have lied, what can we do?’

‘We must go back to the village and get the people to help us fix this,’ Dame Sofia said, turning to face the sobbing creature. ‘Don’t worry. We’ll be back.’

The three knights hurried from the cave and climbed down the mountain towards the village. Morning arrived as they descended. The villagers had come out of their homes and were wandering the streets.

The knights rounded up as many of them as they could find and explained what they had seen and done.

‘Rubbish!’ one villager cried out.

‘That dragon is enormous and dangerous!’ another called out.

‘If you don’t believe us then, as knights of the land, we order you to follow us and see for yourselves,’ declared Dame Sofia, raising her sword into the air.

The villagers grumbled, but they knew they could not disobey a knight’s orders. The knights led them out of the village, up the mountainside and down into the cave. They reached the dragon’s cavern and found it in as much of a mess as before. The small dragon still sobbed in the ruins of her home.

‘Is that really the dragon?’ the bearded man asked.

The villagers looked at each other. One of the children waddled towards the crying dragon, threw his arms around it and started to cry too.

‘What have we done?’ a villager asked.

‘The poor thing. We must fix this,’ another said.

‘I’m a carpenter,’ one villager piped up. ‘I can make you a new table and chairs.’

‘I’m an optician, I can fix your glasses,’ another said.

The dragon lifted her head and smiled. ‘Thank you.’

The knights looked at each other and left the cave, marching away to new adventures. Having brought peace and justice to the village, they went away feeling confident about the change in the people who lived there. Never again would they blindly believe rumours or pre-judge anybody.