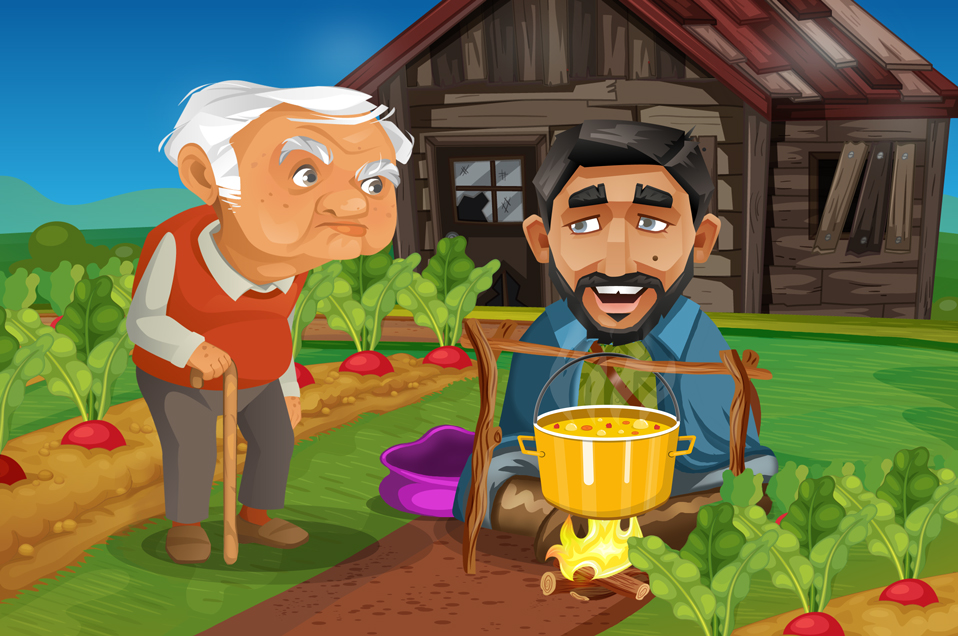 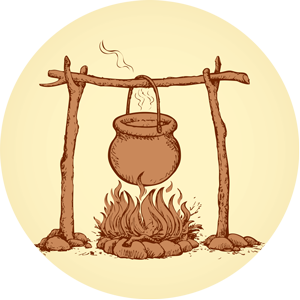 A long time ago, in a village not too far from a stream, a kind-hearted soldier was trudging down a dusty lane. His movements were slow as he had been walking the whole day. He would have loved nothing more than to eat a nice, hot meal. As he came across a quaint little house on the side of the road, he thought to himself, ‘The person who lives here must have some extra food to share with a hungry traveller like me; I think I’ll go and ask.’

And so the soldier walked up the cobbled path towards the wooden door, past the garden full of growing cabbages, potatoes, onions and carrots. Once he reached the front of the house, he raised his hand to knock when the door suddenly opened. On the other side stood an old man. His hands were on his hips and he had a frown on his face.

‘What do you want?’ said the old man, rudely. Still the soldier smiled at him.

‘Hello there, I am a soldier from a village not too far from here. I have come to you to ask if you have any food you would be able to spare.’

The old man looked the soldier up and down and replied very bluntly. ‘No. Now go away.’

The soldier was not put off by this – he smiled once again and nodded his head. ‘I see, I am only asking so I will have a few more ingredients for my stone soup, but I guess I will have to have it plain. Just as tasty though!’

The old man scrunched up his eyebrows. ‘Stone soup?’ he asked.

‘Yes sir,’ the soldier replied, ‘now if you’ll excuse me…’

The soldier walked to the middle of the path and hauled an iron cauldron from his belongings. Once he had filled it with water he began to build a fire under it. Then with great ceremony, he drew an ordinary-looking stone from a silk bag and gently dropped it into the water.

The old man watched all of this from his window, bewildered.

‘Stone soup?’ he asked himself. ‘Surely there is no such thing!’

And after a while of watching the soldier stir the water with a small stick, the old man walked out and asked the soldier, ‘What are you doing?’

The soldier took a sniff of the steam coming out of his pot and licked his lips in anticipation, ‘Ah, there’s nothing I like more than a tasty bit of stone soup.’ He then looked up at the old man, adding ‘Of course, stone soup with a bit of salt and pepper is hard to beat.’

Hesitantly, the old man went inside and returned with salt and pepper, slowly handing it over to the soldier.

‘Perfect!’ cried the soldier as he sprinkled them into the pot. He stirred it once more before looking over to the old man again, ‘But you know, I once tasted this amazing stone soup with cabbage.’

The old man then approached his cabbage plants and picked the ripest cabbage, handing it to the soldier.

‘Oh, how wonderful!’ the soldier exclaimed as he chopped the cabbage up and dropped it into the pot.

He took a deep sniff of the pot and said to the old man, ‘You know, this would be a soup fit for a king with a few carrots.’

The old man said thoughtfully, ‘I think I can find some carrots,’ and he went over to his carrots and picked a handful.

The soldier was delighted when he was presented with the carrots; he chopped them up and stirred the pot once again.

And so it went on. The old man began to grow delighted at the smell from the pot as he brought onions, potatoes, and beef and so on. The soldier himself also added things like mushrooms and barley from his own bag, until he declared the soup was ready.

The old man smiled at the soldier when he offered half of the soup to him.

‘Why don’t you come inside? I have some fresh bread brought straight from the bakery this morning that would taste delicious with the stone soup,’ he said kindly.

And so the old man and the soldier shared a wonderful meal together. The soldier brought out a carton of milk from his bag and together they shared that too. The old man agreed with the soldier that the soup was better than anything she had tasted before.

It wasn’t until the soldier had given him the silk bag containing the stone that the old man realised the truth. It was never the stone that had created the delicious soup. Rather, by working together and being generous, both he and the soldier had been able to create a scrumptious meal that they could share between them.