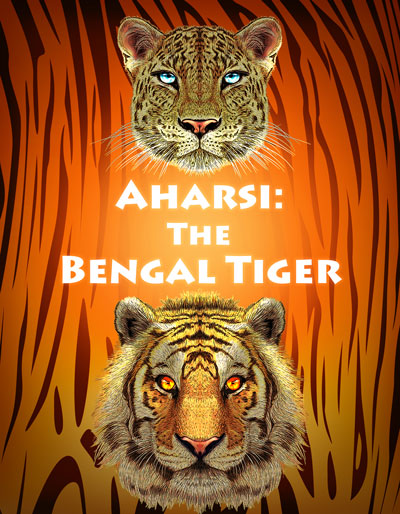 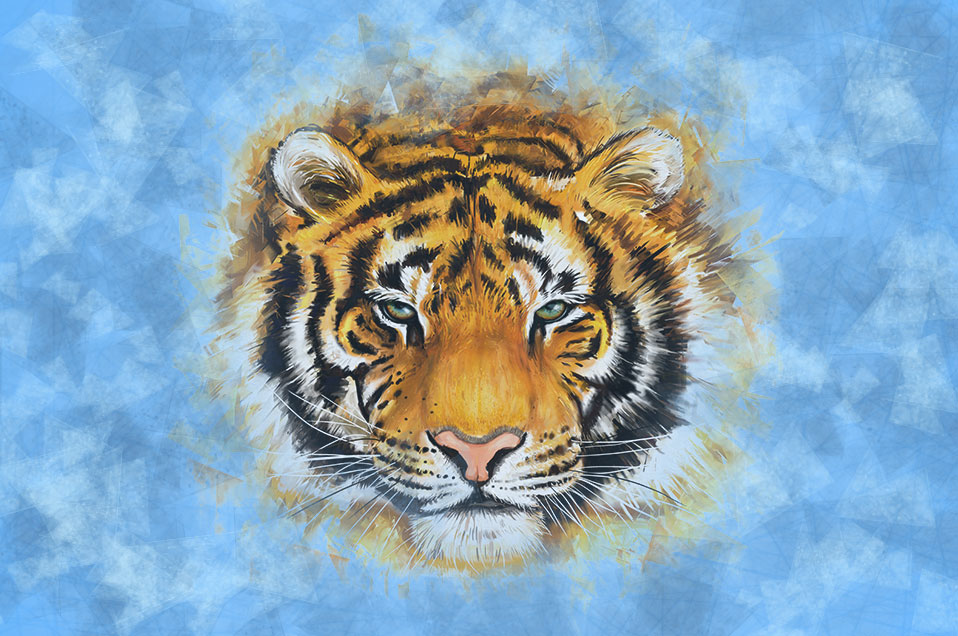 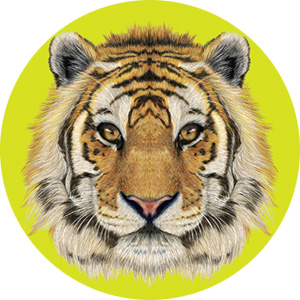 Aharsi, the big Bengal tiger, was having a good think. It was winter and he was still getting used to the feeling of ice on the pads of his paws. He shivered a little, missing the warm ooze of mangrove mud.

Aharsi was missing lots of things. He missed the way the sun made his coat glow a regal orange, or how the glare of midday brightness made his black stripes look so bold and striking like black lightning bolts. He missed dozing in the evening heat and catching the last shafts of sunlight as they cut through the jungle vines. He wondered if he would ever again hear Doyel birds chattering in the trees, or catch the scent of ripe mangoes on the breeze. It was these fleeting, poignant moments that the Bengal tiger was trying so hard to picture in his mind. Aharsi missed his home.

His whiskers bristled as he let out a big sigh, sending the starlings that had been pecking at the frozen ground scattering up into the grey sky. Three hours had passed, and even though he thought very hard, all the tiger had managed to remember was some vague half images of mangoes and mangroves. He was worried that he was forgetting all about his old home altogether.

When Aharsi first arrived at the zoo in England with his mother and father, everything was so exciting. He lapped it all up; his amber eyes burned with curiosity as he jumped from tree to tree or smelled each flower or pawed at each tiny insect.

‘Now just calm down, Aharsi,’ his mother would say. ‘You have come a long way. There is plenty of time to explore; now you must rest.’

But the young tiger was too busy to rest. There were new animals to meet, new trees to climb. There was so much to learn about his new home. Before the sun went down on that first day, Aharsi had bounded around all of the animals’ cages, asking them question after question, absorbing the strange exotic colours of the paradise birds and smelling the sweet and unfamiliar smell of the hay in the rhino stalls. But the more he explored, the more Aharsi realised how different his new home was to where he’d come from. And now the young tiger was worried that he’d lost all of the precious memories he had of his homeland. He was worried that he'd forgotten all about being a Bengal tiger.

Aharsi squeezed his eyes closed and flicked his tail purposefully from side to side. ‘Remember,’ he told himself. ‘Try to think harder!’

Hours passed, the day grew dimmer and the rest of the animals started to settle down in the twilight. After a while, Aharsi felt someone looking at him. He opened one eye, keen to stay as focused as he could; trying to remember, just trying to remember. It was Zody the Leopard.

‘What are yooouuu doing?’ came the deep, purring voice.

‘I’m remembering,’ Aharsi answered. ‘Now if you don’t mind…’ Aharsi closed his eye once more and tried to concentrate even harder.

‘Yes. I’ve forgotten all about being a Bengal tiger, and where I’ve come from, so I’m trying to remember it before it’s all gone forever. Now if you don’t mind…’

Once again Aharsi squeezed his eyes shut and tried to summon images from his homeland.

‘You won’t get faaar with your eeeyes closed,’ said Zody.

Aharsi opened his eyes wide and looked quite annoyed. ‘I won’t get anywhere unless you leave me alone to think!’ he said. ‘You wouldn’t understand anyway, you’re not even a tiger, let alone a Bengal tiger! You’re a leopard!’

‘You silly animal!’ said Zody, rattling with laughter. ‘Look there!’ She pointed to a shiny slick patch of ice on the hard ground.

Aharsi stared back at Zody in some confusion. ‘I think you may have gone a bit bonkers, Zody,’ he said, and just then he almost wanted to laugh himself.

‘If you want to remeeember how to be a tiiiger,’ said Zody in a kind voice, ‘just look!’

‘Fine, if you’ll leave me alone then I’ll look.’

Aharsi bent his neck a little and peered into the glassy ice mirror on the ground. Zody purred over his shoulder.

Aharsi noticed Zody’s eyes getting brighter as she pictured the sun-baked savanna and lush green jungles of her home. ‘When I see my spots,’ she continued, ‘I see my whole history. And I will always have my spots.’ She winked at Aharsi. ‘After all,’ she said, ‘a leopard never changes its spots!’

‘But don’t you ever get homesick or sad?’ the young tiger asked in a slight mewl. ‘Everything is so different here.’

‘We all get homesick,’ Zody replied while pawing at the ice, ‘but look here at our reflections. We are not sooo very different. You are from Bengal and I am from Africa, but see how we have the same whiskers. And see here…’ Zody cut an impressive jagged line in the ice with her sharp claws and then raised them up so that they shone in the fading light. ‘We both have theeese,’ she said with a grin.

Just then there was a great trumpeting sound from the elephants’ enclosure in the east corner of the zoo.

‘Well that’s not so amazing,’ said Aharsi. ‘We are both cats. But I’m nothing like the elephants over there, am I?’

Zody giggled. ‘They might look different and sooouuund different, but I’ll bet even elephants get homesick too. That is something you have in common.’

Aharsi looked unsure, as he thought that the elephants were far too big and strong to ever be sad. ‘I bet they still remember where they are from,’ he said. ‘My mother told me that an elephant never forgets.’

Zody hissed and giggled and rolled around on the hard ground. ‘That’sss true!’ she admitted. ‘An elephant never forgets!’

‘And I bet the zebras don’t get scared,’ Aharsi continued, still a little bit sulky but starting to smile at his friend’s antics.

‘Haven’t you seen them running from the zookeeper’s tractor?’ asked Zody.

‘And… and the crocodiles? Do they get scared and sad too?’ Aharsi asked.

‘Haven’t you seen them hiiiding beneath the water?’ Zody replied as she gave her friend a playful bump with her nose. ‘We aaall miss home sometimes, Aharsi. But that is why we all look different. We are different so that we can remember. Look at me. I have this beauuutiful tail which reminds me that we leopards are the best at balancing up high in the trees.’

Aharsi felt much better and soon began to rumble with a deep purr. ‘And I will always have my stripes for hiding in the tall grass. We tigers are the best hunters in all of Bengal!’

‘Your stripes go wherever you go, Aharsi,’ Zody said with a smile.

The young tiger trailed off a little, his eyes were growing heavy and he yawned without noticing. It was evening now and the zoo was alive with the crooning calls of countless animals. Some were stripey, some were spotty. Not any one of them was the same as the other. As night fell and a million stars filled the sky, Aharsi began to understand that though all of the animals were different, they all felt the same sometimes. That is when he knew that he would never be alone, and that is when he knew he would always carry his home in his heart forever.