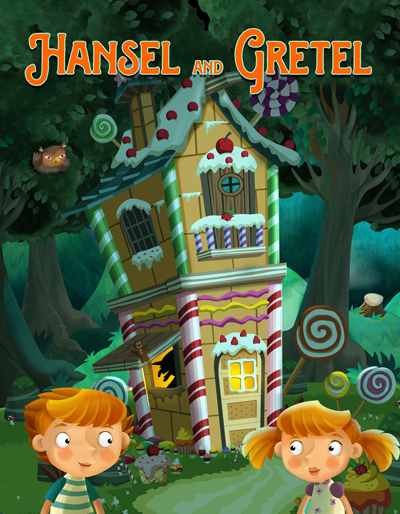 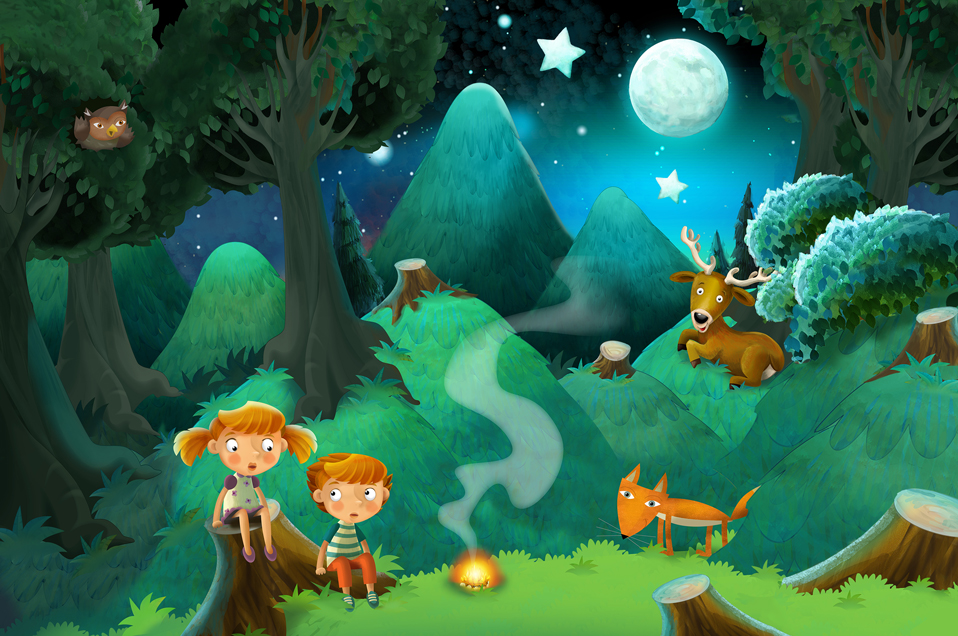 Once upon a time, there lived a poor woodcutter. He lived in a tiny village near a forest with his two children and his second wife. The children were called Hansel and Gretel. Hansel was Gretel’s big brother.

One day, they had no more food. The woodcutter’s wife said to him that they must send the children into the forest. She wanted them to be lost forever. Then she and the woodcutter would have more food to eat.

Hansel heard his wicked stepmother talking. He went outside and filled his pockets with little white pebbles.

The next day the woodcutter and his wife took the children into the forest. The woodcutter wasn’t happy about leaving his children, but his wife made him.

So Hansel and Gretel were left all alone.

Night fell and it grew cold. Gretel began to cry.

As they had walked into the forest that morning, Hansel had dropped a trail of white pebbles. Luckily, the moon was bright and it shone on the white stones. The children followed the trail home.

The woodcutter’s wife was angry when she saw the children. She shouted at her husband and told him to take the children back into the forest and lose them. The woodcutter was upset but he was afraid of his wife. He agreed to do what she said.

As they were pushed out of the door, Hansel grabbed a slice of bread. When they walked back into the forest, Hansel dropped crumbs of bread. He was hoping to follow the trail back again.

When they got to the middle of the forest, the children’s father muttered an excuse and told them he had to leave.

Again, night fell and this time there was no moon. The children huddled together at the foot of a big tree and fell asleep until morning.

“Don’t worry,” said Hansel the next day. “We will follow the trail of bread and go home.”

But the trail of bread wasn’t there. Hansel hadn’t thought about the birds that would eat the crumbs. This time the children really were lost.

The children wandered through the forest. After a long time, they found a funny little house in the middle of some trees. It looked as if it was made of gingerbread and finished with icing.

Hansel broke a piece off the wall. He ate it – it was tasty!

Then Gretel broke a piece off the window sill. It tasted so good!

They broke off more bits: biscuits, cookies and sweets.

Suddenly, the door opened and an old lady came out. She wasn’t a kind old lady … oh no! She was a witch!

The evil witch planned to bake the two children in her oven and eat them!

However, she thought they would taste better if they were not so thin. She wanted to feed them up and eat them when they were fatter.

Every day for weeks, the witch gave the children lots of food.

She made Gretel clean the house, and she locked Hansel in a cage. Every night she would ask to squeeze Hansel’s finger to feel how fat he was getting.

The witch couldn’t see very well. She needed to feel Hansel’s finger instead of just looking at him.

Hansel was clever, though. He kept an old chicken bone in his pocket. Every night, he let the witch squeeze that instead of his finger. The witch was angry that Hansel never seemed to get fatter.

One day the witch was tired of waiting for Hansel to fatten up. She lit her oven so that she could roast the boy and have a tasty meal.

She opened the oven door and peered inside to check it was hot.

As the witch bent down, Gretel ran across the room and pushed her inside the oven. The little girl slammed the oven door! CLANG! The witch was trapped!

Gretel searched the gingerbread house. It was filled with cakes and sweets. In one room, she found chests filled with gold. Gretel found the key to Hansel’s cage. She set her brother free. The children filled their pockets with as much gold as they could carry and set off.

For two whole days, the children searched the forest. Finally, they found their home and saw their father! He was happy to see them and said that their stepmother had gone away. Hansel and Gretel had found their way home. They were never hungry or poor again.